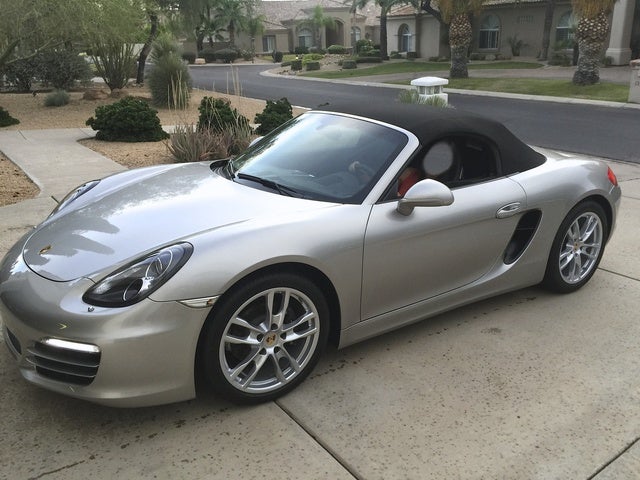 It’s a brand-new Boxster, and some people aren’t too happy about that. It’s not performance or looks that are in question, but rather that esoteric “feel” we’re always chasing. Nope, the new Boxster looks great and is definitely faster than the old. More specifically, it’s nipping at the heels of a couple of 911 trims, which always seems to make Porschephiles nervous.

The new life is thanks to a redesigned chassis, a power increase and a lot of weight saved, meaning the 2013 Boxster is lighter, longer, lower and less likely to lose at the stoplight than last year.

Shall we start with aesthetics? It’s been 8 years since we’ve seen a real redo on the Boxster, and as this 2-seater tacks on the years, we’re starting to see the signs. Gone is the baby fat that resulted in gently flowing curves of sheetmetal. The Boxster now has a well-defined jaw and some hard edges around the sides. After all, core strength is integral to health, and never more so than with a midengine roadster. Thankfully the chassis is stronger this year as well, but let’s not leave aesthetics just yet.

You’ll be sure to hear about the Boxster’s automatic rear spoiler, even if you’re not a Boxster fan. It blends aggressively into the new rear brake lights, and manages to still disappear with grace. It will be copied. And if you’re particularly particular, you’ll even notice shades of supercar sheetmetal, as the new Boxster looked backward to the Carrera GT and forward to the 918 Spyder for visual inspiration. Pay particular attention to bulging fenders and that rear deck.

Inside, things are classier than before, with a high center console stolen from the 918 cutting through the cabin alongside lowered bucket seats, with everything wrapped in soft leather. There’s a new central information display as well, with all your pertinent information from navigation to g-forces displayed. Slinking into those seats, you’ll notice more room as well, despite the roof dropping 10mm for a lowered center of gravity.

So how do you drop the roof and still increase interior space? An all-new aluminum chassis works nicely and saves some weight as well. The Boxster is longer overall by less than an inch, but front overhang has been reduced. It’s been stretched for 40mm of extra width up front and 60mm of extra wheelbase length. Despite the growth, the Boxster managed to drop about 100 pounds thanks to the high-strength/low-weight alloys used in the chassis and its new convertible power top. You are no longer legally allowed to mention said top without also commenting on its 9-second deployment, by the way.

But then Porsche has always been obsessed with speed. To wit—both Boxster engines get a power bump this year while increasing efficiency. Fewer stops at the gas station do mean you’ll get there quicker, after all. For the Base Boxster, the 2.9-liter flat 6 has been replaced with a 2.7-liter version with increased compression and 10 extra hp over last year. That’s 265 for those keeping score, but torque has sadly dropped by 7 lb-ft for 2013, a reduction we’re promised we won’t notice.

The 3.4-liter flat 6 in the Boxster S gets a polite 5-hp bump, but torque numbers remain the same at 266 lb-ft despite new intakes, exhaust and the addition of direct injection. Those changes account more for the 15% increase in efficiency with regard to both fuel economy and CO2 emissions—figures shared by the smaller 2.7 as well.

You have the choice of a traditional 6-speed, 3-pedal manual or a dual-clutch, 7-speed PDK that when coupled with the Boxster S will deliver a 0-60 time of 4.7 seconds according to Porsche. They’ve been conservative with their estimates in the past, so don’t be surprised if testers manage better, especially considering those figures were achieved in a Boxster without the optional Sport Chrono pack. That’ll get you dynamic transmission mounts—a Boxster first—a chronometer for recording lap times, adjustable throttle, suspension and stability control systems, and Porsche Torque Vectoring, a stability system that will apply brake to the inner wheel during hard cornering.

The Boxster also gets electro-hydraulic steering this year, and testers confirm it’s nearly as good as the old unit's, with a pleasantly light character at slow speeds. However, the wider track of the 2013 Boxster coupled with its longer wheelbase has been blamed for a gain in stability at the cost of some agility. This new Boxster is being called less flickable than in years past by testers, and some even say it’s strayed from its own character. There’s that elusive “feel” again, but numbers don’t lie, and the new Boxster laps the Nurburgring Nordschleife 12 seconds faster than the old Boxster. It’s hard not to be happy about that.

What's your take on the 2013 Porsche Boxster?

Users ranked 2013 Porsche Boxster against other cars which they drove/owned. Each ranking was based on 9 categories. Here is the summary of top rankings.

Have you driven a 2013 Porsche Boxster?
Rank This Car

How Can I Speak To A Customer Service Representative?

I went thru the entire process of listing my car. I have an account. I paid. I verified with paper on the windshield/front door open. For two days it still says “processing” regarding my listing. I ...

My 2013 Porsche Boxster is a CPO car by Porsche North America. Your pop up says it is not a CPO car. Please correct that asap. Not getting credit for the CPO lowers my deal rating and my sales price...

What Are Only Recent Years Listed For Sell My Car

I AM TRYING TO ESTABLISH A PRICE FOR MY CAR TO SELL. WHY DOES YOUR MENU ONLY ALLOW CARS 2017 YR OR NEWER?

How To I Tell My Story About Buying A Car And The Seller Not Honoring The W...

Any Recommendations For Transporting A 2013 Porsche Boster S From Philadelp...