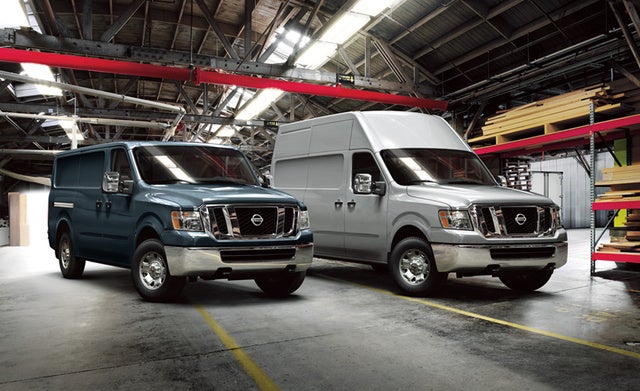 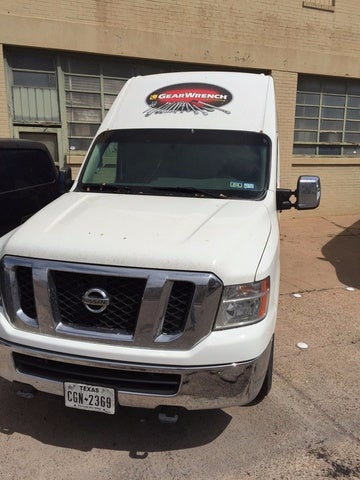 Experts like the roominess of the 2013 Nissan NV Cargo, with its storage compartments and center console, and find it user-friendly as a rolling office or office-way-from-the office. It comes with a choice of standard or high-top roof, and the latter boasts a ceiling height of 6 feet, 3 inches.

The sliding door on the side along with the rear doors offer impressive dimensions as well, and they, too, promote ease of use. The slider opens to more than 40 inches, which provides enough room for a pallet to be loaded. The NV Cargo can hold a couple of pallets. The back doors open to 243 degrees, and door magnets help secure and keep them from swinging shut because of wind or uneven terrain.

A 4.0-liter V6 good for 261 hp and 281 lb-ft/torque or a 5.6-liter V8 with 317 hp and 385 lb-ft/torque powers the 2013 Nissan NV Cargo. Either engine teams with a 5-speed automatic transmission. The engines run on regular gasoline, and some reviewers wish the vehicle offered a diesel option. The 2013 Nissan NV Cargo is rear-wheel drive (RWD), and likewise some would like to see it offered with all-wheel drive (AWD), too.

Reviewers tend to appreciate the way the 2013 Nissan NV Cargo performs on the road, though some say the steering is light, and they commend it for driving more like a large SUV than a truck. The V6 can handle most challenges, most experts say, but they rave about the power and abilities of the V8.

The design of the 2013 Nissan NV Cargo features a pickup-like front paired with a cargo van in back, which leads to a more spacious and comfortable passenger area up front. In some rival work vans, the engine is set back and squeezes things for the driver and passenger.

The 2013 Nissan NV Cargo comes with 6 standard D-rings mounted in the floor that can be used for securing cargo. The passenger seat folds flat to set up a flat work space. Cargo area lighting is available.

The base 2013 Nissan NV Cargo S is by no means fancy, but comes with a 2-speaker stereo system, power windows and locks, and manual 4-way adjustable cloth seats. Stepping up to the 2013 Nissan NV Cargo SV brings 4 speakers, keyless entry and an 8-way adjustable power seat for the driver. A navigation system that gets good marks from some reviewers is part of a technology package available for the SV that also includes a 5-inch display screen, Bluetooth connectivity, XM satellite radio and a USB port for MP3 players.

Safety features in the 2013 Nissan NV Cargo include stability and traction control, antilock brakes, dual front airbags and a tire pressure monitoring system. Dual side and side curtain airbags are available, and a rear-view camera comes with the optional technology package.

Users ranked 2013 Nissan NV Cargo against other cars which they drove/owned. Each ranking was based on 9 categories. Here is the summary of top rankings.

Have you driven a 2013 Nissan NV Cargo?
Rank This Car

FOr some reason my account was disabled, I had purchased listing on your site, please let me know what is going on