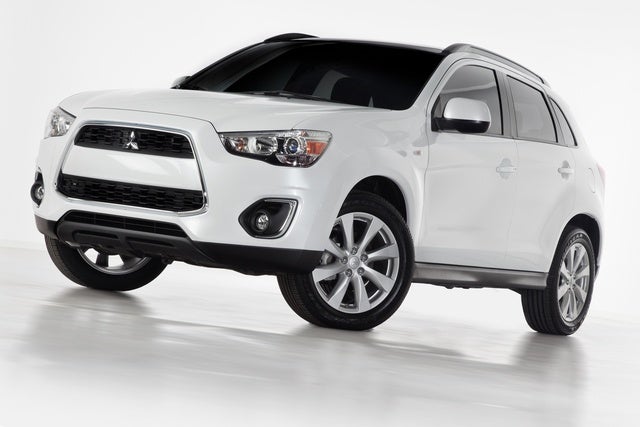 The long-loved Mitsubishi RVR continues its debut generation in the states as the Outlander Sport with a 2013 refresh and a new start in Illinois. Now made in America, the Outlander Sport gets a body lift and some new colors, alongside considerably more metallic accents, 18-inch alloy wheels for all Sports and revised driving dynamics.

You might think the lighter, shorter and later Sport is based on the 3-row Outlander, but it's actually the other way around. The Outlander Sport is a return to the original RVR platform, on which the bigger Outlander is also based. As such, 700 fewer pounds, 14 fewer inches end-to-end and 2 fewer inches between the skids and ground don't quite impact the Sport's driving dynamics as drivers would hope, but it is nevertheless just as smooth, nimble and comfortable as its bigger twin brother. Just without a third row.

The 2013 updates are an attempt to make the Sport suit its name a little better, but that's a tall task without a more powerful engine choice than the 148 hp and 145 lb-ft of torque offered by the current 2-liter 4-cylinder. That engine is peppy as a newborn pup in the Lancer sedan, but even compact SUVs like the Outlander Sport are a different animal entirely. Still, drivers of this bestseller are content to use the paddle shifters instead of waiting for its standard CVT to do the job, and the Sport can knock out a zip-to-60 in 8.8 seconds with the available 5-speed manual.

The 2013 CVT is reportedly smoother and more performance-tuned than before, as is the new multilink rear suspension, but so far nobody has their hands on one yet to tell us the grand results. The biggest gains are in the cosmetics department, especially since the 2013 Sport maintains its gritty attitude where the 2013 Outlander went for mainstream appeal. Black sills outline the redesigned front and rear fascias, and for conformity's sake, those black sills are continued along the sides for a neatly rugged look next to newly standard glistening alloy wheels.

Chrome accents the interior of the front doors for 2013, and a new push-button switch initiates All-Wheel Control for the optional all-wheel drive (AWD) in the top-shelf SE. Otherwise, front-wheel drive is the norm for an impressive 25 mpg city/31 highway with the 2012 CVT, the manual fetching just 1 less mile per gallon in city conditions. AWD knocks that down to a still-impressive 23/28. Bear in mind the new suspension and CVT could change those figures for the worse, but not likely by very much. Otherwise you can safely expect the base ES and top-shelf SE are the very same Outlander Sport you have come to know and love.

What's your take on the 2013 Mitsubishi Outlander Sport?

Have you driven a 2013 Mitsubishi Outlander Sport?
Rank This Car

I have a 2013 Mitsubishi Outlander Sport LE. I bought it in 2017 with 31,000 miles. After a week or so I noticed a strong rotten egg or sulfur smell when I would press the gas hard, smells like str...

I recently purchased a 2013 outlander sport and when I put on the cruise control for 65 mpg and set it the economy fuel light goes away which makes me think I am not getting better gas milege once ...