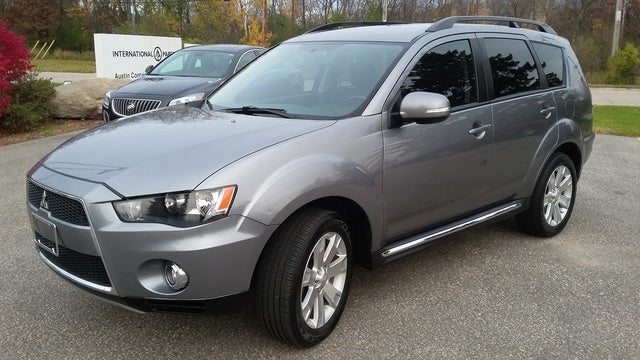 The exterior dimensions may be no different for this oversize compact crossover, but just about everything else about the all-new 2013 Mitsubishi Outlander has been remade to amaze.

Both exterior styling and interior materials move up class-wise to appease a more cultured world market, as this Outlander enters domains like China, where third-row seating is a first. Standard tech inclusions are moving on up, too, not that drivers of the outgoing model had any complaints aside from the now-discontinued hard plastics and previously miniature third row.

The now 50/50 split-folding 2-seat third row still completely lacks adult legroom, but cargo capacity doesn't seem pinched by the change. The new one-piece liftgate can be a downer for those who liked this crossover's utility with a tailgate, but softened materials beg to be babied a little more than the previously rugged plastics. Of course all-wheel drive (AWD) will still be available, but whether the 2013 Outlander will embrace more of its front-wheel-drive (FWD) aspects and continue the curve away from off-road readiness is not yet clear.

Sure the 2013 Outlander may not have the gritty character of previous models, but those streaming lines aren't just easy on the eyes—they're also easy on the fuel economy. However, engine specs are still a big question. Whatever the result, rest assured of a target milage of around 30 on the highway, just like the 2012.

European markets will receive new 4-cylinder engines with perhaps a new 6-speed automatic in addition to the previous North American continuously variable transmission (CVT), but it's safe to assume the previous engines and trannies will carry over before getting too concerned. Mitsubishi knows you like the CVT and is likely to keep it around. Although at this point it's not even clear whether the previous trim lineup carries over, we do know Mitsubishi intends to introduce a hybrid in short order.

More likely than not, the front-wheel-drive-only ES and all-wheel-drive-optional SE will return for 2013, but the previously V6-powered GT with the option of AWD may no longer suit its economy-focused maker. The top-shelf GT might end up shelved for a year, just so Mitsubishi can get a chance at revamping a more powerful engine suiting its standards. Mitsubishi does have a new V6 in a couple prototypes already, but about one year of testing might not be enough, even though some of this new tech is already confirmed in Outlanders for other markets.

Like most everything else so far, feature content is still a bit fuzzy. The Outlander gained in standard inclusions but lost a trim for 2012, and the official word from Mitsubishi indicates yet more additions. On top of the Eco driving indicator and mirror-integrated rear-view camera gained for 2012, the 2013 boasts an upgraded navigation system, telescoping steering wheel and ergonomic consoles, standard. Possible options include adaptive cruise control, xenon headlights and lane-departure and collision warning systems, with a safe expectation that most things will at least stay the same.

What's your take on the 2013 Mitsubishi Outlander?

Have you driven a 2013 Mitsubishi Outlander?
Rank This Car

How Does The Under Engine Sheild Fit

My under engine shield has come off and I need to see how it is secured. It looks as though I have to undo some nuts on the front plastic panel. Is this correct

I have a 2013 Mitsubishi Outlander. Lastnight i went to start my car and it wouldn't turn over. Today i tried again and still nothing but its saying ASC system service required. Im confused cause ...

My 2013 Mitsubishi Outlander won't start or turn over when using the key. All electronic devices in SUV seem to be working just fine but nothing happens at all when I try to start it. Could my bat...

Need Referral To A Video To Replace Back-up Light Housing On 2013 Mitsubish...

Why Is My Ignition Saying "low Battery" After I Put A New Battery In The Ig...

Changed battery but no change in the "low battery" indicator. Is there a reset or something else to do other than just change the battery?