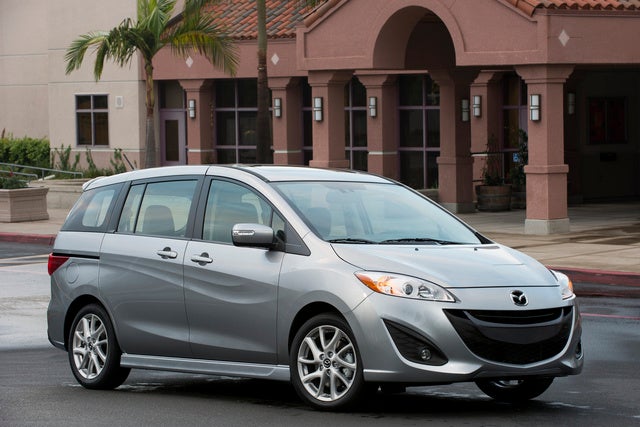 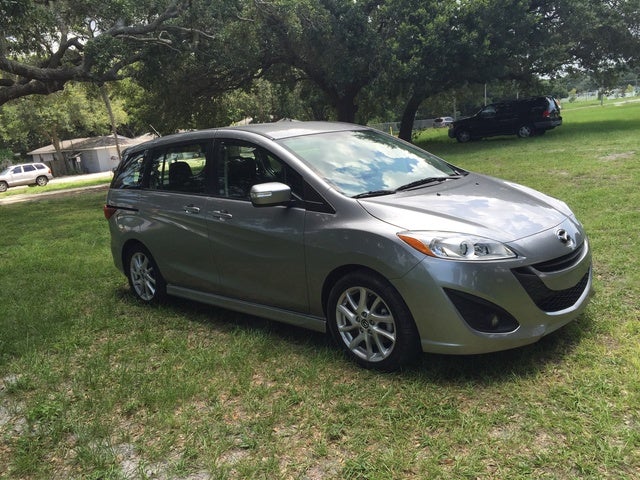 For the second year of its second generation, Mazda's 6-seater moves into 2013 with minor changes that seem to completely ignore drivers' wishes. Adding side mirrors with turn-signal repeaters, a USB port and a driver's side map pocket, the 2013 Mazda5 does nothing to appease desires for more driver storage, better power, sturdier build quality and generally more thought put into the creature comforts of this miniaturized minivan. Still, drivers don't hesitate to recognize the value in such an inexpensive and nimble option for small families. All these admittedly minor detriments to this innovative crossbreed combined add up to just one star taken off the top score in every venue for reviews.

By far the biggest reasons drivers love their Mazda5 are its utility and the versatility in that utility, but they wish it offered at least the same comforts of a sedan for the driver. The center covered bin is such a staple in modern cars that even the seatbelt appears to be designed for it—drivers complain about the armrests blocking this routine hitch, aside from leaving something to be desired in terms of utility with just a glove compartment to privately stow items up front. That said, seating 6 is a big bonus even if not for the versatility offered by its sliding and reclining second-row captain's chairs. Featuring a pop-up table that leaves class-best access to the third row when not in use, largely thanks to sliding rear doors, the kids may find themselves arguing with adults for that favored second row (especially since it offers more room for taller passengers than the front). Last but not least, folding all seats flat offers a wagon-standard 55.4 cubic feet for cargo, and if 5.6 cubes aren't enough with all seats upright, then its 50/50 split-folding third row affords plenty of options for accommodating both passengers and cargo.

In spite of its 9.5-second sprint to 60 mph, drivers call the Mazda5 fun to drive for its Mazda suspension and highly maneuverable dimensions, not to mention its compactness also making the Mazda5 easy to park in busy urban environments. Its little 2.5-liter four-cylinder powertrain fetches 21 mpg city/28 highway in most cases, but drivers note hilly country roads tend to decrease efficiency, since others manage as much as 30 mpg with the 157 horses and 163 lb-ft of torque provided through the Mazda5's 5-speed automatic. The base Sport's default 6-speed manual gets the same economy, but the automatic is also available for it, too, if you prefer, though either system is purely front-wheel drive.

Offered in Sport, Touring and Grand Touring editions differentiated by feature content, the Mazda5 comes well-equipped with features like 16-inch alloy wheels, keyless entry, cruise control and automatic climate control standard, even for the base Sport. Although you won't find features like parking sensors or cameras anywhere in the lineup or options, dreaming big in a Mazda5 can fetch features like remote ignition, an iPod interface, navigation and DVD entertainment systems, depending on your dealer. Otherwise the top-of-the-line Grand Touring offers a sunroof, satellite radio, 6-CD changer, Bluetooth, automatic xenon headlights, heated mirrors, automatic wipers, height- and lumbar-adjustable driver's seat, heated front seats and leather upholstery—all without getting anywhere close to luxury-car prices.

n2talon Handy vehicle. Gets you from A to B. Not the best gas mileage but not terrible. Very roomy. I had it for a little over 3 years with nothing but basic maintenance costs. Miss it.

Users ranked 2013 Mazda MAZDA5 against other cars which they drove/owned. Each ranking was based on 9 categories. Here is the summary of top rankings.

Have you driven a 2013 Mazda MAZDA5?
Rank This Car

My 2013 Mazda 5 mini-van does not start and the anti theft light is on when I try to turn it over. After a day or two the car will start no problems. This happens often and the only thing in common ...

Lately with the cold weather, sometimes the car will start, other times it won't start without a jump. The car is 5 years old and with the original battery, so I figured its time to change it. I ju...

I have a 2013 Mazda 5 Grand Touring. I have a car with the lock on the dashboard. Does this indicate my motor is locked? I had an oil leak. Thanks