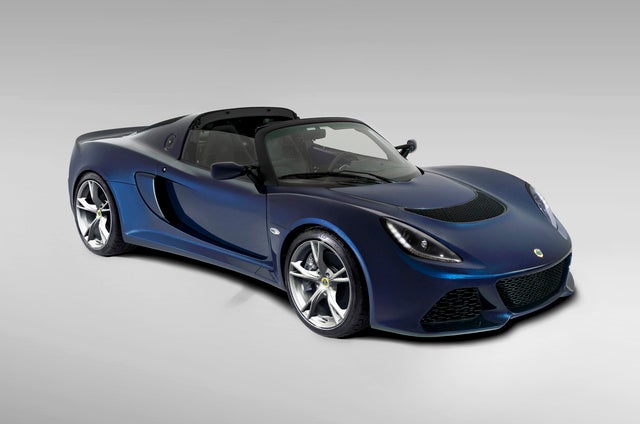 CarGurus has 5 nationwide Exige listings and the tools to find you a great deal.

Whatever is happening to Lotus of late? The world shuddered when it found out Malaysia-based Proton was going to be manufacturing for “the few who know the difference,” and when DRB-Hicom bought out Proton early last year and immediately fired CEO Dany Bahar, many thought the worst.

Couple that with the weight gain most Lotus models have seen in the last few years, and it’s no wonder a lot of longtime fans were getting the 7-year itch. But then we must look at the reason for the added heft. Sure, most models pack on the pounds after a while—it’s too easy to get lazy. Comfort kills, after all. But when the point of the pounds is a new V6 engine being stretched into the tiny Lotus layout—let’s just say there’s a lot of room for forgiveness.

Previously powered by a 1.8-liter inline 4-cylinder (I4), the Exige still put out an impressive 256 hp from that little mill. It was small, quick, nimble… but still not enough for a country that’s so used to excess it’s become a rule rather than an indulgence. An extra 100 hp should do the trick nicely, and a couple of extra cylinders wouldn’t hurt either, right?

So was born the supercharged, 345-hp, 3.5-liter V6 that currently motivates the Exige S through a 6-speed manual (really!) or paddle-shiftable automatic transmission. A bit of stretch was needed in wheelbase and track alike to fit the new lump, but it snuggles in nicely. And while the Exige S isn’t quite as nimble as its predecessor, it makes up with all that extra “oomph” and more composed manners on the road.

But the big complaint for the often track-only Exige was its paltry 145-mph top speed. With the V6, the Exige S can now touch 170 mph rolling right out of the showroom, and do it in greater comfort, too. That’s where the danger really lies.

How else to explain the introduction of the Exige S Roadster, a convertible version that’s supposed to sacrifice nothing but the roof. As much as we trust Lotus’ commitment to handling, it’s hard to believe there will be no shortcomings when chopping off the top here. What’s worse, those of us in the U.S. will never get the chance to compare, as there are no plans to offer the roadster on these shores.

And in a move that sounds like a direct answer to the comfortable rut in which Lotus seemed determined to wallow, the company has offered two new hard-edged versions of the Exige: the V6 Cup and V6 Cup R. Both are formidable foundations for a track car, but the V6 Cup is meant to be a roadworthy contender as well, even with race bits like a full FIA-approved roll cage, fire extinguisher and 6-point harnesses, 4-piston brake calipers at each corner and 2-way adjustable suspension dampers. And of course, the V6 Cup comes with Lotus’ Dynamic Performance Management system.

While the V6 Cup R gets all that minus the DPM system, it also adds another 10 hp, track-spec tow loops and a quick-release engine cover, performance brake pads, a lightweight battery and an upgraded cooling system.

All that at just 2,300 pounds. Of course, even the regular old Exige S is only around 150 pounds heavier, but that’s nearly 5% of the weight of the V6 Cup R. In automotive terms, that’s huge.

It seems Lotus hasn’t lost its way just yet and still remembers the things that made it great. The fact that it builds cars in Malaysia now can’t discount years of pointed purpose, although it will pack on the pounds. Thankfully it’s packing on the horsepower, too. Comfort hasn’t killed Lotus after all. Not yet, anyway.

Have you driven a 2013 Lotus Exige?
Rank This Car

CarGurus has 5 nationwide Exige listings and the tools to find you a great deal.