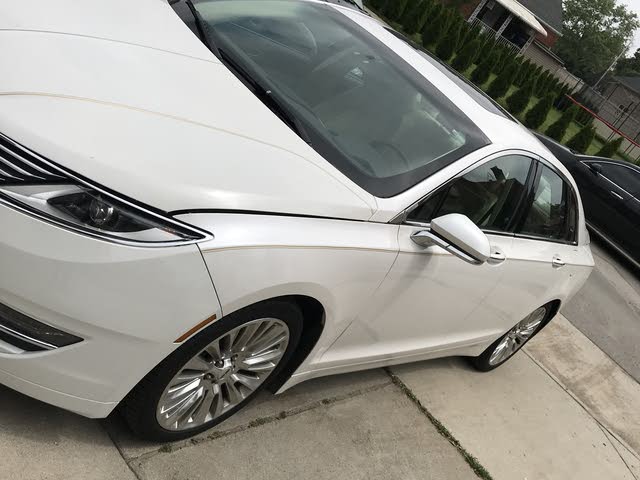 2013 just got off to a bold start with the unveiling of Lincoln’s refashioned MKZ. A vigorous redesign of its entire line begins with this luxury sedan, an entry-level model destined to appeal to the nouveau riche.

The concept model recently introduced at the Detroit Auto Show uses simple lines and an unfussy fascia. Its crescent silhouette is accented by the curve of the side windows, and the retractable panoramic roof seems to be almost entirely of glass, but will that be the case with the production model? The tasteful grille design angles gently upward, ending in headlamps shaped like wings. This is part of Lincoln’s strategy, says chief designer Max Wolff, of "moving away from complex designs and traditional luxury."

It’s all hush-hush right now, but the MKZ is expected to be available initially with a 2.0-liter 240-hp 4-cylinder turbocharged engine (same as in the Fusion) with a Hybrid model following suit. There are already complaints that the 4-cylinder, even with turbo, cannot compete with the V6 available for most other cars of its class, but the company says it will be specially configured. If there is a demand for a plug-in MKZ, Lincoln has also indicated it could be a possibility. However, no specifics for any engine have been released.

An 8-speed automatic transmission is anticipated, as well as a “retro-future” pushbutton transmission. No further details of the drivetrain have been released, although an AWD model is likely.

Inside continues this new ideal of restrained pampering with crème-colored stitched leather seats. The subtle texture overlay is supposed to emulate champagne bubbles, and, when one slips into the multi-contour seats, you may feel like you are bathing in a glass of the bubbly (but please don’t drink and drive). Natural copper in the paneling gives the interior a subtle greenish hue. The concept MKZ seats 4, but the production model promises to seat 5.

Two LCD panels are used—one for the gauges and one for the touchscreen, and a range of technologies are also anticipated, including Bluetooth link and MyLincoln interface.

The launch of the MKZ is part of the overall plan for Ford, as it attempts to revitalize the Lincoln brand. The company wants to focus more on cultivating boutique dealerships and services that will encourage people—especially young women—to visit a showroom. It begins by refreshing its core models and expanding outward.

If the MKZ concept is any indication, it looks like Ford is headed in the right direction.

darrell Would like to schedule a viewing and maybe a test drive of the vehicle do you guys finance....

Have you driven a 2013 Lincoln MKZ?
Rank This Car

Can I Look At The Listing For The Car I Purchased

223 views with 2 answers (last answer about a year ago)

How To Fix A Cylinder 1 Misfire?

Replaced spark plugs and coils on my 2013 Lincoln MKZ. Car still has a miss? Took to the dealership they mentioned low compression on cylinder 1 and that I needed a new engine. ($7700) Car had 169...

Is There A Fuse For My Tag Light