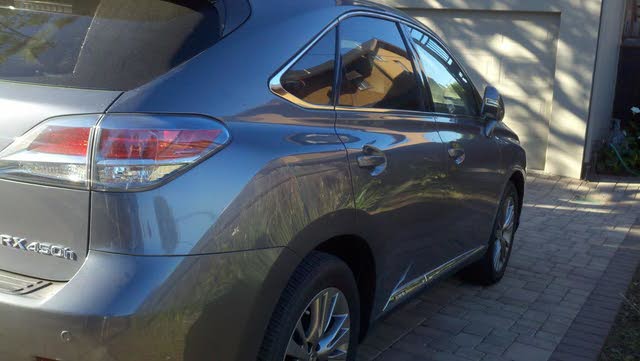 Lexus has made numerous changes to its entire RX line of crossover SUVs, which includes the RX 450h, for 2013. Among these are a minor facelift, additional headlight options, interior tweaks and a fourth driving mode, all of which should keep the already popular SUV finding its way into drivers' possession when it begins tolling off the assembly line later this fall.

The 2013 Lexus RX 450h is a hybrid that runs on either regular gas or electricity and is available with in either a front-wheel drive Base or an AWD trim. The powertrain is a 3.5-liter, 24-valve DOHC V6 engine with VVT-i paired with a 6-speed automatic transmission that achieves 245 hp and 234 lb-ft of torque. The gas engine is matched with two 650-volt electric motors (three in the AWD trim) that have a maximum output of 155 hp. The net output for the combined gas/electric package is 295 hp. The Base trim is estimated to attain 32 mpg city/28 highway, while the AWD is rated at 30/28.

New for 2013 is a fourth driving mode. Previous models could be driven in Normal, Eco or EV drive mode. New models also come with a Sport mode, which alters the electric power steering and throttle settings and makes a smoother transition when the traction and stability controls are engaged. And the interior instrument panel switches from a calming blue color to a fiery red. Other prominent changes include the front grille, which now comes with Lexus’ iconic spindle-shaped hourglass mesh, and daytime running lights which are shaped in the automaker’s signature “L.” Four new options have been added to the exterior color choices as well.

On the inside, the changes to the 2013 Lexus RX 450h are more modest. The steering wheel has been revamped so that it has a much more comfortable grip for the driver, while extra storage space has been added to the center console. Additionally, the rear hatch can now be operated electrically from the inside, and new wood and metallic accents have been added.

An additional trim, the F-Sport, made its debut at the 2012 Geneva Motor Show in March. Unfortunately, there are no plans by Lexus to make the F-Sport, which features a unique front bumper, upgraded headlights and 19-inch aluminum alloy wheels, available in the United States in the near future.

Have you driven a 2013 Lexus RX Hybrid?
Rank This Car

I recently bought a 2013 Lexus RX 450h AWD from The Car Store in Dumfrees, VA and would like to write a favorable review.

How can I edit my lsiting.