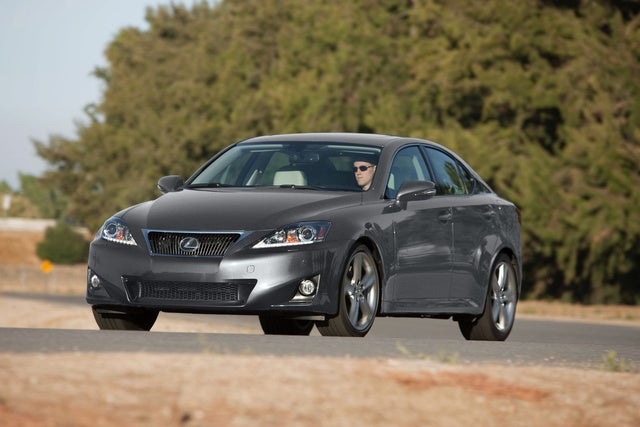 The year 2013 finds the Lexus IS 350 essentially unchanged for the eighth time, adding just HD radio with iTunes tagging and a smartphone suite to Lexus's optional Enform infotainment system. The lack of changes isn't turning anyone off, though. Indeed, the Lexus IS 350 is a tried-and-true small commuter sedan with quicker acceleration than its smaller-block 250 brother but very comparable fuel economy, and it's still winning hearts of former BMW drivers at a clip just as quick as its 5.6-second zip-to-60 time. Lexus didn't need to change anything, and so it didn't—but 2014 might be a totally different story.

Most makers refresh their lines every 3 years, but excepting the addition of a convertible in 2010, Lexus's IS line remained essentially unchanged since its debut 8 model years ago. That would make it overdue for 2 refreshes, and certainly due for one in 2014, but so far there's still very limited information about the next-generation IS. Spy shots indicate Lexus probably plans to merge the convertible and sedan into one versatile platform, which would likely make it heavier than before, at least, but beyond that Lexus is in true luxury-maker form and isn't spilling any beans.

That said, if you're just learning of Lexus's smooth luxury commuter and prefer the kick this 3.5-liter V6 offers at about 19 mpg city/27 highway, this just might be your last chance to get a fresh one. Nobody knows what will happen to the performance and engine choices in the next generation, but adding convertible body considerations to a sedan doesn't typically improve performance, and the 350 is thus far the only IS with any real punch in its pedal. The sports-car look is still basically just as skin deep as it is for its IS 250 and IS C brothers, but pumping out 306 hp and 277 lb-ft of torque through a paddle-shifting 6-speed automatic tends to satiate anyone's need for speed, even though it can't quite corner like a Ferrari or feel the road through the steering wheel like a BMW.

Instead the IS 350 is built specifically with a focus on commuter comfort. Offering 13 cubic feet in the trunk and limited rear legroom, it's not exactly a road-tripping touring car, but any sort of driving without the stop-and-go will make this engine's frugality shine through with sometimes better results than the advertised economy figures. Opting for all-wheel drive (AWD) over the default rear-wheel will net heated front seats and 1 less mpg at 18/26, but it cuts only a few tenths of a second from that competitive 5.6-second finish otherwise.

The lone trim is outfitted with features like xenon headlights, LED running lights, heated mirrors, a sunroof, keyless ignition/entry, dual-zone automatic climate control, 8-way powered front seats, leather upholstery, auto-dimming rear-view mirror and several high-tech considerations including Bluetooth connectivity with its fully-loaded 13-speaker sound system. Given all those features alongside a quiet, smooth ride with ample power, drivers just can't get over the IS 350's value without a complaint in sight.

Users ranked 2013 Lexus IS 350 against other cars which they drove/owned. Each ranking was based on 9 categories. Here is the summary of top rankings.