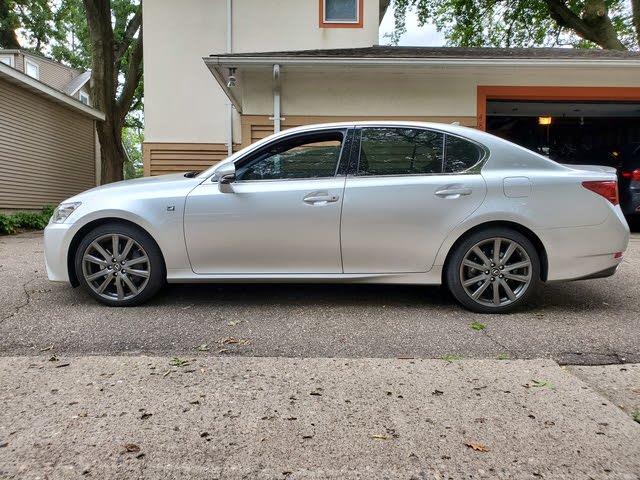 For its second generation as the 350, the 4th-generation Lexus GS sedan finally fills its midsize britches. An elegantly aggressive style now graces the wholly redesigned 2013 GS 350, and under the hood Lexus added greater efficiency, improved performance and vastly revamped the driving dynamics to match the new look and latest addition. A mid-cycle refresh isn't likely until 2016, but with an act like the 2013 to follow, Lexus might be hard-pressed to make its drivers' smiles any wider.

Speaking of wider, this year's edition is 1 inch wider and longer-legged than before, and about 300 pounds heavier. Lexus made sure to shave off as much weight as it could with the new materials, forgoing the previously standard first aid kit, heated seats and a lot of alloy trim in the process of making the 2013 GS 350 into a performance machine. Although those 3 extra points in the figures for this year's 3.5-liter V6 might go unnoticed given the same 5.7-second 0-60 mph time, it's still nice to know you have 306 ponies and 277 lb-ft of torque at your beck and call and the option of an F Sport trim for more aggressive thrills.

In spite of that added weight and amped engine, the 2013 GS 350 still manages to pull out a couple of extra miles per gallon over its predecessor with the same 6-speed auto-manual and nets 19 mpg city/28 highway in rear-wheel-drive (RWD) versions or 19/26 with all-wheel drive (AWD); this year's AWD economy matches that of the 2012 RWD version. Of course I haven't even mentioned the best part yet. With a tweak to the steering ratio here and a little torque on the suspension there, Lexus brings a few of the lessons learned in making its latest F Performance flagship—the 2012 LFA—within an affordable reach by endowing the 2013 GS 350 with German-like confidence and grace. She's stiffer than before, but that's the point, right?

The F Sport trim turns up the performance with several visual and mechanical enhancements, but leaving the engine and most everything else alone, focusing instead on driving dynamics. Its stance is 2 inches broader with an all-new multilink rear suspension, and the front suspension is likewise beefed up, every bit of it with aluminum to keep the weight down. Every performance rock was flipped over, from anti-roll bars to spings and brakes. Variable dampening locks the F Sport to the road for high-speed maneuvers, and the Sport+ mode also turns up the throttle response.

Most interesting of all the F Sport's new features is an oddly well-executed rear steering system. Under 50 mph the rear wheels turn opposite the fronts for tighter turns, and the rears turn slightly in the same direction as the fronts for better stability at high speeds. There's none of the wobble and oversteer so typical of these systems, but such a lightly-weighted steering doesn't seem right in such a beastly machine. Nevertheless, it works, and it works very well.

Hip- and headroom are up a couple of inches, but the trunk shrunk by a full cube for 14.3 cubic feet of maximum cargo space. Materials changed quite a bit as well, cutting back on the metallics in favor of more soft leather and glossy wood trims. Notable inclusions on the long-winded standard-equipment list are a power-closing trunk lid, 10-way power front seats with driver's memory, full Bluetooth connectivity, an 8-inch touchpad control interface, power rear sunshade, sunroof and a 12-speaker Surround-Sound system with CD player, satellite radio, HD radio and USB/iPod connectivity. The F Sport notably gets a massive 12-inch touchpad control display and 12-way seats, by default.

The Luxury option package now adds adaptive suspension dampers alongside all of last year's list, including features like bigger wheels, softer leather upholstery, heated and cooled powered 18-way front seats, and rear controls for the climate and audio systems. Opt for the Cold Weather package to get those heated rear seats plus a heated steering wheel, headlight washers and wiper de-icer.

Highlights of the a la carte selection of options include blind-spot detection, a head-up display, parking assist, lane-departure warning and keeping assist, dynamic rear steering, a night vision camera and basically anything your secret agent heart desires—except for a wristwatch transponder (that one is still all Aston Martin), but for a few hundred grand less, this Lexus comes daringly close.

Jwalk1911 great ride, it is an awesome car

Users ranked 2013 Lexus GS 350 against other cars which they drove/owned. Each ranking was based on 9 categories. Here is the summary of top rankings.

I Listed My Car On Cargurus. How To I Find Out Information On Inquiries.

I listed my car on CarGurus last week. How do I follow up and see if anyone is seeing my listing?

Driver's seat controls all work except for forward / backward motion. Motor appears to be working (can hear it trying to move seat). Anyone know if this is a mechanical or programming issue, or ...

This is a fully loaded Certified GS350 in excellent condition sold by a Lexus Dealer with an additional 40,000 mile or 3 year warranty.

When the low tire warning light comes on, is there a way, besides hand check pressure in each tire, to tell which tire is low? I'm migrating from a BMW which indicated which tire was low.