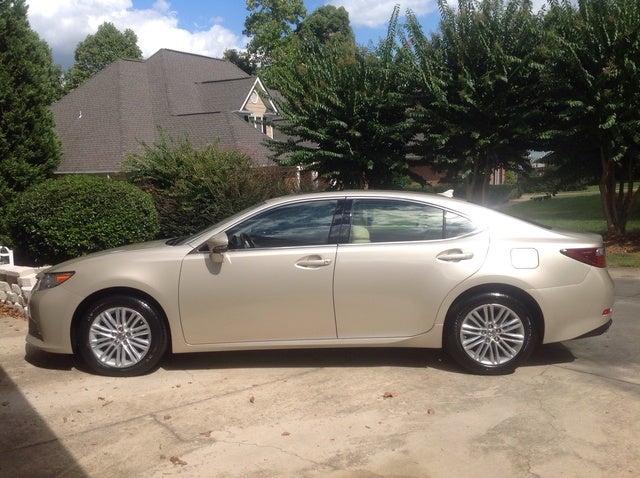 Average user score
4.8 ⁄ 5 stars
Based on 13 reviews
Nice Luxury Car For The Money by Jeffs2001 — After driving this car for the past month, I can now compare it to my older 2007 ES. The ride is a little more rougher than the 07, little more outside noise can be heard, I guess I'll just have to tu... Read more
Review by GuruGZYFY — My first thought was how clean, inside and out the car was. In my estimation, as I shopped for cars, it was a good value even though the mileage was high. It only had 1 owner, the Car Fax was cle... Read more
Very Nice Driving Car by Thuv47 — Like the styling, comfort and blind spot monitor. Don't like controls for audio, they are a distraction and are complicated. The apps work thru Lexus Entune but have been hard to get working consisten... Read more

Lexus’ engineers decided to retool the ES 350 for 2013, giving the midsize sedan more length, a wider wheelbase and minor cosmetic changes, marking the first revisions to the ES 350 since its debut in 2007.

The 2013 Lexus ES 350, which is available in a single, front-wheel-drive, gasoline-powered trim, continues to be powered by a 3.5-liter, 24-valve, DOHC V6 engine that makes 268 hp and 248 lb-ft of torque. The ES 350, which comes with a 6-speed automatic transmission, gives the driver the option of three driving modes—Normal, Sport or Eco—to choose from, which determines the amount of power supplied and controls the fuel efficiency of the sedan. Speaking of fuel economy, the ES 350 is rated to achieve 19 mpg city/27 highway.

In addition to widening and lengthening the 2013 ES 350, the designers at Lexus have also made some changes to the exterior, such as adding a trunk-lid spoiler and revising both the rear bumper (removing the existing dual exhaust covers) and the front grille. Interior upgrades include a new standard imitation leather for the seating surfaces and additional insulation for improved acoustics. The dimensional changes have resulted in additional legroom for rear-seat passengers.

The 2013 ES 350, which faces competition in the midsize sedan market from the Acura TL, Hyundai Azera and Mercedes-Benz E-Class, will debut on dealer showroom floors in late summer or early fall.

Users ranked 2013 Lexus ES 350 against other cars which they drove/owned. Each ranking was based on 9 categories. Here is the summary of top rankings.

The lights, dash and other electrical come on when I push the starter button, but the car won't start. It does make a clicking sound like it wants to turnover, but it doesn't. The GPS screen comes...

I have a lexus ES350. The Check engine light came on and the Diagnostic came back with error codeP0335. The cost for this repair (camshaft postion sensor remove and replace) was $1300.00. why would th...

How To Reset Tire Pressure Gauge

How to reset tire pressure lights.

Hello good guys, I have a 2013 ES350 with 78k and I just changed the transmission filter and oil. The transmission shifts smooth as before but at take of and every time it shifts it has a mild vibra...

Exiting Lexus ES350, locking doors via door panel which locks all doors. Then when I close the door from the outside the driver door unlocks again. I can only lock it and have it stay locked by us...