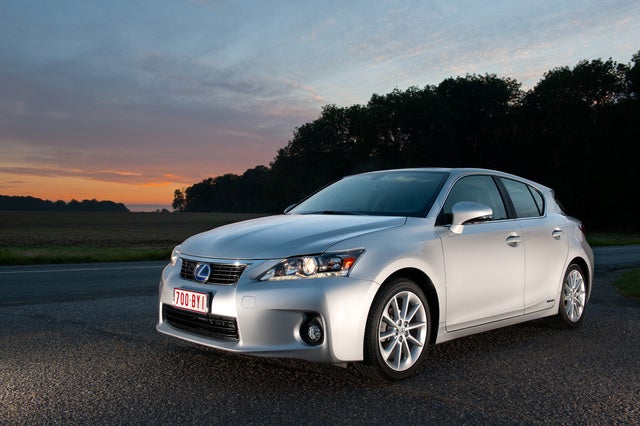 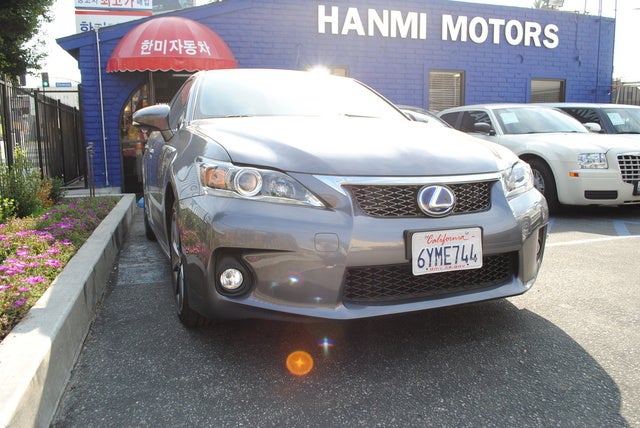 There was a time when Luxury, Sport and Economy were three different categories of cars. Today, we meld them together in order to come up with a whole that is actually less than the sum of its parts. The CT 200h offers you a compromise of traditional Lexus luxury, economy borrowed from the Prius and a sporty look that isn’t backed up in performance.

That’s right, the CT 200h utilizes the same familiar hybrid drivetrain as the Prius, packed into a shorter, lower container for some extra sportiness. That means a 1.8-liter engine with all the fancy tech Toyota provides, like variable valve timing and the 4 modular settings that take you from Eco to Sport. The engine is mated to a pair of permanent-magnet synchronous electric motors for a total of 134 hp. Here an all-electric mode is also available, which allows for travel at speeds up to 28 mpg for over a mile with the gasoline engine disengaged.

While EPA ratings are 43 mpg city/40 highway, that’s not enough to win recognition in anything other than the single-car category in which the CT 200h competes. More than that, the sportiness doesn’t deliver, either, as clicking the switch over to Sport means it’ll still take you nearly 10 seconds to hit 60 mph. That hasn’t been sporty in about half a century. Sport will also give full electric assist at partial throttle and tighten the steering as well as morphing the power-use gauge into a tach.

Yes, the CT 200h handles better than the Corolla/tC platform on which it’s based, helped by elements not found on either, like a lateral damper system and the aforementioned tightened steering ratio, but despite supportive seats, a low stance and a wide, thick steering wheel, the CT 200h never manages to feel truly sporty. The steering is still sloppy, the engine is still sluggish.

Yes, it’s true that it’s more fun to drive a slow car fast than a fast car slow, but that’s assuming either is fun to drive. New aerodynamic panels on a Prius don’t make it dynamic to drive.

That brings us to luxury. Many early adopters complained about a lack of luxury materials in the cabin. Fit and finish were fine, but oversights like a non-padded elbow rest on the door made for some serious sore spots. Lexus has fixed that, but the cheap materials still hang about, hidden and ready to jump out at you just as you start thinking to yourself, “Why did I spend so much money on this car?” At least some attempts have been made, and even ecology makes an appearance here, as the CT 200h boasts industry exclusive bamboo and resin speakers, plus some 30% plant-based plastic parts.

However, the CT 200h acts like the compact crossover it is in all situations. Things are tight inside, whether you’re a passenger or cargo, and never more so than for rear occupants. And don’t get your hopes up about rear visibility—it was an afterthought at best.

In all, the CT 200h attempts much but accomplishes little. It’s another victim of this mad dash for efficiency, or more specifically the mad dash to make money on the fashion thereof. Best to leave it alone before the industry leaves it behind.

Jwiseiam Have a Prius now that is 165k in. Need to trade it before battery dies. Need high mpg because I drive apx 30k per year but was looking for a little better image than Prius. I sell real estate and the Prius can be a turn off when trying to capture high end sellers. Any idea for a 40+ mpg w better image than Prius?

MPDano The Lexus is night and day compared to the Prius. Just think Lexus and how plush they are, all that and better looks and 43 mph.

Users ranked 2013 Lexus CT Hybrid against other cars which they drove/owned. Each ranking was based on 9 categories. Here is the summary of top rankings.

Have you driven a 2013 Lexus CT Hybrid?
Rank This Car

What Are The Advantages Of Buying A Used Lexus Ct With A Nav Screen Vs With...

Brought A Car As Is Not 30 Days In Richmond VA

i purchased a used car and spent 10k on a lemon. rva MOTORS DIDN'T TELL ME IT WAS A REBUILT TITLE AND LEFT MATERIAL INFO OUT THAT WOULD HAVE KEPT ME FROM Buying this vehicle the undercarriage of ca...