A fair number of standard and optional features, a surprisingly roomy cabin, the traditional strong warranty protection, decent mileage and a logical control layout all contribute to the 2013 Kia Rio5 hatchback’s voracious value.

Some downsides to the 2013 Rio5 include its cramped rear seating, less-than-peppy engine, plebian ride and handling attributes, and a distinct lack of overall refinement compared to its domestically produced rivals. 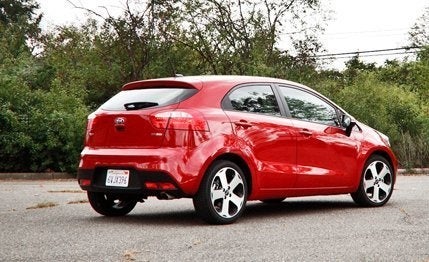 Need a value-laden small hatchback with decent if not overwhelming practicality? Check out Kia’s 2013 Rio5 lineup. With enough amenities to make the drive at least tolerable and some pretty good fuel-economy numbers, this Lilliputian hatchback strikes a good balance between posh and practicality for cheap money. And best of all, it’s way better than your father’s Rio5.

As a result of a radical reworking last year, the 2013 Kia Rio5 has become a bit of an anomaly. This 5-passenger, 5-door subcompact hatchback version of the Rio sedan is now respectable, without the common relabeling often employed to differentiate the old trash from the new treasure. It also remains economical and practical, along with toting one of the best warranties in the business. Meanwhile, this pint-size people-hauler flaunts a decent number of standard amenities, especially in the higher trims, and sports a stylish profile that belies its humble origins.

Three trims, the base LX, midlevel EX and flagship SX, reflect this little hatchback’s 4-door siblings, with the Rio5 offering the additional advantage of 49.8 cubic feet of cargo area when the rear seatbacks are folded down. Even the 15 cubic feet of cargo-toting space behind the second row ought to be more than enough for a week's worth of groceries or vacation luggage. Again, all trims pack the same 1.6-liter 4-cylinder powerplant, with a choice of either a 6-speed shiftable automatic transmission or a manual transmission. The stick-shift is again standard aboard the base LX trim and becomes optional for the other trims this year. Further tweaks for 2013 include an optional driver-selectable Active Eco System aboard the EX that boasts auto engine stop/start technology, shutting down the engine at a stop and restarting when the gas pedal is pressed, while the top-shelf SX is now available with standard steering-wheel-mounted paddle shifters in the automatic-equipped version.

Unfortunately, a number of aggravating reminders of the Rio’s bad old days remain, including a certain lack of performance and driving sophistication compared with its somewhat more refined (and more expensive) rivals. Ford’s nimble Fiesta and Chevy’s turbo-optional Sonic are seen by most reviewers as ever so much more fun to drive, while Honda’s versatile Fit far outclasses Kia’s subcompact hatchback in cargo and cabin room. Hyundai, Kia’s parent company, also offers a worthy competitor to the Rio5 with its well-wrought Accent lineup. 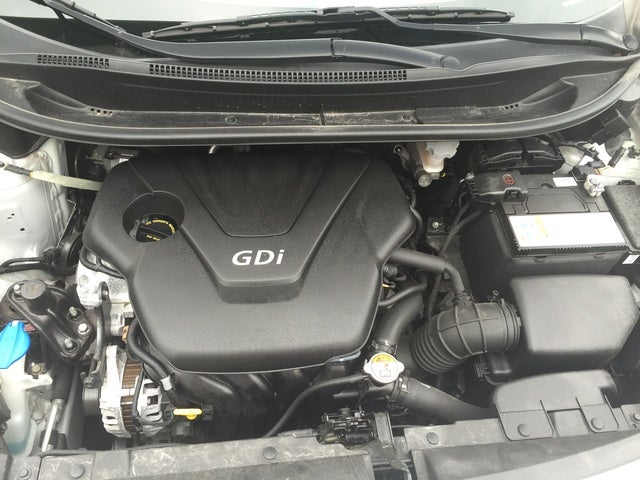 Again for 2013, only one engine, a variable-valve-timed (VVT) 1.6-liter inline 4-cylinder (I4) powerplant, is offered for the latest Rio5 iteration. Mated with either the 6-speed manual transmission that’s standard in the base LX or the 6-speed shiftable automatic that comes standard in the EX and SX, this quasi-peppy four-banger puts out 138 hp at 6,300 rpm and 123 lb-ft of torque at 4,850 rpm.

Mileage is estimated at a pretty decent 28 mpg city/38 highway for those trims equipped with the automatic transmission, while stick-shift-equipped versions are estimated at 29/37. The optional Eco Package with auto engine stop/start increases mileage to an estimated 30/36.

Tests of the 2013 Rio5 had it scooting from 0 to 60 in 9.7 seconds, which beats the class average by about a full second. Reviewers note the 6-speed shiftable automatic to be smooth and downshift friendly, even with the available Eco Package installed. The 6-speed manual, on the other hand, is described by most reviewers as a tad notchy, though according to more than a few, the clutch remains admirably supple, allowing an easier time of things in stop-and-go traffic. Finally, virtually all reviewers note that the I4 sounds a bit raucous on hard acceleration but tames itself nicely at highway speeds. 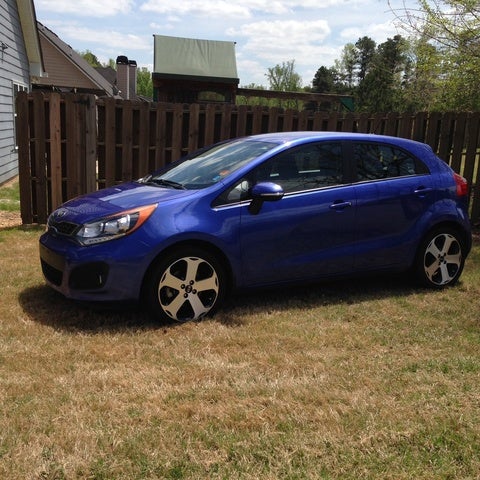 The 2013 Rio5 lineup again sports a front independent suspension with MacPherson front struts, a torsion bar rear suspension and stabilizer bars in front and rear. Both the LX and EX roll on 15-inch steel wheels, while the SX boasts 17-inch alloy wheels, and, of course, all trims mount all-season tires. The SX additionally gets some sporty tweaks to shocks and springs for an allegedly headier drive, though several reviewers find that it still lacks any sort of true excitement.

Reviewers do, however, praise the overall ride comfort of this little hatchback, claiming smaller bumps to be well-damped, though larger bumps will be felt, especially in the SX trim.

Handling, on the other hand, though adequate for commuting and mall hops, is not as satisfactory as reviewers might wish, even in the professedly sport-oriented SX. Nevertheless, most reviewers feel the Rio’s pint-sized hatchback demonstrates good highway manners and at least an adequate feel for the road. A number of reviewers, however, feel that it lacks much of the agility found in many of its rivals.

Finally, brakes are noted by reviewers to be well-modulated and confidence inspiring. Testing resulted in the Rio5 coming to a stop from 60 mph in an average of 119 feet, which, according to testers, is considerably better than average. 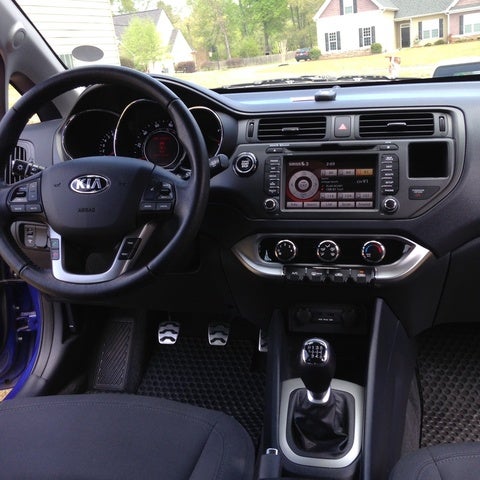 Standard equipment aboard the base 2013 Rio5 LX includes a rear spoiler, height-adjustable driver’s seat, cloth upholstery and heated power-adjustable mirrors. A trip computer also comes standard in this entry-level trim, as do tilt-wheel steering, steering-wheel-mounted audio controls and air conditioning. Entertainment, meanwhile, is furnished by an MP3-capable single-CD player with 4 speakers, satellite radio and a USB port, while everyone aboard can stay in touch with Bluetooth hands-free communications.

As is traditional, the base LX and notched-up EX trims get a few items that are standard aboard the higher trims as optional equipment, while all trims are eligible for extras like carpeted floor mats and cargo nets and mats. Meantime, a couple of packages are available to higher Rio5 trims, including the Active Eco System in the EX trim, and the EX Convenience Package, with 15-inch alloy wheels, UVO entertainment, a rear-view camera, a leather-wrapped steering wheel and soft-touch dashboard padding.

The top-shelf SX, finally, can be delivered with the available Premium Package, featuring heated front seats, leather upholstery, a power sunroof, push-button start and a navigation suite integrated into the rear-view camera display.

By and large, reviewers remain somewhat impressed with the roominess of this little hatchback’s cabin, while most laud the easy-to-use controls and large readable gauges. A few reviews do note that some controls are just a bit of a stretch for many drivers and that the rear seat is a tad cramped for long-haul comfort. Quietness, meantime, is a plus admired by most reviewers in the 2013 Rio5, though a few complain that seats could be a little better bolstered for cruising comfort. 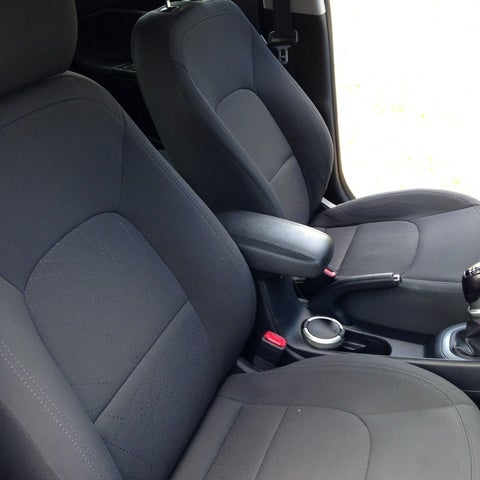 The Insurance Institute for Highway Safety, meanwhile, is not so generous with its findings, giving its worst score of Poor in side-impact testing, a second-best Acceptable score for roof strength and rear-impact protection, and a highest score of Good only in front impact protection. 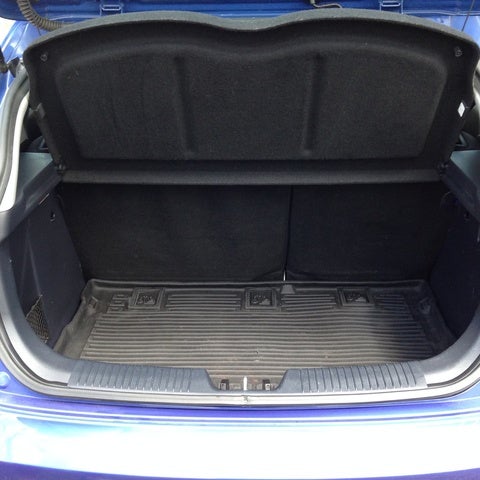 Owners' opinions are somewhat divided regarding their collective 2013 Rio5 experience, with about half fairly pleased with this downsized hatchback, and the other half not so impressed. Among the faults owners admit are a tendency in this smallish 5-door to be buffeted by brisk winds, while the stick-shift transmission occasionally shows a little of the balkiness noticed by a few reviewers. The backseat headrests have, according to a number of owners, a tendency to challenge visibility to the rear, while the standard audio system is lamented as far from offering quality sound. Finally, a number of owners complain that front headrests lean too far forward for comfort, while others gripe about fold-flat rear seats that don’t fold truly flat, as well as the lack of power-adjustable front seats.

Those owners who are well-satisfied with their Rio5 experience cite its heady styling and sturdy mileage numbers, not to mention the impressive warranty protection they get with this pint-size people-hauler. The economical Eco Package available to the Rio5 EX impresses more than a few owners, while others are surprised at the number of standard creature comforts packed into the higher trims. Finally, a number of owners confess their admiration for the well-wrought shiftable automatic transmission that’s optional in the LX and standard in the higher trims.

Hello all, I drove about 50 minutes, including some idling time. I stopped for about 30 minutes and when I got back into my car I smelled burning plastic. After I got gas, my car would not start. ...

My KIA Rio5 keeps giving me a check engine light. We ran a check and it didn't give us any codes... 1500km and 1 week under needed oil change and my oil is black and like sludge. My shop is wanting...