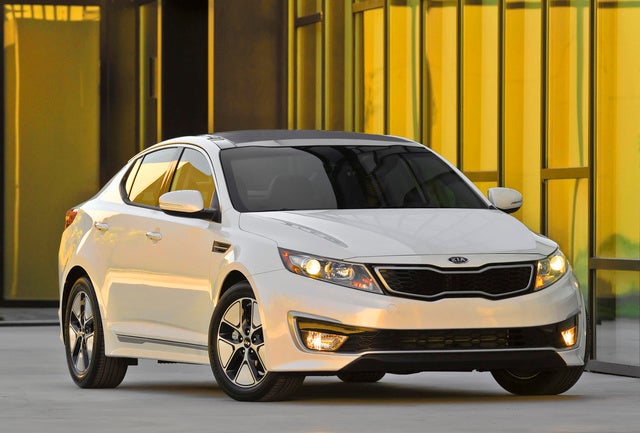 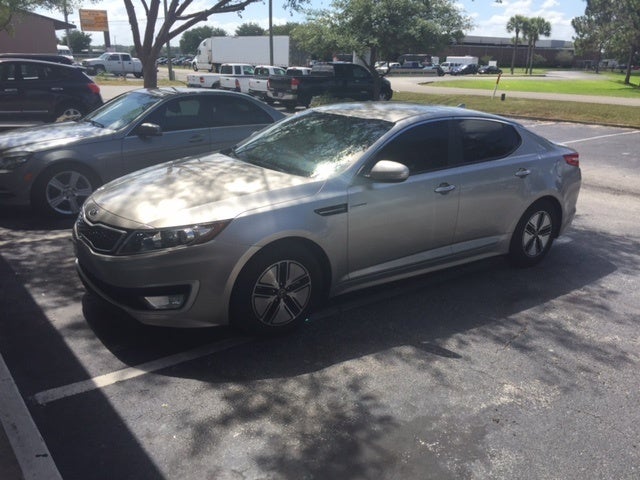 Easily the gem of the entire Optima lineup, the 2013 Kia Optima Hybrid carries over again unchanged from its 2011 debut. The rest of the Optima lineup sees minor changes this year, including the omission of a manual transmission option and the addition of an SX Limited trim, but the first expected tweak for Kia's first hybrid won't happen until 2014, and the extent of that isn't yet known, but is anticipated to be light. Few changes are great for the Hybrid and stand as testament to its perfection since debutâif all the driver praise it's received hadn't told you that already.

Most likely you can expect the 2014 Optima Hybrid drivetrain to follow in lockstep with the 2013 Hyundai Sonata Hybrid's improvements (on which the Optima is based) and a style refresh to follow suit with the rest of the Optima family, in all improving economy by 1-2 mpg, cargo capacity by a cubic foot or two as well as some seat comfort and materials reconsiderations for the 2014 Optima Hybrid.

Until then the Kia Optima Hybrid continues to flaunt stunning looks, amazing value, thrilling power and fantastic economy with an EPA estimate of 34 mpg city/39 highway and some reporting nearly 50 mpg. The only catches include notoriously hard seats, so-so steering response and just 9.9 cubic feet for cargo before opening up the rear-seat trunk pass-through for longer items. Some drivers don't like the turbo-reminiscent hesitation from its more economical driving modes, but admit 206 hp and 195 lb-ft of torque out of the Hybrid's 2.4-liter 4-cylinder paired with a 40-hp electric motor is nothing short of fun—so much so they even forget Kia may as well have put a wooden park bench beneath its default cloth upholstery.

Running on pure electric power at a complete stop or even light acceleration up to 62 mph, the Optima Hybrid announces itself to pedestrians with the usual electronic whine, but is otherwise remarkably quiet, especially where it counts, like inside the cabin at highway speeds. The Optima Hybrid's 6-speed automatic offers fantastic get-up-and-go for a hybrid, with arrival at 60 mph clocked as taking just over 9 seconds, and aside from that hesitation in "EVO" (electric-only) mode, the Hybrid otherwise handles things like the transition from electric to gas quite admirably.

What's your take on the 2013 Kia Optima Hybrid?

Users ranked 2013 Kia Optima Hybrid against other cars which they drove/owned. Each ranking was based on 9 categories. Here is the summary of top rankings.

Have you driven a 2013 Kia Optima Hybrid?
Rank This Car

Car Will Not Start. Any Ideas Will Be Appreciated. ?

Car will not start, charged the battery and still nothing. I have no interior lights, nothing. I mean nothing. Any ideas will be appreciated. ?

Replaced battery and worked fine for a week. Jumped started fine and drives fine but when I shut off it won't start back. Key fob inop and steering wheel light is all that is showing on dash

Why My Car Makes A Loud Air Shot When Accelerating From 1st To 2nd Gear?

Hi! I own a 2013 kia optima lx hybrid. For some reason my car makes a loud noise when going from 1st to 2nd gear like an air shot. Anyone knows what the problem is? Thanks!

How Do I Leave A Review Of A Dealer?

Your system will not allow me to leave a review. I’ve called the dealer, expressed my concern, heard nothing back and now I’ve waited over a day. Do you have any suggestions on how I can leave a ...

3 views with 3 answers (last answer about a year ago)

473 views with 2 answers (last answer about a year ago)