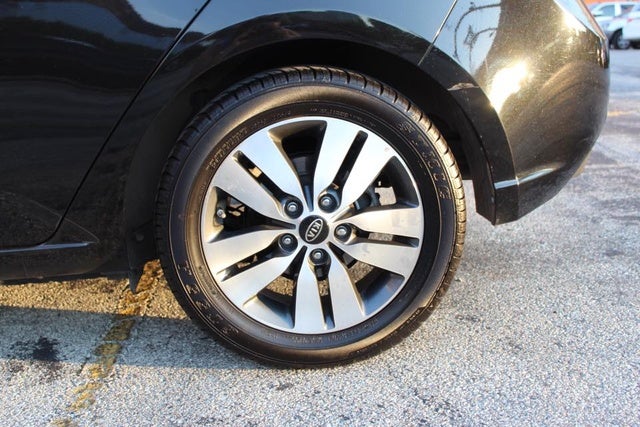 Kia's compact hatch dubbed the Forte 5-Door enters 2013 much like it debuted for 2012 as a new-to-the-U.S. edition, but that isn't likely to remain the case. Just about every Kia fan and non-fan alike is all abuzz about the upcoming redesign foreshadowed by the European release of the Kia Cee'd, but so far every driver waiting to get their hands on a redesigned Forte has met only disappointment. At earliest U.S. markets can hope for the redesigned Kia Forte 5-Door as a 2013-and-a-half debut, and even that isn't a sure thing.

The only sure things for the 2013 5-Door, at least this early edition, are the standard additions of power-folding outside mirrors, 16-inch alloy wheel choices and LED daytime running lights for the top-shelf SX—of which only the LED lights are not also standard, but optional, for the 5-Door base EX. Less notably, Kia also redesigned their badge, added in a standard washer fluid dummy light and changed the Spicy Red and Metal Bronze paint choices to a darker Crimson Red and Metallic Bronze.

Whether these changes will survive the redesign is anyone's guess, but Kia is known to keep the value train chugging year after year. Perhaps these changes are just a preview of what's to come, but it's probably just as likely these pricey specials are a last hurrah before lowering production costs (read: cutting corners) in the new debut. In any case, you can safely expect these nifty new features back by 2015, if you don't mind waiting. So if you like the features and present design, you probably have about 6 months to snag one new before everything changes.

The rumored redesign is a space-age leap in style some find too "glitz and glam" for their tastes, instead favoring the current Forte's more understated '90s appeal. With swooping lines and flared lights more reminiscent of the current Hyundai Elantra, with which the redesigned Forte may also share a suspension and engine platform, the rumored Forte takes on an aggressive streamlined look that hardly seems to suit its handling shortcomings in this early 2013 edition.

Of all the Forte options, the 5-Door hatch and 2-door Koup seem to be getting the most attention in the driving dynamics department for the revamp, so maybe, just maybe, that sluggish, bumpy, noisy, hard ride will be replaced with something more responsive and serene for at least the 5-Door and Koup at first. It would be a shame to say the sheet metal skin lies about the performance within, but without the rumored changes to the suspension and engine, the Forte would remain woefully outclassed in handling by such forefront competitors as Toyota and Honda especially.

However, pep, economy and utility are truly the Forte's, well, forté—especially in the 5-Door format. Power is no problem for both of the light 5-Door's 4-cylinder engine choices, ranging from 156 hp for the 2-liter in the EX and 173 hp for the 2.4-liter in the SX. The EX can fetch as good as 27 mpg city/37 highway with an economy option pack, the SX getting 23/32 regardless of whether the 6-speed manual or one of the 6-speed automatic transmissions is selected. The interior, though tight, boasts well-placed cubbies and compartments with easily read and used gauges.

Users ranked 2013 Kia Forte5 against other cars which they drove/owned. Each ranking was based on 9 categories. Here is the summary of top rankings.

How Much Oil Change Cost

114 views with no answers yet