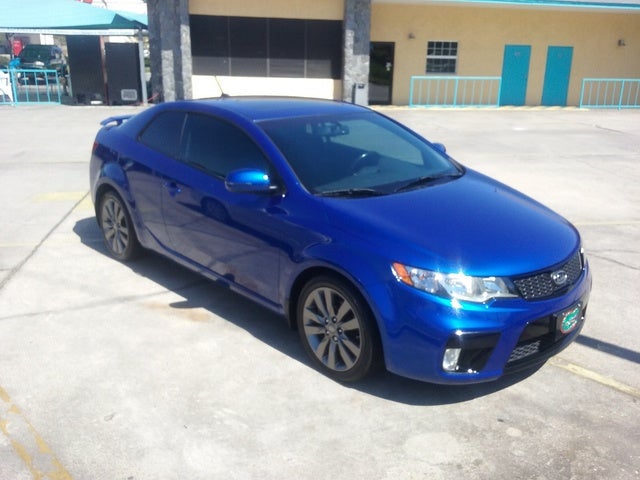 Kia's economically sporting 2-door Forte Koup compact carries into 2013 with few changes, but a redesign cresting the horizon. Truth be told, the rumored redesign is late, what with the Koup's presently disappointing ride and features list for a Kia in this range. Sure, its features beat out any other similarly priced competitor, but for Kia, only the 2013 Forte lineup seems to reasonably match up with the company's usually heightened ante.

The sporty top-shelf SX now fetches standard LED daytime running lights, also optional for the base EX, while both trims also get power folding outside mirrors, revised Kia badging throughout, a new 16-inch alloy wheel choice, washer-fluid dummy light and 2 new darker shades of red and bronze to replace last year's brighter hues of the same. While drivers will surely be pleased with these neat new gizmos, their reviews indicate a desire for better interiors, less road noise and a more serene ride overall—all issues rumor says Kia will address in the upcoming overhaul, though we can't be sure how well, given that our only previews are sketches and a Euro-spec release of just the hatch Forte 5-Door under a different name.

In terms of exterior style, the rumored redesign is truly a stellar beauty—or shall I say inter-stellar—with space-age-inspired swooping curves and flared lights made famous by the Hyundai Elantra. The good news is these rumored changes don't seem to be just skin deep with a supposed Elantra suspension and high-powered engine to breathe life into the Forte Koup's new outer shell, possibly as soon as a 2013-and-a-half debut.

While some drivers prefer the Forte Koup's understated style and find the glitz and glam of the incoming model distasteful, the new suspension and power bump could quickly turn those frowns upside down as they discover the Forte Koup they otherwise adore no longer drives like a plank of wood with beach ball tires. For now though, in this early 2013 edition, comfort, road noise and responsiveness stay just as disappointing, but it's not intolerable if you just want a decently safe and reliable new car with competitive fuel economy and useful pep.

Getting up and going is not a big problem for both of the light Koup's 4-cylinder engine choices, ranging from 156 hp for the 2-liter in the EX and 173 hp for the 2.4-liter in the SX. The EX can fetch as good as 27 mpg city/37 highway with an economy option pack over its usual 25/34, the SX getting 23/32 regardless of whether the 6-speed manual or one of the 6-speed automatic transmissions is selected. The Koup is the quickest of the Forte bunch, hitting 60 mph from a standstill in 7.4 seconds. The interior, though tight, boasts well-placed cubbies and compartments with easily read and used gauges.

Users ranked 2013 Kia Forte Koup against other cars which they drove/owned. Each ranking was based on 9 categories. Here is the summary of top rankings.

Have you driven a 2013 Kia Forte Koup?
Rank This Car

Wrong Car And Details On My Listing ?

Hello, Reaching out again as now the correct pictures are attached to my car but someone else's info....the car details are not what a wrote and do not match my car. Hoping you can help

This is the second time I've had this issue with my 2013 Kia Forte Koup SX. I have a remote start button on my key fob, and both times I tried pushing it to start and the lights, radio, etc. came on...

How Do I Fix The Front Defrost Knob On This Vehicle

I turn the knob on for the front defrost to come on and nothing happens no heat will come from the dashboard vent for defrosting the front windshield, but when it saying its on defrost. It blows hea...