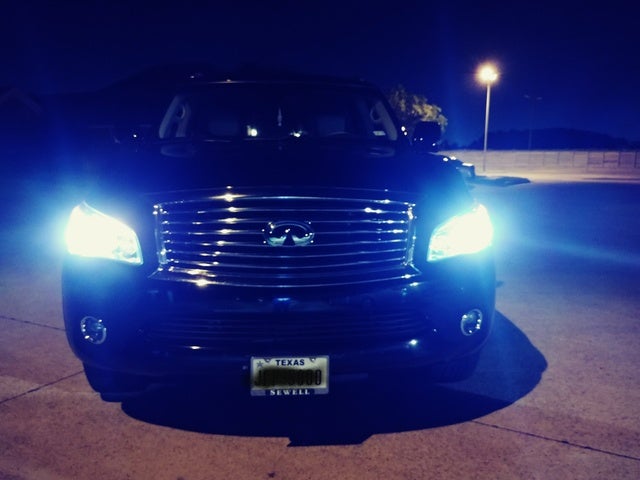 Coming off a redesign only 2 years ago, the 2013 Infiniti QX56 remains virtually the same vehicle that was sold at dealerships last year. The only changes for the new model year include the addition of auto-dimming exterior mirrors and the around-view monitoring system—with a front and rear sonar system—as standard features.

Two trims are available for buyers of the 4-door, 8-passenger 2013 Infiniti QX56: a rear-wheel-drive base trim and a 4-wheel-drive trim. Each comes equipped with a 5.6-liter 32-valve DOHC direct-injected gasoline V8 aluminum block engine and a 7-speed automatic transmission with adaptive shift control, manual shift mode and snow and tow modes. The engine reaches 400 hp and 413 lb-ft of torque, and the QX56 is capable of towing up to 8,500 pounds. The EPA estimates the QX56 can achieve 14 mpg city/20 highway.

Current owners of the 2013 Infiniti QX56 note the vehicle handles remarkably well for a full-size SUV. Its responsive V8 engine, owners write, delivers more than enough power to the wheels when asked and does especially well when hauling and towing. The ride is deemed extremely comfortable, and the QX56 handles corners remarkably well, too.

There are a lot of big-name vehicle manufacturers competing in the large luxury SUV market where the 2013 Infiniti QX56 finds itself, including the Cadillac Escalade, Land Rover Range Rover, Mercedes-Benz GL-Class and Toyota Land Cruiser. The QX56 finds itself just a notch below the bigger names when it comes to luxurious appointments, but makes up for it with rigid construction, making it one of the best choices in the class for going off-road. A little less pricey than its German and American counterparts, the QX56 is a solid contender in the large luxury SUV market.

Gary I Look forward to; be a QX56 4 Wheel-drive Owner within 2 year's.... I'm Very Impressed w/ the Leg/ head room& On Board Factory feature's it has on the AWD model. It would be, a Wise choice when Traveling to FL. On some Occasions& I need a SUV w/ Total Worry- free Hassel like the INFINITI Provides.. I'm sure the 2013 QX56 will look AWESOME next to my 13' G37 Sedan. They are very Impressive Reliable Vehicles Local/ Travel Wise... Gary S.