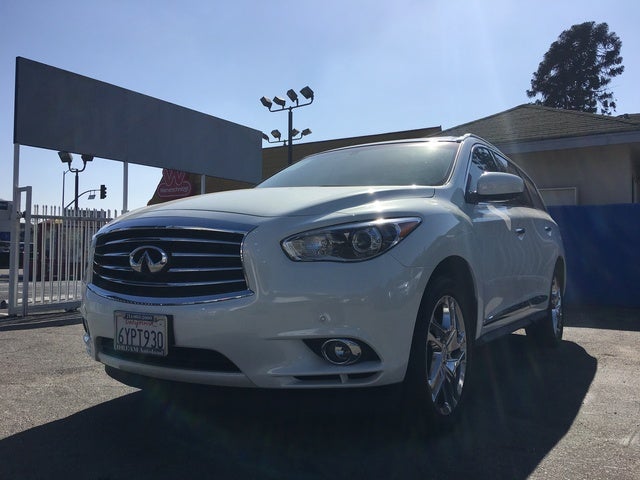 Looking for a Used JX35 in your area?

Making its debut for 2013 will be the JX35 from Infiniti, a 7-passenger luxury crossover SUV. The JX35 claims to offer true 3-row utility and numerous Infiniti premium features. Offered in a single Base trim that can be configured with front-wheel drive or equipped with Infiniti’s intelligent all-wheel drive (AWD), the 2013 Infiniti JX35 runs on regular gas and comes with a standard 265-hp, 3.5-liter 32-valve DOHC V6 engine mated to a sport-tuned continuously variable transmission (CVT) that attains 248 lb-ft of torque. According to the EPA, the JX35 achieves 18 mpg city/23 highway. For those who are interested, the JX35 has a towing capacity of 3,500 pounds when properly equipped.

The 2013 Infiniti JX35 enters an already crowded luxury crossover market, going up against the likes of the Acura MDX, Audi Q7 and Volvo XC90. With a price point that is comparable, it’s going to be the appointments and functionality of the JX35 that will set it apart from its competitors. With Infiniti’s reputation, the JX35 should be able to hold up well for years to come.

TheHorror Since when did Infiniti have a reputation for prestige or reliability? Infiniti sells fewer cars each year than nearly every other premium brand, and it's cars depreciate terrifyingly quickly.

Users ranked 2013 INFINITI JX35 against other cars which they drove/owned. Each ranking was based on 9 categories. Here is the summary of top rankings.

Looking for a Used JX35 in your area?

All of my windows just stopped working. They have gone down but will not go back up. Now they won't move at all.

I have a 2013 infinity jx-35. It has a front end clunk noise when going over bumps. It sounds like it’s on the drivers side. Checked the front end and everything is tight. Can’t get it to make th...

Problem With Radios In Climate Control

Problem with radio and climate control. The buttons on the center consul we’re not working.

I Am In The Market For A Newer Midsize SUV What Is A Good Buy. I'm Conside...