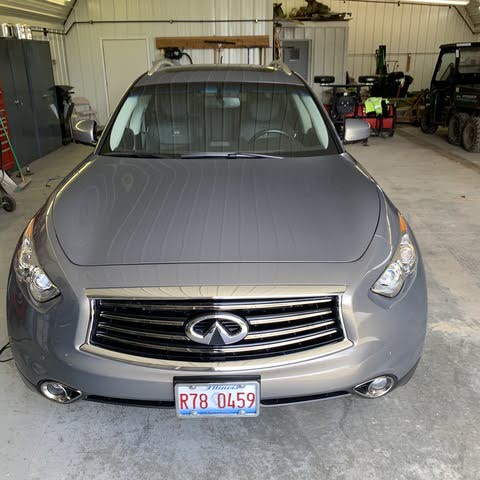 Due for a 2014 refresh, the brawny Infiniti FX50 midsize sport crossover carries over into 2013 with a few changes, and these few changes are perhaps an unsettling sign of things to come if you prefer its more touring incarnation. Although Infiniti's press releases allude to nominal additions and some other shuffling of features and options, early die-hard FX50 shoppers are a bit taken aback by the recent combining of the Sport and Technology Packages, such that you cannot get certain technology unless you also want the truly sporting super-firm ride.

Infiniti isn't being especially forthright and clear about the option packages for 2013, nor is there any hint aside from these changes as to what we can expect for 2014—but given all that we do know, it wouldn't be surprising if the FX50 morphs into an even more sport-focused crossover for the refresh. It has an exceptionally limited Sebastian Vettel Edition—named for the famed race driver—going for a cool hundred grand in Europe with a top speed nearing 200 mph. Those clues combined with the smelting of Sport and Technology option packs says to this reviewer Infiniti is about to take the FX50 into a full-sport plunge, no longer content to ride the fence, even though it does the finer lines as if those were its specialty.

The move to pure sport is understandable if you've ever witnessed an Infiniti SUV ripping down tightly curved highway onramps at 60 mph. Its specialized double-wishbone independent suspension does so well keeping lateral Gs at bay that it could be considered another world wonder—as if the FX50's zip-to-60 time of 5.5 seconds isn't wondrous enough for a crossover. To be sure, the FX50 has always been more about sporting performance than utility, especially given its 25 cubic feet of cargo space with the seats up, and a maximum of 62 cubes if you don't have an in-law you want to annoy by squeezing him or her into the relatively short-legged rear seating.

Another point in the FX50's performance-over-utility mantra is evident in its fuel economy. Sure, you expect low figures given the level of performance offered by the 390-hp and 369-lb-ft of torque V8 mated to a 7-speed auto-manual calling the shots with all-wheel drive (AWD), but 14 mpg city/20 highway is more of what you would expect from an off-road capable truck, not a road-trained crossover. This exact same 5-liter V8 nears 30 highway mpg and tops 400 horses in other cars—it's not the engine, but the sheer weight of the FX50 that sucks out the economy.

Of course that weight isn't much of a surprise if you look at the included technology before adding any options. Between the 360-degree-view top-down camera, moving object detection, powered everything—power liftgate, power heated and cooled front seats with driver's seat memory, powered auto-dimming side-view mirrors, auto-dimming rear-view, garage opener and remote keyless entry—on top of latent safety features like lane-departure warning, the FX50 is absolutely loaded to the tune of 4,556 pounds before anyone or anything else is inside. As such, towing capacity is rated at 3,500 pounds even though that limitation probably has nothing to do with the engine and everything to do with maximum road load. If touring comfort and all-around utility sit lower on your list than tech and fun, the FX50 is definitely worth a look.

LRGORDONS what is built and designed to do ?? take kids and groceries on errands in style to impress the neighbors ? Haul the boat to the marina and back filled with gear ? take the dogs and friends out the back roads on a fall hunting or hiking trip ( meaning real back roads as in off roads) ?? or is it just a heavy funky looking sedan trying to stand out in order to justify the price tag ???

Users ranked 2013 INFINITI FX50 against other cars which they drove/owned. Each ranking was based on 9 categories. Here is the summary of top rankings.