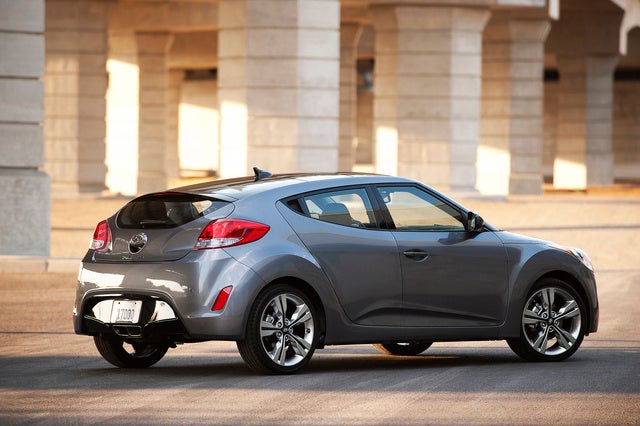 Looking for a Used Veloster in your area?

A critical darling and crowd-wower since its introduction last year, the quirky Veloster coupe with the extra door held a lot of promise. Most reviewers were impressed with the styling and price point, but felt it lacked distinction under the hood. This year, Hyundai attempts to silence the critics by adding a much-anticipated turbo engine.

Two levels of trim are available. The base Veloster will give you last year’s 4-cylinder engine, making 138 hp and 123 lb-ft of torque. But an added turbocharger jacks it to 201 hp and 195 lb-ft for Turbo versions. Both have front-wheel drive and a 6-speed manual transmission standard. The standard Veloster offers an optional 6-speed dual-clutch transmission, and the Turbo a 6-speed automatic; paddle-shifters are available for both. Seventeen-inch alloy wheels are standard on the base, with an option for 18. The Turbo rides atop 18-inch alloys with chrome accents.

Reviews for the Turbo thus far, however, have been disappointing. Many feel on paper its specs are decent, but on the road it doesn’t deliver. Some suspect since the suspension and handling haven’t been adjusted for the turbocharged engine, it doesn’t have the performance it should. On the positive side, it still delivers stellar gas mileage for a turbo—it’s estimated at 26 mpg city/38 hwy (28/40 for the regular Veloster).

On the outside the Veloster is still a head-turner and essentially unchanged from 2012 for the base. The Turbo is a little more aggressive and flashy, with fog lights, projector-beam headlights and dual exhaust manifold. A new matte-grey finish is available for Turbo owners that want even more pizzazz, but this finish requires extra care (hand washing only) that should be taken into consideration. A panoramic sunroof is optional.

Hyundai keeps the feature-rich interior, including the cockpit-like driver’s seat, the same. Bluetooth, a touchscreen and push-button ignition are standard. And, of course, so is the Veloster's unique combination of hatchback, coupe and sedan. Between the hidden right passenger door and the hatch, there is room for both storage and students. Six airbags are standard as well as electronic brake assist, and stability and traction control help keep you safe on the road.

And the Veloster is unquestionably a hit anywhere you go. With its cartoon-like colors and unusual silhouette, be prepared to talk to strangers at filling stations and stoplights. It may not deliver the performance promised, but in terms of owner pride and satisfaction, it rates very highly.

What's your take on the 2013 Hyundai Veloster?

Meghan oh yes! I get a lot of stares going down the road and it's funny as soon as I purchased mine, EVERYONE started getting one. It makes up great for gas and speeding when I need, but there is a bit of a putter when I start up and go. (it will need a minute to warm up). The suspension is on the delicate side being that it is a sports car and a bit low to the ground, so potholes must be avoided! Rolling over speed bumps can also be a like playing a game of Jenga; pull thru slowly without dropping the block! I been debating if I should trade my car in but I absolutely love the looks and have gotten used to the easy display from the inside!

Users ranked 2013 Hyundai Veloster against other cars which they drove/owned. Each ranking was based on 9 categories. Here is the summary of top rankings.

Have you driven a 2013 Hyundai Veloster?
Rank This Car

Looking for a Used Veloster in your area?

Why Does My Post Say Frame Damage When Carfax Says Structural Alteration?

How Do I Restart My Car.

How do I start my car ,it was stolen,had to brake in car it doesn't start with key how do I reset it.to start. It's a 2013 Valoster no torbo

We Have A 2013 Hyundai Veloster. What Is The Best Oil Interval Change Time?...

I Have No Sound Coming Out Of My Bluetooth System

when I first take off after starting my car it wants to kinda jump. But after its warmed up its fine.