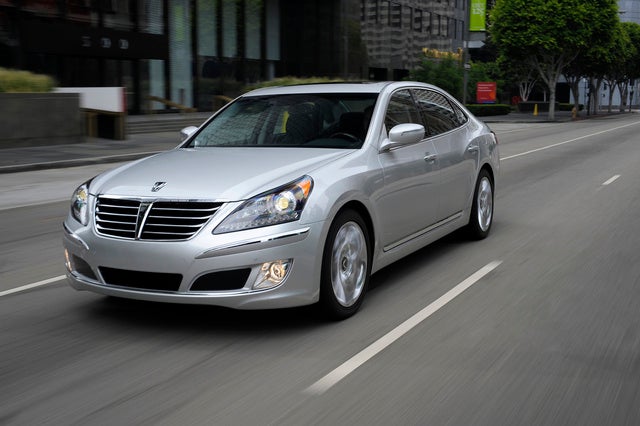 The Hyundai Equus full-size 4-door luxury sedan toddles into its third year unchanged from the 2012, and but for one small exception, owners are quite pleased. Not as buttoned-down as a Bentley, nor as stiffly sporting as a BMW, the Equus nevertheless boasts ample engine power and remarkable comfort in such a way that begs the question: That's a Hyundai?

At a price point thousands lower than the entry fee for the recognized leaders in luxury, Hyundai extends the very same elite service to its Equus shoppers and buyers as those leaders of luxury with an equally compelling product. Although the maker no longer gives every Equus buyer an iPad pre-loaded with its owner's manual app, shoppers can simply call their local Hyundai dealer to bring the test-drive to them. Should they decide to purchase the Equus, all services and maintenance are handled in precisely the same manner.

Sure, it's not really a fashion-forward head-turner, but being so early in the game, would you really want to glaringly announce you've defected from pompous overpricing? Rather than standing out, the Equus takes the road less embellished for its outer shell, preferring subtle streamlining, 19-inch chrome alloy wheels and tastefully limited chrome accents over flair and extravagance. It's the sort of simplicity that makes you feel safe parking it downtown and yet proud of its deserved self-esteem to show up in public without makeup.

The base Signature affords comfortable seating for 5 with virtually zero driver complaints. The only sticking point is in the super luxurious Ultimate 4-seater, where reclining rear seats leave little footroom with the automatic ottoman in use. Oh, what a first-world hell! The only other complaints stem from drivers expecting a loftily tuned suspension to behave otherwise. Like most large luxury sedans, the Equus is rear-wheel drive, but also like most large luxury sedans, don't expect the Equus to be track-worthy, and due to its soft-sprung nature, do expect harsh cross-winds to affect its handling somewhat.

According to drivers, despite the fuel economy loss, Hyundai made a wise decision sharing its Genesis R-Spec direct-injected V8 engine with the Equus. Thanks to the also-new-for-2012 8-speed Shiftronic automatic transmission with a sport shift mode, all 429 hp and 376 lb-ft of torque out of this 5-liter behemoth seamlessly coordinate for a 6-second interval between standstill and 60 mph. Sure, it's not exactly rip-roaringly quick, being a full 2 seconds slower than cars costing $200,000 more, but drivers agree the price-per-pound-foot couldn't be more practical, and fetching 15 mpg city/23 highway on premium fuel isn't too shabby either.

All of that said, sitting inside the 2013 Equus is where you forget it costs only half a hundred grand. Finely stitched soft leathers adorn nearly every surface—a few more in the Ultimate—with warm wood veneers otherwise surrounding user-friendly controls and high-end gadgetry. The Equus feature list is exceptionally long and in some cases beats other luxury makers' offerings, but just to give you a taste, the right-rear passenger seat offers a massage function. Don't pinch yourself too hard!

lincolnadmirer I have to admit, I was among the skeptics when I was shopping for a car to replace my Lincoln. A Hyundai? Come on...But all one has to do is test drive it. The luxury amenities are all there and then some. It's roomy and comfortable, good looking, and fast. You feel very safe in the car. Everyone not familiar enough with this segment of the market, thinks I have a Mercedes. LoL. Love it when they learn that it's a $70 grand offering from South Korea. The folks over in Seoul have a winner here. It's thousands less than the competition from Germany, and Japan. I'm always recommending the Eqqus and their current offering, the Genesis G90.

Users ranked 2013 Hyundai Equus against other cars which they drove/owned. Each ranking was based on 9 categories. Here is the summary of top rankings.

Have you driven a 2013 Hyundai Equus?
Rank This Car

Why Does My 2013 Hyundai Equus 5.0 Have Two Different Size Air Filters Unde...

Which Is The Better Luxury Car With Most Safety Features..the Hyundai Equus...

Best and most safety features with most luxury feature.