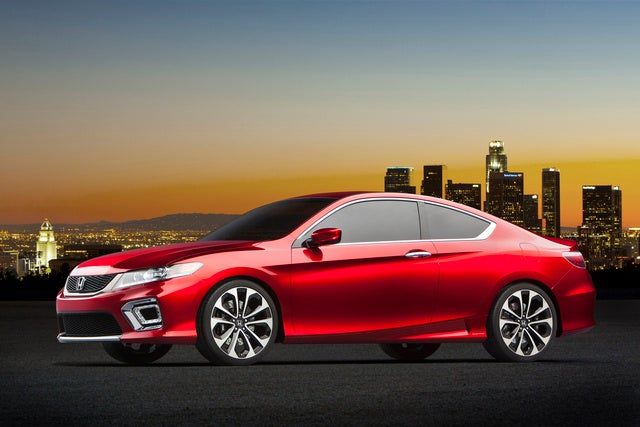 CarGurus has 1,577 nationwide Accord Coupe listings starting at $2,100.

For the 2013 debut of its 9th generation, the Honda Accord Coupe takes a much bigger risk on style than the sedan, but it doesn't get the hybrid option. Of course that's no big matter, since both all-new engines are revised for best-in-class fuel economy, according to Honda, and with the option of a 6-speed manual for either one, an engaging ride is almost guaranteed. However, looks and performance are just the tip of the iceberg for this highly promising redux of an American staple.

While the sedan only hints at its growing muscle with a few streaming lines and well-placed swoops, the coupe takes its 9th-generation style to the nines with rally-inspired skirts, chrome-accented vents and a gracefully toned look you were more likely to see in a dancer's legs than a car—until now. Head- and taillights are thinned and elongated, adding to the aggressive first impression and reminiscence of top-shelf sports cars, and a dainty tailfin tops it off without getting in the rear-view.

No word on what we might find on the inside except for a few new gadgets. Newly standard features across the board include Bluetooth, text-to-voice, LCD display and streaming connectivity with Pandora and Apple's iPhone. As for safety, there's no sure word whether the new forward-crash and lane-departure warning systems will be included in every Accord coupe, but the new blind-spot monitoring systems and multi-angle rear-view camera are definitely just options.

Although performance will remain relatively unchanged—gaining just 5 or 10 points on horsepower and torque—the new engines are supposed to top the fuel-efficiency charts when coupled with the continuously variable transmission for the smaller 2.4-liter 4-cylinder, or the 6-speed automatic for the bigger 3.5-liter V6. Supposedly both get the option of a 6-speed manual in the Accord Coupe, but not the sedan, while a new Eco driving mode enters every Accord for 2013.

Honda also hinted at some improvements to driving dynamics, but didn't single out the Coupe or provide any specifics. The sedan is smaller and lighter than previous years, so Honda may have been speaking only of the sedan's expected performance improvements from its smaller size, and without any deeper detail from the maker it's tough to guess whether these improvements carry over to the Coupe.

Honda likewise neglects to mention what will change about the interior materials, and given the recent step back in the Civic, the omission leaves a lot of unanswered questions. Drivers of the previous generation have a lot of unanswered questions, too, like what's up with all these silly issues after 5,000 miles? Hopefully Honda has fixed the trunk seal and tire shimmy with this latest iteration, but as always, the proof is in the pudding.

What's your take on the 2013 Honda Accord Coupe?

Maravich Traded in a very well accomplished 2008 Honda Accord v6 coupe with Navi and 6 speed manual for the identical model in the 2013 version with an automatic transmission. Both in San Marino Red. I have a clear vantage point in comparing the 8th generation with the new 9th generation Accord. What a fantastic job Honda has done with the new Accord. I don't regret not shifting gears because the automatic fits like a pair of Gucci gloves in this car. Foolish nonsense to compare it with anything else on the road because the only competition is itself. It is truly an athletic, polished and refined automobile. Spend some serious time driving the v6 coupe in either itineration and you will agree with me.

Users ranked 2013 Honda Accord Coupe against other cars which they drove/owned. Each ranking was based on 9 categories. Here is the summary of top rankings.

Have you driven a 2013 Honda Accord Coupe?
Rank This Car

Cars compared to 2013 Honda Accord Coupe

CarGurus has 1,577 nationwide Accord Coupe listings starting at $2,100.

Passenger Side Window And Door Lock Switch Not Working

CAN WE PULL UP A CAR SOLD I MONTH AGO?

can we find the price the car was listed for?

Own a 2013 Honda Accord Coupe EX-L with LDW and front crash assist. During the purchase of the vehicle, I noticed it does not have an auto-dimming mirror. I want to swap out the current mirror for o...

2013 Honda Accord Coupe Trims For Sale