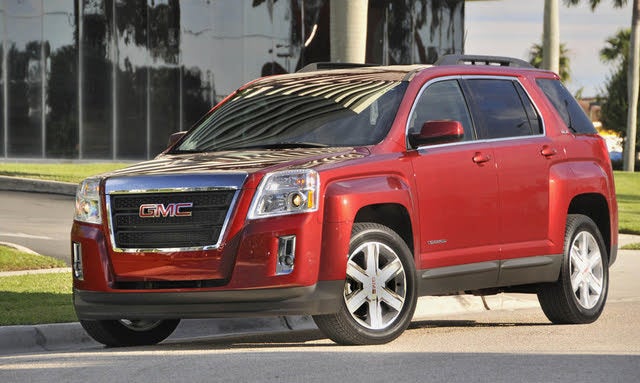 Although still somewhat new, the GMC Terrain will be arriving at the fall 2012 party with newer clothes and bigger muscles for 2013. The 2013 GMC Terrain will now be available with an optional 301-hp V6 engine in addition to the standard 2.4-liter 4-cylinder and a more upscale look for the exterior. Since arriving to replace the Torrent in 2010, the GMC Terrain has remained mostly unchanged, and it gets only minor changes for 2013. The 2013 GMC Terrain appeals to those looking for a fuel-efficient small crossover SUV that is stylish but still functional.

The 2013 GMC Terrain base SLE trim will keep its current 4-cylinder engine. That 182-hp, 2.4-liter 4-cylinder will continue to provide exceptional fuel economy with an EPA estimated 22 mpg city/32 highway. It will still be available with E85 Flex-Fuel capability as well. Available towing capacity for the 4-cylinder is approximately 1,500 pounds. The GMC Terrain SLT will be available with the 2.4-liter 4-cylinder or the newly available direct-injected 3.6-liter V6 that replaces a smaller V6 offered in 2012. The new muscular V6 will provide 301 hp with 272 lb-ft of torque to the SLT. Even though the Terrain has more power, GMC assures it will maintain similar fuel economy to the smaller V6's in the front-wheel-drive 2012 Terrain at 17 mpg city/24 highway. The towing capacity of the V6 is approximately 3,500 pounds, which is very substantial for the size of this vehicle. The Terrain will feature a standard 6-speed automatic transmission. The base Terrain SLE will be available only in front-wheel-drive, while the Terrain SLT comes in a front-wheel-drive or all-wheel-drive version.

The interior of the 2013 GMC Terrain base trim will remain largely the same, including its 7-inch touchscreen interface and rear-view camera display. The interior space will remain comfortable and roomy, still able to handle both people and cargo at the same time. With rear seats that are able to slide and recline to provide additional room for either passengers or cargo, you can easily adjust the amount of space needed. Folding down the rear seats will provide you with approximately 63.7 cubic feet of space for any cargo you might need to take with you. The only small problem with the modern-looking dash that remains is buttons that are very close together, making them somewhat difficult to distinguish at a quick look. Additional standard features will include a power liftgate, power front seats, Smartphone integration and a lane-change warning and forward collision alert system.

The suspension and handling options for the 2013 GMC Terrain will remain the same as for prior years. It will feature a MacPherson strut front suspension, multi-link rear suspension. All this combines with front and rear stabilizer bars to provide a smooth, comfortable ride. The GMC Terrain has historically had the handling feel of a larger SUV, but does not seem to have quite the agility it should have for a small crossover SUV. All the suspension components do, however, provide a comfortable highway ride for both driver and passengers for long or short road trips.

The 2013 GMC Terrain will be equipped with standard antilock brakes as well as both stability and traction controls to provide safe braking even in quick response situations. The vehicles are also equipped with side curtain, front-seat and side-impact airbags to assure the safety of the driver and all passengers in any type of collision. All vehicles are equipped with a rear-view camera as well as OnStar capability. The Terrain will also feature additional standard electronic safety features such as a forward collision and lane-change warning system. Previous models have attained the best possible rating of Good by the IIHS (Insurance Institute for Highway Safety) in frontal-offset, roof and side strength tests.

Users ranked 2013 GMC Terrain against other cars which they drove/owned. Each ranking was based on 9 categories. Here is the summary of top rankings.

Have you driven a 2013 GMC Terrain?
Rank This Car

I Cant Get My Key Out Of The Ignition

All Wheel System Off

I change the rear rotors and brakes on my vehicle got everything back together start the vehicle and the all wheel drive system off message come up also the abs light is on And the service stabilit...

Does Car Gurus Offer Shipping To 30677 From Florida

The Ac Trys To Come On But Doesnt

ac doesnt wrk tried to put freon in did not help

74 views with 2 answers (last answer about a year ago)