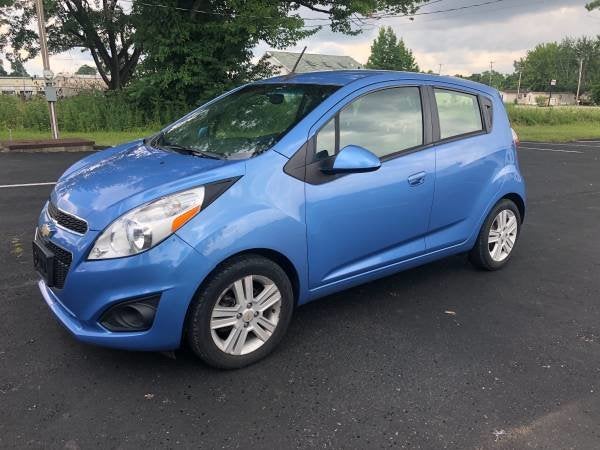 Average user score
4.3 ⁄ 5 stars
Based on 7 reviews
Cute Little Car!!! by holhol2 — I purchased this as my 4th GM car. I hope it holds up just as all the others have. I went from extended mini van, to 2 suv's and now that my kids are grown I am in the smallest one I could find to sa... Read more
Review by Levi — Superb gas mileage. EPA rates 27 city/38 hwy, but Ive been getting about 35 city/ 45 hwy. My gas budget has been slashed by more than half. Car handles very well and has a fun pep to its motion. By fa... Read more
Aside From Ac Would Highly Recommend by Iluvpugs — I've had this car about a year now and for the most part love it. It's very cute and I get tones of complements on the styling. The interior is very cool with detailing on the seats and dash. It is ve... Read more

All fit the 2013 Spark, Chevy’s new offering in the subcompact car segment, aimed at a younger, on-the-go demographic perhaps ready to add an urban-friendly car to the mass transportation piece of its getting-around-town arsenal.

The 4-seat, 5-door hatchback has been making a name for itself in Europe and other international markets for a bit, and the question now is how it will go over back home as the automaker introduces the smallest car, designed for city lovers and city livers, it has ever sold in the United States.

“Spark is the city driving solution,” Chevrolet claims. “The compact Spark slides easily into those tight parking spots that other cars don’t dare dream about.”

At 144 inches long, the 2013 Chevrolet Spark, offered in an array of flamboyant colors, is a little more than a foot shorter than its cousin the Sonic and will compete with fellow minicars such as the smart fortwo, Scion iQ and Fiat 500. In part because of its more upright seating position, Chevy says the Spark is a leader among its rivals in interior space.

The front-wheel-drive Spark certainly won’t appeal to everyone. It comes in LS, 1LT and 2LT trims, and Chevy sends both out with a 1.2-liter 4-cylinder engine that’s good for 85 hp and 82 lb-ft of torque and better suited for zipping the 2,300-pound little rig around the city than highway cruising. It comes equipped with a 5-speed manual transmission, and a 4-speed automatic is available.

Chevy promises the Spark’s fuel economy numbers will be competitive with others in the segment, which should mean it will get about 30 mpg in the city and near 40 on the highway. That’s one of the aspects of the 2013 Chevy Spark that makes it financially attractive.

The 2013 Chevy Spark’s design and color scheme add to the fun and funky part of the equation. Lemonade, Techno Pink and Jalapeno, with matching accents on the interior, are among the colors available. The vehicle’s exterior features huge, bug-eyed, headlights, and on the inside its futuristic gauges on a motorcycle-like dashboard are eye-catching as well.

Chevy, which has an electric version of the vehicle on the way, loads the Spark up with some high-tech features as well, or at least makes them available. Power windows, air conditioning and 15-inch alloy wheels come standard. Options include heated seats, SiriusXM satellite radio and a 7-inch color touchscreen sound system that is capable of displaying smartphone-based navigation including live traffic updates, media and contacts. Chevy’s MyLink system is also available.

What's your take on the 2013 Chevrolet Spark?

Have you driven a 2013 Chevrolet Spark?
Rank This Car

has anyone else had this happen on a 2013 spark? when it does it the speedometer stays at 0

Hi please help. I need to know the name of the part where the coolant outlet pipe joins the engine on a Chevy Spark 1.2, 2010/11.

I have a 2012 Chevrolet Spark when I'm sitting idle at a red light it like jumps or hiccups. No engine light or any lights are lighting up no one has any idea why it is doing this please it's drivi...

What Does Code T/c

my code light with a t/c came on. Any idea

797 views with 5 answers (last answer about a year ago)