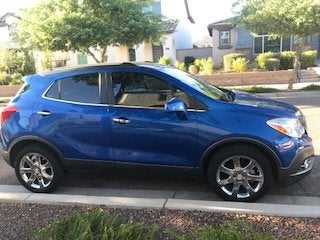 The race is on. Buick has just entered into the fray of the newly emerging class of luxury vehicles—the so-called compact SUV—with its 2013 debut of the Encore; Audi and BMW are expected to follow suit.

It’s like the “Mini Me” of crossovers (to use an analogy from a '90s comedy)—the front end and grille look strikingly similar to the full-size Enclave, yet this vehicle is under 170 inches long. Somehow it still manages to house 48 cubic feet of cargo with the rear seats down. The front passenger seat also collapses if you need additional cargo room.

No specific lines of trim have been announced, but Buick has said the Encore will use a 1.4-liter turbocharged 4-cylinder engine with 140 hp and 148 lb-ft of torque. That’s kind of disappointing, because it doesn’t seem like enough power to be truly called a utility vehicle, let alone a “sport.” The Encore will contain a 6-speed automatic transmission and front or AWD. The good news is that it is estimated to get over 30 mpg highway.

Buick says it has specifically engineered the car for an 18-inch tire; aluminum wheels come standard, with chrome as an option. Blue-accented projector beam headlamps add to the luxury dazzle. The Encore will be offered in 9 exterior and 3 interior color combinations.

The car has an unmistakable Buick stance, and a lot of care seems to have gone into its design. The touchscreen appears to be one of the most straightforward, with large, easy-to-read icons for each function. The interface does not emulate the popular iPhone, however, it’s more like Windows 7. Leather-appointed seats with matching gearshift and instrument panel with brushed chrome accents further increase the car’s appeal.

Newly implemented QuietTune technology will be standard on the Encore, an intriguing way to help keep the ride as silent as possible. In addition to using laminated glass and other sound-absorbing materials, Buick has employed a bit of “Old-School Sound Engineer” logic, by installing carefully placed microphones in the cabin to detect engine noise and subsequently sending subtle counteracting sound waves through the audio system to cancel it out.

Standard safety features include electronic stability control and 4-wheel disc brakes. Ten airbags are also standard, including ones for the knees and thorax (bet you didn’t know it needed special protection) and forward collision alert, lane departure warning and a rear-view camera are available as options.

This new mini-crossover vehicle line is expected to be all the rage this model year. Buick may be one of the first out the gate, but the competition has only just begun.

Terence Awesome vehicle surprisingly quick and agile for its size.I was driving through snow and ice and this little truck moved on with little or no effort given the road conditions.

Users ranked 2013 Buick Encore against other cars which they drove/owned. Each ranking was based on 9 categories. Here is the summary of top rankings.

Have you driven a 2013 Buick Encore?
Rank This Car

Can I Sell A Car I Am Paying On

I have a Buick I want to sell but I still owe on it. Can I make a sell like that without running off buyers?

How Can You Sell Me Such A Piece Of Garbage

I bought a 2013 Encore Buick and have had it to the shop twice now for things that should be caught bye your mechanics?

What Are The Problems With 2013 Buick Encore

Do 2013 Encores Have Rear Air Vents

do the 2013 buick encores have rear air vents