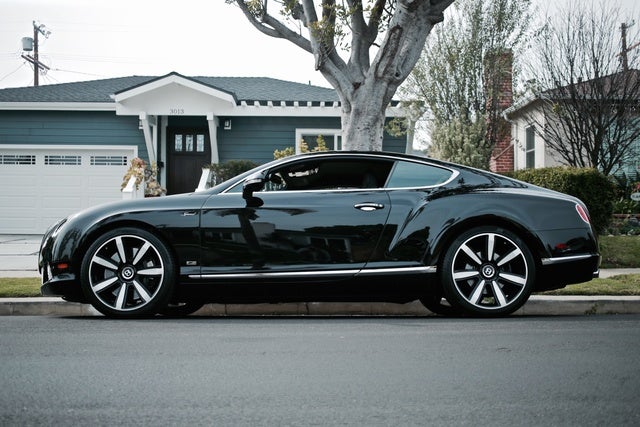 We said it might come to pass, and lo, those V8 rumors manifested as the 2013 Continental GTC V8 dream have come true. In addition, the W12 engine is sticking around but with the same freshened look, updated transmissions, revamped driving dynamics and interior refinements coming for the all-new V8. Given that these refinements are geared toward comfort and stability, it's still a really fast land yacht, ill-suited to manual track labor, but it's a beautiful land yacht, and it loves to entertain.

Shaking off its hallmark old-world charms, Bentley births the 2013 Continental GTC into a cleaner modern facade with squared, emboldened features and a beefier physique. Where the incumbent looked like a lithe lady basking in the sun, the 2013 takes on more strength in its lines—it's still a lovely lady, but she's stronger, appearing more as a dancer actively worshipping the swiftly passing road.

The Continental GTC's newfound beauty isn't just skin deep, as the new version gets 15 more horses and 37 more lb-ft of torque out of its twin-turbo W12 than the outgoing version (which is technically the 2011, since every 2012 GTC was more like an early 2013, although there's some debate here, apparently). In any case, the rigorous 2013 diet plan alongside agility tuning in the suspension really brings this dancer to life, forcing the 567-hp and 516-lb-ft-torque W12 to flow with carefully choreographed all-wheel-drive luxury. The result is supple, yet controlled and finely balanced, like a disciplined ballerina.

The new V8 is only slightly lighter and just a hair less speedy, with its 4 liters of engine mass capable of 500 hp and 487 lb-ft of torque, a broad power plateau propelling this 2-and-a-half-ton car to 60 mph just two-tenths of a second slower than the 6-liter W12, for a finish in 4.7 seconds. It also has a voice all its own—even though this engine debuted in the 2013 Audi S series, Bentley gave the V8 a pair of custom figure-8 twin tailpipes that make an especially satisfying growl.

Additionally, where the W12 will fetch 11 mpg city/19 highway on the optimum food for its flex-fuel diet, the V8 shines with a 500-mile stride at an EPA-estimated 14/24 on purely premium fuel. The V8 receives an ultra-smooth 8-speed automatic, the base engine carrying over with a retuned version of its 6-speed automatic, both equally utilizing the all-wheel-drive system's sporting rear bias to provide stability and balance through maneuvers.

The outgoing GTC featured slimmed front seats for a bit of extra legroom in the rear, but some adults might still feel the pinch, since these carry over. Otherwise the cabin is quite roomy and exceptionally luxurious, surrounding you in mostly supple leather, but also rich wood veneer and an automatic rear-seat-deployed rollover protection system, just in case. Usable interfaces collaborate well with an intuitive touchscreen infotainment system, although a 9.2-cubic-foot trunk somewhat necessitates the few added storage cubbies for 2013.

What's your take on the 2013 Bentley Continental GTC?

Have you driven a 2013 Bentley Continental GTC?
Rank This Car

how do I get the standard valuation assigned by Car Guru's adjusted to Reflect the Actual Value of My vehicle? Upgraded Factory options are not even considered in part of the Value Determination. Cust...