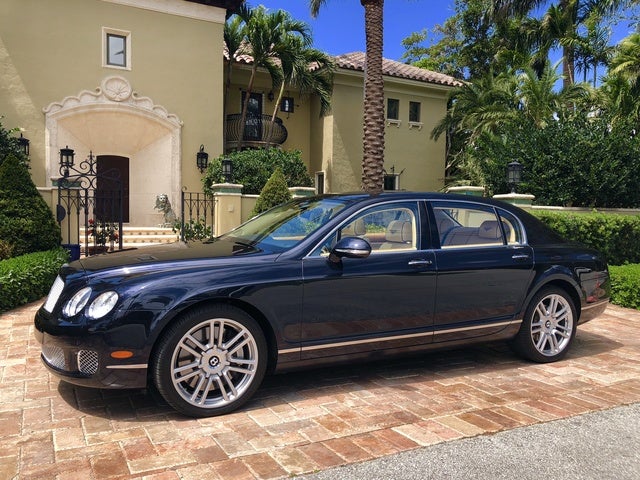 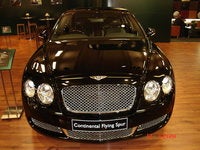 We're expecting a redesign of Bentley's Flying Spur and Flying Spur Speed to follow suit with its Continental brethren for 2013, but of all the mythical beasts made by Bentley, stories of this super-luxe 4-door saloon always seem few and far between. Some stories are probably fishing a little, but the going notion is the new Flying Spur will be a slightly longer 4-door version of the latest volume-leading Continental GT, and the Flying Spur Speed perhaps just an aggressive rendition of the same, with both likely having the option of a new gas-sipping V8 engine with valve-shutoff technology.

Beyond that is where the details get tricky. Leaked photos aside, some say the 2013 Continental Flying Spur will be outfitted with a spoiler and vented hood—I think they mean the Flying Spur Speed, of which there are no spy shots. However, those few leaked photos do tell a story in the tailpipes with that signature möbius two-pair view from the rear. There's no mistaking the V8 between its tailpipes and the especially satisfying growl they make together.

Bentley is definitely testing a V8 version of the Continental Flying Spur, but whether it will be released for 2013 is anyone's guess. Rumor has it the fuel economy is not much improved over the  Flying Spur's 11 mpg city/19 highway W12, a surprisingly far cry from the 18/26 achieved in other Continentals with this engine. Nevertheless, the W12 absolutely carries on with all of its glorious 479 lb-ft of torque from 1,600 rpm on up to its 552 peak horsepower at 6,100 rpm.

An extra chunk comes out of the Speed's fuel economy to the tune of 10/17 for the twin-turbo power boost, good for 600 hp and 553 lb-ft of torque for an unexpectedly comfortable 4-second sprint to 60 mph. Should the V8 make it to the finish in time, like every other Continental it would send power to all 4 wheels, but through an 8-speed automatic with paddle shifters, whereas the W12 setup keeps the same 6-speed. In either case, both systems are wholly dedicated to providing impenetrable balance no matter the conditions or driver.

So will the Flying Spur Speed take on the aggressive cues of not-so-old-world charms? This writer says no. Even though Bentley is pulling a few tricks out of its sleeve lately, the company is known for considering such things as hood scoops and spoilers eyesores on 4-door saloons. Sure, there's a first time for everything, but such fastidious craftsmanship doesn't tend to keep many illusions, instead preferring to simply outperform and excel at what it does best—mesmerizing grace in a simply flawless wrapper.

What's your take on the 2013 Bentley Continental Flying Spur?

Have you driven a 2013 Bentley Continental Flying Spur?
Rank This Car

Builders Club In A 2013 Flying Spur The Ebrakes Are Stuck

My Bentley emergency brakes. It won’t release so the car cannot move