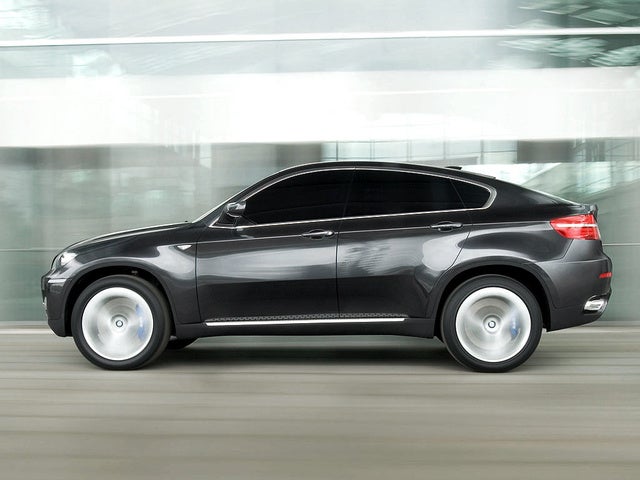 BMW still calls it a Sports Activity Coupe, but the 2013 BMW X6 M is neither a coupe nor especially sporty looking. This 4-passenger, 4-door, quasi-fastback pseudo-crossover fits no known automotive niche, but it sure is quick, and it’s way more nimble than your typical crossover ute. It will, however, likely get eaten alive in utility by the average midsize sport ute, and all the fancy suspension technology in the world isn’t going to prevent over 5,000 pounds of high-riding luxury crossover from feeling awkward and bulky through mountain-bound switchbacks. Nevertheless, according to most reviews, this M’s performance attributes can far outweigh its less-than-ideal practicality. Well-heeled tire-kickers can expect the latest edition to come out in the springtime.

In any case, expect a few tweaks to the front fascia and standard LED taillights, as well as available adaptive LED headlights for the 2013 X6 M. As with previous versions, look for about 60 cubic feet of cargo area with the rear seats folded, Beemer’s xDrive all-wheel-drive (AWD) system, an optional third rear seat and a screaming V8 powerplant that’s actually rated to tow some 6,600 pounds when properly equipped. Competition-wise, Honda’s humble and utilitarian CR-V has more cargo room; Porsche’s fancy Cayenne is about as fast, but more expensive; and Beemer’s own M3, even in coupe form, can’t quite match the X6 M’s quickness. Thus, we’re left with the conundrum of what to do with a misnamed coupe masquerading as an impractical crossover SUV. The answer, according to nearly all reviews, is to simply indulge your need for speed.

Giving the 2013 X6 M its considerable oomph is a direct-injected (DI) twin-turbo 4.4-liter V8 engine that mates with a silky 8-speed shiftable automatic transmission. This combination pounds out 555 hp and 501 lb-ft of torque and, according to the German automaker, screams from 0-60 in just over 4 seconds. The 8-speed automatic comes with steering-wheel-mounted paddle shifters and a brake hill holder feature, while the xDrive AWD system comes under the tutelage of a center mechanical differential and a center and rear limited-slip differential. BMW’s touted “intelligent” xDrive system, meantime, allows its M-designated crossover/Sports Activity Vehicle to cruise in rear-wheel drive (RWD) until wheel slippage is detected, when a goodly shot of torque is instantly transferred from the wheels that slip to the wheels that grip. Variable valve timing gives this mutant M an estimated 12 mpg city/17 highway burning the required premium gasoline. Oh, and pressing the "M" button on the steering wheel assures a little extra kick in acceleration and speedier shifts from the automatic.

Options, meanwhile, should once more include upgraded Nappa leather upholstery, three rear seats (for 5-passenger accommodations), Comfort Access keyless entry, satellite radio, four-zone climate control, windshield-projected head-up instrument display and rear-seat entertainment with a 6-DVD changer, many either as a part of various packages or as standalones. Also available are the Cold Weather Package, with heated steering wheel and heated rear seats, and the Premium Sound Package, with a 825-watt amplifier and Neodymium drivers. Further packages should include the Driver Assistance Package with, among other things, a rear-view camera with Top View and automatic high beams. Finally, the BMW Apps iPhone interface system is available for limited internet access, and optional soft-close doors will help prevent occupants from taking out any lingering frustrations on the doors and frame.

Of course, all the standard safety features found in the 2012 X6 M are brought back for the 2013 edition, including 4-wheel antilock brakes (ABS), run-flat tires, traction and stability control, front and rear head airbags, active front headrests and front side-mounted airbags. Also returning are daytime running lights and dusk-sensing, self-leveling xenon high-intensity-discharge (HID) headlights, not to mention emergency braking preparation, a post-collision safety system (including BMW Assist emergency services) and a remote antitheft alarm. Finally, a space-saver spare tire and side-view camera are both safety options, as are the new LED adaptive headlights.