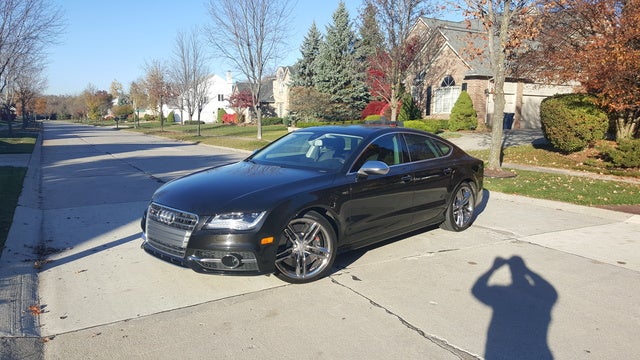 Porsche came out with the Panamera, and the world cringed. Turns out, we were just waiting for the S7—the car that proves a 4-door fastback can be done right. And while the S7 is unarguably better looking than the Panamera, a lot of its acceptance has to do with the twin-turbo, 4.0-liter V8 sitting beneath the hood, a natural upgrade for this sportier version of the A7.

That’s not to deride the A7’s supercharged V6, but to really compete in this class you have to come to the plate packing at least 8 pistons. Toss a twin-scroll turbocharger on there, and you’re really in business. Of course, staring into the engine bay of the S7, you’d never suspect forced induction, as the turbo is tucked neatly between the cylinder banks, leaving a clean, sorted look that’s just oh-so-German.

But those Germanic roots mean the S7 is about more than just acceleration—the autobahn is no straightaway, after all. While the A7 can more than handle itself at speeds considered supra-legal, the S7 gets some lovely upgrades that should make things even more enjoyable when pushed.

For starters, a standard adjustable air suspension drops the S7 0.4-inch lower than the A7, and at highway speeds another 0.4-inch is scrubbed off so the Teutonic touring machine can glide along with stout stability. Of course, set Audi Drive Select into Dynamic mode, and you can live at that lower plane, forever ready to tackle the nearest corner with suspension, steering, shifts and throttle response all tightened. A torque-vectoring sport differential is standard here, too, as it should be at this price point, and we don’t have to deal with any of the dynamic steering nonsense our Euro friends have to endure. Predictability is king here.

For those unfamiliar with the Audi stable, it may be hard to tell the difference between the A7 and its sportier brother, but the S7 does get some nice enhancements that distinguish with subtle grace. Look to the front for a gray grille and horizontal lines cutting through the lower diffuser and air intakes. The same treatment is found out back, flanked by the familiar quad-exhaust. Look harder and you’ll see aluminum mirror housings, too—an upgrade from the A7 without looking tacky. Inside there’s more of the same with wood and aluminum trim and a thick, wide, stitched leather steering wheel perfect for keeping your composure in tough turns. You can even upgrade the Nappa leather seats for sportier, diamond-stitched units with Valcona leather, which Audi assures is an upgrade.

But back to that impressive engine we glossed over previously. Try as hard as you want, there’s no ignoring a twin-turbo V8. It demands attention. 406 lb-ft of torque announce themselves with fury at just 1,400 rpm and stand fast until just a few hundred rpm shy of the arrival of the engine's 420 horses at 5,500 rpm. Yes, this is the same V8 that will power the S8 and the Bentley Continental GT, albeit in a severely detuned form thanks to a single air intake, unique pistons and the lack of an intercooler. Still, it’s enough engine to push the S7 to 60 in just 4.9 seconds according to Audi, and if previous estimates are any gauge, that means the S7 should do the scoot in real life closer to 4 flat.

That will be helped substantially by the S-tronic 7-speed transmission, which provides lightning-fast cog swaps from paddle shifters. It can be reluctant to downshift at lower speeds, however, which still prompts holdouts to lament the lost manual. Don’t hold your breath. The S-tronic is quicker and more efficient than a 3-pedal setup, and coupled with Audi’s start/stop and cylinder deactivation, the whole package manages to wring an estimated 16 mpg city/26 highway out of the S7. That's not terrible for a vehicle that can run easily to 155 mph before the computer steps in. Audi engineers tell us the S7 could touch 190 mph if left ungoverned, and if their top-speed estimates are as accurate as their 0-60 numbers, we can only assume an unrestricted S7 should crest 250 mph without effort.

Okay, perhaps an exaggeration there, but you just expect more out of the S7. It’s so poised, so stable that you never even consider losing traction—and you’d be stupid to try. Of course should emotion overcome reason, as it’s wont to do, there’s always the extra 100 horses in the S8. Go on, I dare ya.