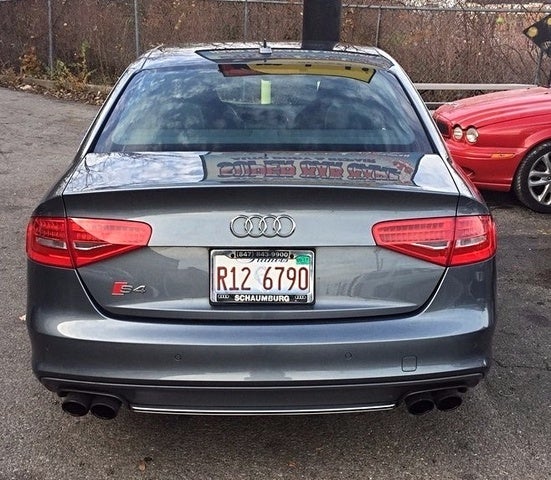 Audi’s super sleeper goes electric in 2013 as its A4 foundation enters its 8th generation. That’s right, it’s electric steering from here on out, boys, but Audi waited until those first few wonky iterations of the setup were tried in other applications before fitting it to their own darling. That way most of the complaining and criticizing—not to mention the adjusting and redesigning—was out of the way first. It’s not the only change in this mid-cycle update, but it’ll certainly get more press than the usual visual massage that leaves it different, but not too different. Thankfully, Audi had some other interesting adjustments in store.

Sadly, none of them are in the drivetrain. Not that the drivetrain needed adjusting, as the supercharged, direct-injected 3.0-liter V6 has always been a fan favorite despite landing directly in the middle of its class, power-wise. It wasn’t too long ago that 329 hp and 325 lb-ft of torque were newsworthy numbers, especially with the twisty bits arriving at just 2,900 rpm. Today they’re almost expected, even with a 29-mpg fuel rating. It speaks well for the character and delivery of this engine, plus it’s hard to argue with a 4.7-second sprint to 60. Moreover, there’s something to be said about having someone to look down upon, and the A4 fits that bill nicely. Knowing the S4 can stretch its legs up to 155 mph while the A4 is electronically limited to 130 is certain to put a sadistic smile on a few faces.

So if not the drivetrain, what’s new with the S4? All of the changes from the A4 are here, which means a more bulbous hood and a "new" front grille that really means the upper corners are now squared off and the horizontal lines accented slightly. Coupled with larger intakes at the lower corners, the whole arrangement has a widening effect when approached from the front. It does look good.

Of course, Audi’s signature lighting had to be addressed as well, and the familiar row of individual LEDs in the halo ring around the headlights has been chucked for LED light tubes. They surround new standard bi-xenon lights and some new fog lights take up space in those lower intakes, too.

Aesthetics are nice, but we want function, not just form. In that category, Audi has taken a look at the A4/S4’s all-wheel-drive issues—most specifically the tendency for the rear end to feel a bit anchor-ish. For a fix, Audi revised the mounting point for the rear control arms, and early reports have been positive, with testers noting some increased mobility in the rear. Of course, the S4 already had the jump on the A4 in the handling department with its sport suspension and a stance that brings it more than an inch closer to the asphalt than its lesser brother.

But the S4 was always a more ponderous affair than its German competitors, you say. And now with electric steering, things should only get worse, right? So far testers haven’t found that to be the case. Maybe the fact that the S4 never really handled with the violent agility of the M3 works in its favor here, as the change to an electric setup isn’t as noticeable. Or maybe Audi wasn’t lying when it says it's gotten it right. Plus, the point here is efficiency, and they have gotten that right. The powered assistance cancels out when it’s not being used, and Audi has even redesigned the system for faster fluid heating after a cold start. Matched with some internal engine friction reduction, they’re claiming 8 percent more miles per tank.

Inside, things are less contentious, as changes to form and function blend. Audi’s Multi Media Interface has been simplified with the button count dropping by half, and the S4 now comes with an available Wi-fi hotspot and 3D Google navigation.

Complain. I dare you.

No, the S4 isn’t the fastest and it isn’t the flashiest, but it’s a great car that gets better with each refresh and redesign. It’s never lost focus, and it’s never overextended its reach. Some say it occupies a nebulous zone between the darling A4 and the demented RS4, but for a silent majority it’s just right. And it's even still available with a 3-pedal 6-speed, too. That alone deserves some attention.

Users ranked 2013 Audi S4 against other cars which they drove/owned. Each ranking was based on 9 categories. Here is the summary of top rankings.

Audi "recommends" using 91 octane gas but "requires" using no less than 87 octane. Will using 87 octane on a regular basis harm my vehicle? From what I understand, today's hi-tech cars are designed to...

Is CPO Worth It On An Audi S4?

Need details from a reported accident