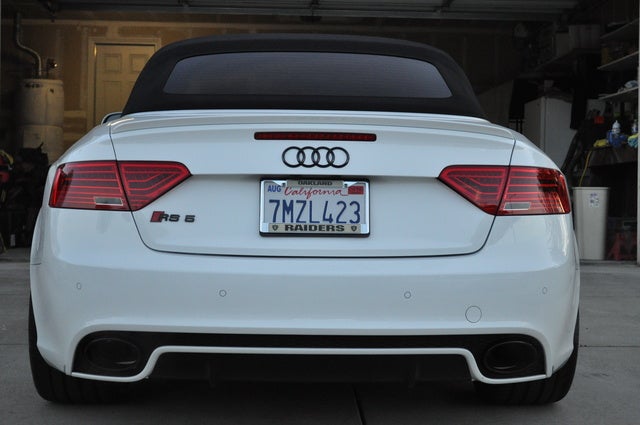 Looking for a Used RS 5 in your area?

The rest of the world has had its turn. Now we get to play with the RS 5 in North America. While the wait wasn’t preferable, it does mean Audi's mid-cycle refresh will be our debut. For 2013, the RS 5 got a facial that freshens up the front slightly, but otherwise received little aesthetic attention. Perhaps not a surprise for a design de'Silva describes as his “most beautiful ever,” but two changes for 2013 are certainly notable: the adoption of electromechanical steering and a revised Quattro system with a new self-locking, crown-gear center differential.

With the differential, all news is good, as it’s lighter, more efficient, and allows for torque variation that can send up to 70 percent to the front wheels or a chunky 85 percent to the rears. The steering has gotten a more interesting reception. Thankfully, electro-steering isn’t the death-knell it was just a few years ago, and it allows for the addition of tech like dynamic steering besides. Yes, the feel here isn’t the best in the industry, and you won’t find the RS 5 nipping at the heels of its Teutonic brethren, but it’s better than a lot of systems out there, and Audi claims it saves 1 mpg at the pump. And some testers have even gone so far as to claim that while the RS 5 falls behind the M3 and the C63 AMG on warm dry roads, nothing can touch it in the slop. Talk about subjective. I smell ice rally.

And then there were two. Rumors continue to fly regarding a forced-induction 6-cylinder in the next M3, which would leave the C63 AMG and the RS 5 as the places to go for a big V8 in a German sport saloon. In the RS 5, that means a 4.2-liter, 450-hp, direct-injected V8 that can deliver 317 lb-ft of torque between 4,000 and 6,000 rpm and will spool up to peak horsepower at 8,250 rpm. Sixty mph can be reached in just 4.5 seconds, and if you have the space, the RS 5 will finally leg out at 174 mph. No 3-pedal manual is available, but an S-tronic, 7-speed dual-clutch with launch control should keep you entertained.

No one dared touch an inch of that gorgeous sheetmetal, but new lights feature halos with LED tubes to replace the individual LEDs up front and a darker tinted lens cover in the rear. Lower grille and lip are untouched, but the center grill gets a new trim ring and the sharper corners as seen already, and a small change is made to the window trim as well, which is black rather than brushed metal. Inside you’ll have to look hard to notice the changes, but a new flat-bottomed steering wheel and shift knob are the most glaring differences. The OCD amongst you will notice a reduction of buttons in the MMI, and it‘s nice to see things simplify.

Carbon-ceramic brakes are still optional, but the standard iron discs have been shaved down to save 6.6 pounds total, too, and that’s important weight saved, little though it may be. There’s also an optional black-tipped sport exhaust with active acoustic flaps and forged 19-inch alloys. Feel free to opt for the optional 20-inch wheels, but be prepared for a penalty in ride quality, though supportive bucket seats try hard to soak up the bumps.

One man’s trash may be another’s treasure, but the RS 5 was never trash to anyone. Instead, it was just held hostage across the pond, and now we get to celebrate a brand-new car that’s already 3 years old. Sure, we could be bitter, but I prefer to think Audi was waiting until they got the RS 5 just right before they introduced us. It was only polite after all, and the RS 5 was worth the wait.

Rick Out of curiosity I want to know the range on a tank of gas.....regardless of the number it's not a deal breaker.

Looking for a Used RS 5 in your area?

Do You Know If The Side Mirrors Fold In?