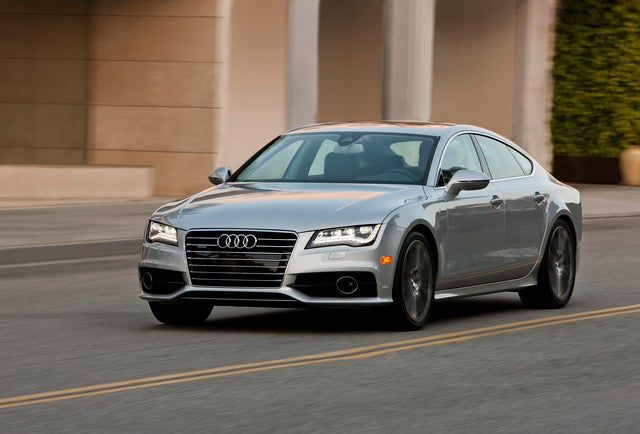 Average user score
5 ⁄ 5 stars
Based on 8 reviews
Review by KingSheard — Its An Audi! No more to say! But if I hadnt gotten a Bmw I would of definitely gotten an Audi A7. In fact Im thinking of trading my car in for one. Read more
Review by Sarmed — Amazing car that is incomparable and slick design and the spoiler button is fantastic Read more
Review by Donte — Great car can’t wait to open her up on the road ! Read more

The Audi A7 burst into the luxury automobile picture with a bang for 2012. The good folks at Audi aren’t about to mess with success, so bring the 2013 Audi A7 to market with few changes other than a tweak here and there. In fact, Audi hopes to build on its latest big hit with the S7, a new model for 2013 that's more powerful than the A7 but in general does not stray too far from the vehicle deemed a Car of the Year contender by several outlets.

The 2013 Audi A7, labeled a “Sportback” by the manufacturer, again draws enthusiastic raves for its ability to combine first-class styling, inside and out, with first-class performance. Words such as gorgeous and luxurious dot reviews and comments on the Audi A7, and “stunning” perhaps appears more often than any other.

In short, the experts find much to like about the 2013 Audi A7 and very little with which to quibble.

Some reviewers, in fact, first expressed surprise that Audi delivered the A7 with a supercharged V6 and not a V8. Then the performance of the V6 promptly proceeded to win most doubters over. Good for 310 horsepower and 325 lb-ft of torque, the 3.0-liter V6 gets 18 mpg city/28 highway, according to EPA estimates, and provides plenty of power, reviewers feel. Start/stop technology is new for 2013. For those who insist on a V8, there’s the S7.

The V6 teams with Audi’s 8-speed automatic transmission, which also has Tiptronic manual controls. The A7 comes with Audi’s Quattro all-wheel drive (AWD), and its Audi Drive Select allows the driver to choose between four different modes—Comfort, Auto, Dynamic and Individual—that control several variables, including throttle responsiveness and steering feel.

Experts term the 2013 Audi A7, itself based on the A6 though a good amount more pricey, fun to drive and appreciate its smooth ride and refined handling at various settings.

The 2013 Audi A7 seats only 4, which is seen as a drawback to some. Even at that, the sleek roofline that helps give the vehicle its striking and classy exterior styling makes headroom tight for those in the backseat. There is legroom aplenty.

The cabin not only offers a super-quiet ride, but receives top grades for its styling as well as the high quality of its materials. It also, thanks to the hatchback, er Sportback, offers good-sized and versatile cargo space for this class.

A top-of-the-line navigation system is available for the A7, and Audi sets it up with 3D Google Earth imagery and Sirius traffic updates along with a SIM card that can create a mobile WiFi hotspot.

The 2013 Audi A7 comes with electronic stability and traction control systems, 4-wheel antilock brakes with brake assist and a full array of airbags. Audi also offers an Innovation Package with the A7 that includes a blind-spot monitor, LED headlights, a pre-sense system that monitors traffic and alerts the driver if a potential collision is detected and adaptive cruise control, which makes adjustments if the car is approaching another vehicle too quickly.

Users ranked 2013 Audi A7 against other cars which they drove/owned. Each ranking was based on 9 categories. Here is the summary of top rankings.

TeeHugs asked a 2013 Audi A7 3.0T quattro Prestige AWD Maintenance & Repair question about a year ago

I travel with work. So I'm on the road alot. I got oil changes but it seems they weren't regular enough. With my recent oil change I was told the inside is black and nasty. Can it be cleaned? Can I...

52 views with 5 answers (last answer about a year ago)

Do Prices Include Estimated Tax, Title And License