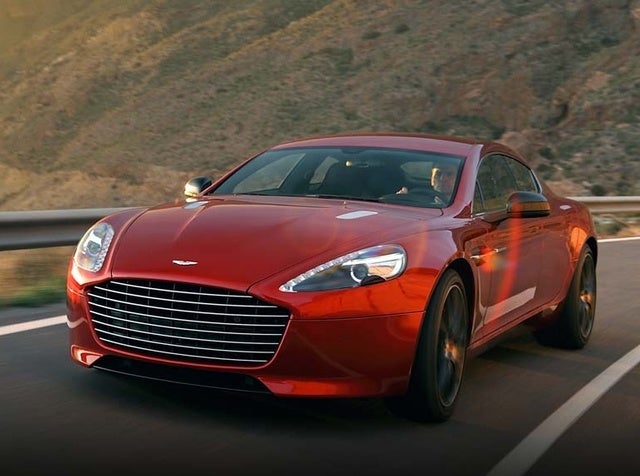 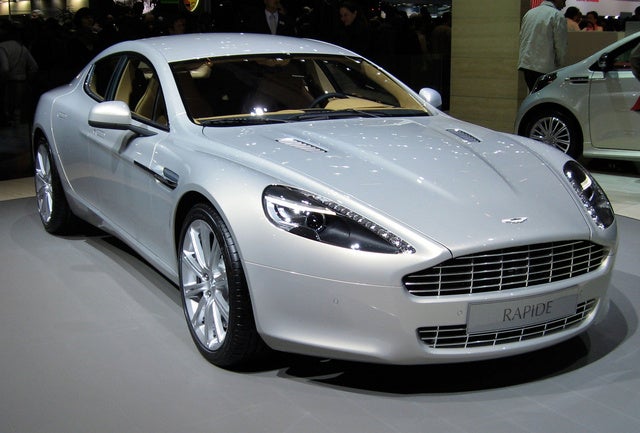 The Aston Martin Rapide 4-door luxury sedan enters its unofficial second generation for 2013, and to commemorate the event, the automaker adds an "S" after the Rapide's name to serve as an indication of a number of significant upgrades. For starters, Aston Martin equips the 2013 Rapide with a new AM11 Gen4 6.0-liter V12 engine, which also powers the automaker's iconic DB9 Coupe and the new Vanquish GT roadster. For its application in the Rapide, the new V12 produces 550 hp, an increase of 80 hp over the previous year, making the Rapide the most powerful 4-door Aston Martin ever produced and sending the vehicle's performance into the stratosphere. In addition, torque increases by 14 lb-ft, to an eye-popping 457 lb-ft for 2013. Aston Martin says the Rapide can now rocket from 0-60 in just 4.7 seconds, compared to 5.1 seconds for the previous year's version. Top speed climbs to 190 mph, up from 188 mph.

Those are some pretty amazing numbers to begin with, but the fun doesn't stop there. Aston Martin positions the new V12 about 1 inch further down in the chassis, which lowers the vehicle's center of gravity and helps improve handling and stability. In addition, the Rapide receives a new 3-mode Adaptive Damping System with Normal, Sport and Track settings, enabling drivers to dial in their preferred handling and ride specifications. Aston Martin pairs the V12 with a mid-mounted Touchtronic 2 6-speed automatic transmission with a glass shift knob and steering-wheel-mounted magnesium paddle shifters, enabling drivers to shift manually. The EPA estimates fuel economy numbers of 13 mpg city/19 highway.

Aside from the new V12 powerplant, the Rapide's most potent drawing card remains its stunning exterior design. Derived from the DB9 Coupe but stretching more than a foot longer to accommodate a second row of seating, the Rapide displays elegant exterior lines that flow gracefully from the elongated nose to the curvy tail. While the attractive design remains essentially unchanged for 2013, Aston Martin made a few updates to the front and rear ends. Up front, the Rapide now displays a single full-face aluminum mesh grille, which replaces the previous year's smaller upper and lower grilles, resulting in a more aggressive, wide-mouthed look. The new grille also has a safety aspect, the automaker says, since it was designed to comply with European pedestrian impact protection standards.

At the rear, the Rapide gets a redesigned trunk-mounted spoiler with a more pronounced flip, which also helps to improve stability, as well as aerodynamics. The gracefully arced hood, swept-back bi-xenon headlights and gently contoured sidelines, which flow over the wheel wells, all remain untouched for 2013, as does the cabin's low profile, which gives the Rapide its definitive muscular looks and sets it apart from just about anything else on the road today. Other exterior features include LED taillights, flush door handles, power folding heated exterior mirrors, dual exhaust pipes and 20-inch multi-spoke silver alloy wheels with a diamond-turned finish. A number of optional wheels are available, including 20-inch Gloss Black wheels and 20-inch, 20-spoke polished aluminum wheels. An optional Carbon Exterior Pack, new for 2013, adds a number of sport-oriented features, including a front splitter, rear diffuser, mirror caps and rear taillight infills, all composed of carbon fiber.

Due to the Rapide's stretched length (197.6 inches vs. 185.8 for the DB9), Aston Martin stiffened its frame and chassis to ensure tight handling and solid build quality. The Rapide sits on the automaker's rear-wheel-drive VH platform, which it shares with the DB9, the Vanquish and the Vantage. Both the independent front and rear suspensions feature a double-wishbone configuration, with coil springs and anti-roll bars, as well as anti-dive geometry in the front and anti-lift geometry in the rear. The rear also includes monotube adaptive dampers. In addition to the new 3-stage adaptive damping system, the Rapide includes a limited-slip differential as standard equipment, as well as Servotronic power-assisted, speed-sensitive rack-and-pinion steering. In addition, the automaker equips the Rapide with dual-cast disc brakes in both the front and the rear, with 6-piston monobloc calipers in the front and 4-piston monoblock calipers in the rear, providing plenty of stopping power.

Testers find the Rapide's ride and handling smooth and refined, befitting a luxury sedan, with aggressive acceleration, effortless shifting and a satisfying thrum from the big V12. Press the Sport or Track buttons on the new adaptive damping system, however, and the suspension noticeably stiffens, resulting in more responsive handling, although ride comfort naturally suffers. Despite its length and weight, the Rapide has a surprisingly agile feel, testers say. Although there's some body lean in corners, the damping system quickly adjusts for it. In addition, reviewers say the Rapide's steering system bests that of competitors such as the Porsche Panamera.

When the Rapide debuted in Aston Martin's lineup in 2010, its only true ancestor was the Aston Martin Lagonda, a low-production vehicle offered from 1974 to 1990. Like the Lagonda, the 4-door Rapide seats 4 passengers in a 2+2 configuration. Some testers say the Rapide's instrument cluster has a strange counterclockwise layout, and they say the navigation system seems out of date. In addition, legroom in the rear seat might be tight for some taller passengers, who also might find the executive-style seats a bit too tight for comfort, due to a wide center console.

From there, however, it's all uphill, thanks to a wide range of luxury-oriented features that come standard on the Rapide, including leather upholstery from the British village of Bridge of Weir, heated front sport seats with power adjustment and memory, a leather-wrapped sport steering wheel and walnut interior trim with carbon fiber accents. A navigation system with a pop-up screen comes standard, although some say it lags behind typical navigation systems found in a wide range of vehicles with much smaller price tags. A 1,000-watt, 15-speaker Bang & Olufsen audio, devised specifically for the Rapide, also comes standard, along with all the other expected amenities, including Bluetooth and satellite radio, as well as automatic climate control, an auto-dimming rear-view mirror and even an umbrella in the trunk.

For 2013, Aston Martin offers a new optional Piano Black Interior Pack, which adds a black, mirror-like shine to accents in the dashboard and center console, as well as the instrument panel and steering wheel. Other options include duotone black and red perforated leather upholstery, a twin-screen backseat entertainment system with a 6-DVD changer, personalized sill plates and a variety of alternative wood trims, including mahogany, bamboo and ash.

In addition to the Panamera, competitors for the Aston Martin Rapide include such luxury sedan stalwarts as the Mercedes-Benz S-Series and the BMW 7 Series, as well as more exotic fare like the Maserati Quattroporte Sport GT S and the Bentley Continental Flying Spur. The Rapide was originally built in Austria, although production was relocated to the company's plant in Gaydon, England, in 2012 when sales lagged. Current reports say 2013 production numbers will be under 1,000, and could be as low as 500, ensuring the vehicle's rarity.

What's your take on the 2013 Aston Martin Rapide?

Have you driven a 2013 Aston Martin Rapide?
Rank This Car