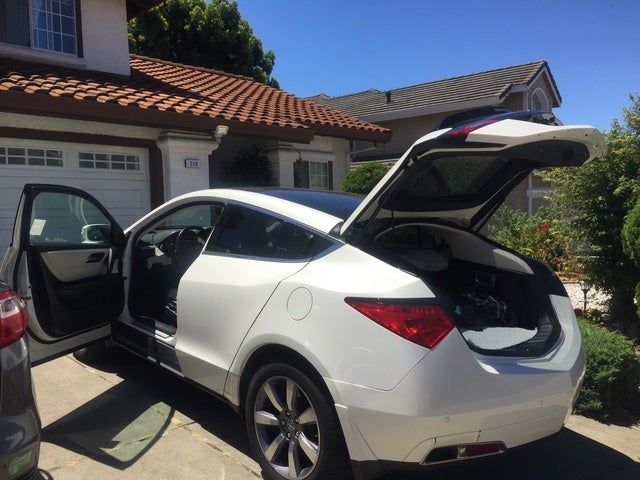 Three is apparently not a charm for Acura's ZDX. Just over 600 sold wasn't quite Acura's target for 2012, so for this fourth and final production run, Acura pulled out all the stops for a more elegant look and packed the ZDX with high-end features like power-folding side mirrors and various danger-detection systems in hopes these changes will help more drivers overlook the various quirks of owning a ZDX. If rear headroom, cargo and towing capacity sit somewhere near the bottom of your wish list for a 5-passenger SUV and style tops it, the quirky ZDX coupe was built for you—and 2013 is your last chance to get your hands on a new one.

Based on the MDX, the ZDX is meant to have a sportier look for the nimble utilitarian, but the ZDX's fastback style and body construction significantly cut back on its utility. It's just as nimble, having the same Super-Handling All-Wheel Drive (SH-AWD) system and precisely the same V6, but instead of a 5,000-pound towing capacity, the ZDX can handle only 1,500 pounds. Instead of 3 seating rows and 83 cubic feet for cargo, the ZDX offers 2 rows and 56 cubic feet, though the ZDX offers 26 cubic feet with the seats up, whereas the MDX offers only 15. Fuel economy is slightly better at 16 mpg city/23 highway, as opposed to the MDX's 16/21, but the MDX is reportedly 0.2 seconds quicker to 60 mph than the ZDX's 7.3 seconds.

Otherwise the MDX and ZDX are pretty much the same car, but the ZDX turns a lot more heads. While it's unusual to see a classic SUV rip around an on-ramp curve at 60 mph, the ZDX has the MDX's performance surprise plus a touch of stylistic oddity. Too big to be a regular coupe, too small to be a regular SUV and too gorgeous to be made by anyone but Acura, the ZDX garners a lot of compliments for its drivers. For 2013 the front end is simpler, exuding an even more elegant beauty, and the feature list now basically includes everything that was previously an option to boost sales for this last hurrah.

That long list of 2013 standard feature additions includes Acura's 10-speaker Surround Sound audio system, 15GB of music storage, a navigation system, an 8-inch display, multiview camera system, front and rear parking sensors, Bluetooth connectivity, heated and ventilated perforated leather front seats, passive keyless entry with push-button start, automatic climate control, forward collision warning and lane-departure warning systems. All this for just a $4,800 price increase to the only trim offered. Although drivers were hoping for a package without the panoramic sunroof, it seems that option and perhaps any other feature packs will be off the table for this final year.

Pumping out 300 horses and 270 lb-ft of torque on premium fuel, drivers offer no complaints about the 3.7-liter V6 powering the ZDX. Although the only transmission is a slightly outdated 6-speed automatic with manual shift control, drivers comment time and time again on how fun it is to drive and the transmission's flawless performance. Drivers seeking the sporting thrill only an adjustable suspension can provide should still be able to opt for the Advance package, but magazines and drivers alike say the ZDX is still very much a smile-making machine without it.

Users ranked 2013 Acura ZDX against other cars which they drove/owned. Each ranking was based on 9 categories. Here is the summary of top rankings.

Have you driven a 2013 Acura ZDX?
Rank This Car

How Come They Are Not Showing Listings For The ZDX Search That I Have Saved...