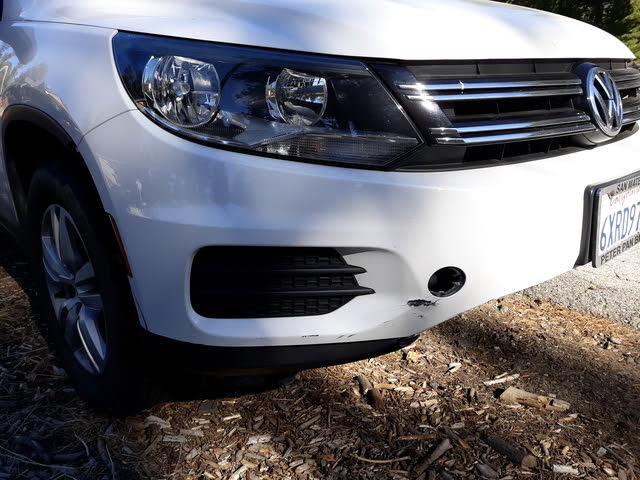 A comparatively cramped cargo area, a rather steep MSRP, some tepid mileage numbers and the need to fill up with premium gasoline might prompt a few tire-kickers to look at alternatives to the 2012 Tiguan.

For the 2012 crossover needs of the well-heeled small family, Volkswagen’s slightly re-worked Tiguan lineup provides a rather handsome alternative. Upscale Euro-styling inside and out, along with an uncanny agility, better-than-decent ride comfort and turbocharged power all combine for a pleasant journey to work or the mall. Heck, with its standard 6-speed stick-shift transmission, even the base trim offers a bit more driving panache than your run-of-the-mill commuter car.

Flaunting an upscale cabin and some sporty driving dynamics, the 2012 Volkswagen Tiguan oozes Euro style and sophistication. Add to that turbocharged power and 56.1 cubic feet of cargo space with the rear seatbacks folded (23.8 cubic feet to the rear seats), not to mention available full-time all-wheel drive (AWD), and you’ll find that practicality and family values can be fun after all.

This 5-seat compact crossover comes in a bunch of trim levels, beginning with the base S and climbing from there to the new-for-2012 LE, the upper-midlevel SE and the top-echelon SEL. All trims are delivered with standard front-wheel drive (FWD), though all except the LE are available in an AWD-toting 4Motion sub-trim.

For 2012, besides the up-ticked LE trim, the Tiguan lineup shows off a few design tweaks at nose and tail, as well as an upgrade to the shiftable automatic transmission for a boost of some 2 mpg over last year's editions. Also new for this year, the flagship SEL trim is delivered with standard 19-inch alloy wheels, adaptive xenon headlights and LED daytime running lights. 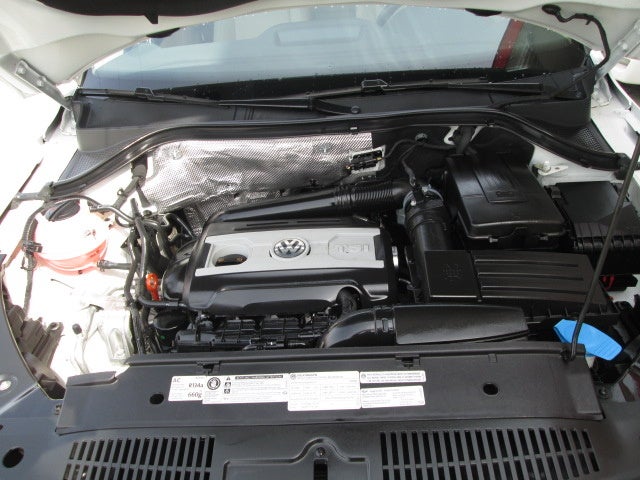 The only powerplant offering for the 2012 Tiguan lineup is a turbocharged 2.0-liter inline 4-cylinder engine. This peppy little four-banger hooks up with a standard 6-speed manual transmission in the FWD base S trim, and with the standard 6-speed shiftable automatic in all other trims, for 200 hp at 5,100 rpm and 207 lb-ft of torque at 1,700 rpm. Of course, the automatic is available to the entry-level FWD S while remaining standard in the 4Motion variations lineup-wide.

Variable valve timing (VVT), meanwhile, allows the stick-shift-equipped S to get an estimated 18 mpg city/26 highway, hardly stellar numbers. When bolstered by the automatic transmission, however, fuel economy numbers in the rest of the lineup look a bit better, with FWD-toting trims estimated at 22/27 and 4Motion editions getting an estimated 21/27. Be advised, however, that Volkswagen recommends burning only premium gasoline in the turbocharged I4.

Volkswagen’s touted 4Motion full-time AWD system again splits torque evenly among all 4 wheels on sun-dappled straight roads and then automatically adjusts torque to individual wheels for some added cornering grip. When things get slippery, the 4Motion technology kicks in to transfer torque instantaneously from the wheels that slip to the wheels that grip.

Oh, and by the way, with the available towing hitch installed, this not-so-voluminous VW can haul up to 2,200 pounds of trailer.

With acceleration from 0 to 60 clocked at 8.4 seconds, reviewers find the Tiguan’s oomph to be about average for the class. A number of reviewers mention some noticeable turbo lag from the blown four-banger, especially when attempting to power out of a slow corner. However, reviewers note that there’s plenty of oomph available for almost all driving situations, while both transmissions are lauded as smooth and alert. The automatic is especially praiseworthy, according to more than a few reviews, for prompt and silky downshifts, whether in straight automatic or auto-manual mode. Additionally, most reviewers remain impressed with the I4’s quiet refinement, noting that it remains thrillingly throaty on hard acceleration and nearly silent at cruising speed.

Reviewers compliment this compact crossover for its surprisingly compliant ride, with all noting that most bumps and cracks are well-damped. Most reviewers note that tire-size and trim selection matter little to ride comfort, but a few are inclined to mention that the S and LE trims provide a smoother trip than does the SE, while the SEL, with its sport-tuned suspension, offers a ride that might be a bit on the stiff side for some.

Where this pint-size people-hauler shines for most reviewers is in its handling capabilities. A low center of gravity and the sedan-like chassis make for some heady cornering moves, though at least one reviewer was disappointed with the body lean and noseplow displayed by the base S trim in even moderate corners. Be that as it may, most reviewers are impressed with the accurate steering displayed in this downsized crossover at highway speeds, though a couple of reviews mention that the steering wheel might feel a bit light in low-speed maneuvers.

Brake tests of this year’s Tiguan find it stopping in a class-average 126 feet from 60 mph, leading reviewers to laud this little crossover for its dependable stopping power.

Tricked out a bit more elaborately than some of its lesser rivals, the 2012 Tiguan sports a cabin ambiance that is both welcoming and Euro-chic. The base S trim, for example, boasts standard trailer wiring, heated power-adjustable mirrors and a power liftgate outside, with cloth upholstery, height-adjustable front seats, reclining and sliding rear seats, and a fold-flat front passenger seatback on the inside. Meanwhile, remote power door locks and 4 one-touch power windows with remote operation are complemented by cruise control and telescoping tilt-wheel steering, with all of this embraced by manual air conditioning. Bluetooth hands-free calling, finally, goes hand-in-hand with the standard MP3-capable single-CD player with its 8 speakers and auxiliary MP3 input.

The brand-new LE tacks on leatherette upholstery, heated front seats and a USB port, with the midlevel SE throwing in a roof rack, a power-adjustable driver’s seat, leather-wrapped steering wheel and shift knob, front and rear floor mats, and a 7-inch touchscreen directing audio functions, including satellite radio and a memory card slot.

All 2012 Tiguan trims are eligible for an optional panoramic sunroof, with all but the base S trim additionally eligible for the available flash-memory-based navigation suite with touchscreen interface. The SEL trim is also in the running for the available premium Dynaudio entertainment system that pumps 300 watts into 8 speakers, as well as a rear-view camera added on to an upgraded navigation suite with a larger touchscreen interface. Dealer-added accessories lineup-wide, meantime, include side steps, a trailer hitch, upgraded floor mats and splash guards.

Reviewers note VW’s compact crossover is a bit more upscale, amenity-wise, in comparison to most rivals. Passenger room is plentiful, even in the rear seats, according to virtually all reviewers, while seat comfort rivals that found in the most expensive crossovers out there. Gauges, meanwhile, are described by reviewers as large and easily readable, while controls are faultlessly located, well-marked, simple to use and decidedly functional. Entry and exit are facilitated by what most reviewers claim are wider than ordinary front and rear doors, while visibility is described as way better than average.

Only the Tiguan’s rollover protection has been tested by the National Highway Traffic Safety Administration (NHTSA) for 2012, earning its second-highest score of 4 stars.

Some glitches in the 2012 Tiguan’s automatic transmission have become the top reason that some owners are dissatisfied with their new Volkswagen. A number of owners also question the tepid mileage figures, especially with the 6-speed manual, while others wish for a little more cargo space. At least one owner complains that the available trailer hitch is way overpriced and far too complicated and time-consuming to install. Further complications noted by owners include the lack of a diesel option, some indistinct control markings and a nasty tendency in the I4 powerplant to stall out at inopportune moments, an anomaly that other owners claim can be remedied by a software fix by the dealer.

On a more positive note, most Tiguan owners are sublimely happy with this pint-size crossover’s Euro-styling and agility, as well as its turbocharged alacrity and unexpectedly posh accommodations. The stick-shift-equipped S is noted by more than a few owners to provide a little extra kick to the drive, while this pint-size VW’s compact dimensions in all variations take much of the discomfort out of maneuvering in tight spaces.

What's your take on the 2012 Volkswagen Tiguan?

Users ranked 2012 Volkswagen Tiguan against other cars which they drove/owned. Each ranking was based on 9 categories. Here is the summary of top rankings.

Have you driven a 2012 Volkswagen Tiguan?
Rank This Car

I WAS GOING TO PURCHASE 2012 VW TIGUAN FROM CAR GURUS BUT I ORDERED CAR FAX AND IT SAID IT WAS FRONT WHEEL DRIVE NOT ALL WHEEL DRIVE. DO YOU CHECK THE VIN PRIOR TO LISTING? YOU ADVERTISED AS A 4MOTI...

My 2012 Tiguan 2.0 TSI w/ 68k miles on it was running fine Wednesday afternoon but by Thursday morning it was not running. I would get the car to idle very tough but once I stepped on the accelera...

How Long Can I Drive With Misfiring Cylinders

I got an engine light on for few days now. A shop diagnosed it as "multiple cylinders misfire..". It can be coils, plugs or a fuel filter... I added a fuel filter chemical cleaner in the gas tank y...

I got an engine light on for few days now. A shop diagnosed it as "multiple cylinders misfire..". It can be coils, plugs or a fuel filter... I added a fuel filter chemical cleaner in the gas tank y...

What Is Manufacturers Warranty On A 2012 Tiguan Vw