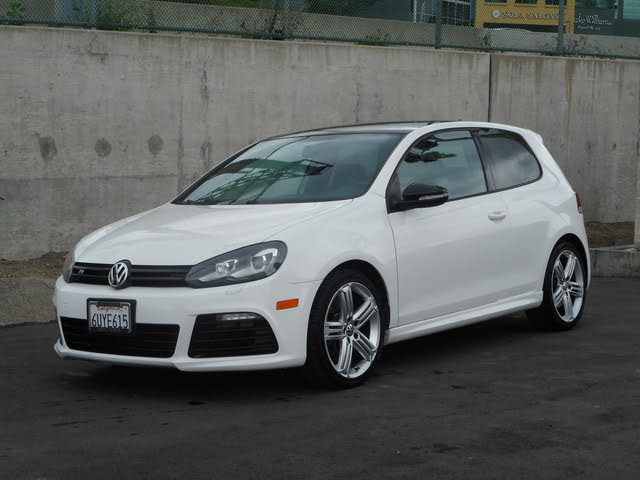 The 2012 Volkswagen Golf R fills a small but important niche in the automotive marketplace, combining a true turbocharged, performance-oriented ride with a comfortable, well-equipped cabin, superior handling characteristics and the functionality of a hatchback.

Although it jumps out from 0-60 mph in less than 6 seconds, the 2012 Golf R doesn't quite match the spirited performance of such competitors as the Mitsubishi Lancer Evolution GSR or the Subaru Impreza WRX STI 5-door, and its rear seat can be tight for taller adults.

While it doesn't quite match the screaming performance of hot-hatch competitors like the Evolution GSR or the WRX STI 5, the Golf R offers a higher level of refinement inside, which balances out the equation. It also offers better fuel economy than many of its competitors, with numbers topping out at 27 mpg. Prospective buyers in the market for a rocket-powered hatchback will want to test-drive a number of vehicles, but more than likely, at the end of the day, they'll find the Golf R represents the most well-balanced vehicle in its high-powered class, offering both performance and comfort.

A direct successor to the performance-oriented Golf R32, which made appearances in Volkswagen's lineup in 2004 and again in 2008, the new 2012 Golf R builds on the existing Golf base hatchback but adds a number of unique upgrades, including a turbocharged powerplant, improved handling characteristics, distinctive exterior styling and an expanded standard features list. In addition, the Golf R comes equipped with the automaker's 4Motion all-wheel-drive (AWD) system, and boasts more fuel-efficient operation than its predecessors while at the same time delivering more hp.

Volkswagen offers the 2012 Golf R in 2-door and 4-door hatchback body styles, at entry-level base and better-equipped Sunroof and Navigation trim levels. All Golf R trims receive a specially tuned 2.0-liter turbocharged TSI 4-cylinder engine, which puts out 256 hp, up 6 hp from the 2008 Golf R32's 3.2-liter V6. That makes the 2012 version of the R the most powerful Golf ever offered in the U.S., according to the automaker. VW pairs the turbo engine with a short-throw 6-speed manual transmission, but does not offer an optional 6-speed DSG automatic transmission in the U.S., as it does in Europe. Fuel economy numbers for the Golf R's turbocharged powerplant top out at 27 mpg, an improvement over the 2008's V6.

Outside, the Golf R carries forth many of the exterior design elements found on the standard VW Golf hatchback, including clean, minimalist lines, swept-back headlights and pronounced wheel arches. However, the Golf R receives a number of unique exterior upgrades designed to help it stand out from the crowd, including a restyled front end with a new bumper, a black-gloss radiator grille, 3 large front air intakes, LED daytime running lights and black-framed HID headlights with an Adaptive Front Lighting System, which enables them to swivel up to 15 degrees when the driver turns the steering wheel. The Golf R also displays flared side skirts, exterior mirrors with a black-gloss finish and new 18-inch aluminum-alloy wheels. A new rear bumper, a black-gloss diffuser and dual centered exhaust pipes complete the Golf R's look. Exterior colors for 2012 include Rising Blue, Candy White, Tornado Red, Carbon Steel Gray and Black.

A number of reviewers have favorably compared the Golf R to the much more expensive Audi TT 2-door sport hatchback, which makes sense, since the R borrows certain engine, chassis and AWD components from the TT. While the Golf R doesn't quite match the TT's level of stellar performance and handling, it comes close enough to make it a viable alternative for buyers who want a hot hatch like the TT but are looking to save about $20,000 on the price tag. Since both automotive marques are owned by parent company The Volkswagen Group, it makes sense that VW would enhance the Golf R with some of the TT's technology, resulting in an affordable, functional speedster.

Competitors for the Golf R include the Subaru Impreza WRX STI 5-door, the Mitsubishi Lancer Evolution GSR and the BMW 128i Coupe. All are comparably priced, although the 128i remains the least expensive of the group. For power, the Lancer Evolution GSR tops the field with 300 hp, with the WRX STI right behind, while the 128i and Golf R lead the way in fuel economy. In head-to-head comparisons, the Lancer and WRX out-perform the Golf R, due in part to the Golf R's AWD system and large 18-inch tires, which impede optimal sporty performance. Reviewers also note that despite its exterior upgrades, the Golf R remains hard to distinguish from the standard Golf trims. However, reviewers say the Golf R offers a more refined cabin and a more solid feel than most of its competitors. To ensure the Golf R's exclusivity, VW will limit annual production to 5,000 units. 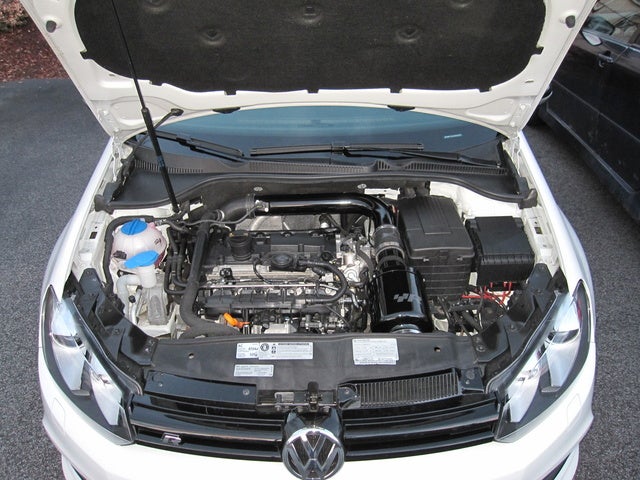 Essentially a de-tuned version of the same powerplant found in the Audi TT, the Golf R's 2.0-liter turbocharged 4-cylinder engine generates 256 hp and 243 lb-ft of torque. That compares to 250 hp and 236 lb-ft for the 2008 Golf R32's V6 engine. The Golf R also delivers better fuel economy numbers than its predecessors, posting numbers of 19 mpg city/27 highway, compared to the R32's 18/23.

VW pairs the turbo engine with a close-ratio, short-throw 6-speed manual transmission designed for high-torque operation. Volkswagen says the turbocharged powerplant will drive the Golf R from 0-60 in 5.6 seconds, making it the fastest VW available today. However, independent testing puts the 0-60 time at closer to 5.9 seconds. Testers say it's possible to achieve the 5.6-second time only with micro-second shifts, which are difficult to perform by many non-professional drivers.

Volkswagen equips the Golf R with its 4Motion AWD system, which comes from Haldex Traction, a Swedish manufacturer. The system, which is the same one used by Audi, although with a different name, monitors traction on all tires and automatically sends power to tires with the most traction when it detects slippage. Again, by using the same AWD technology as its upscale partner, the Golf R shares similar performance and handling characteristics with the Audi TT and TT RS. In fact, numerous reviewers comment on the performance-oriented similarities between the Golf R and the Audi TT, a high testament to the R's capabilities.

The 2012 Golf R rides on an enhanced sport suspension with a number of upgrades, which put it a big step above the standard Golf hatchback in the handling department. The R's suspension features an enhanced damper-strut configuration in the front with a stiff anti-roll bar, designed to reduce body roll and heighten steering feedback. In the rear, VW uses a compact multilink independent layout with coil springs, telescopic dampers and an anti-roll bar. The automaker tunes the suspension geometry for neutral behavior or with some slight understeer, which results in good stability and handling on all types of road surfaces. The AWD system also helps improve grip in corners and overall handling.

The suspension enhancements make the Golf R feel light on its feet and highly maneuverable, even though it weighs more than the base Golf, thanks in part to the AWD system. The electro-mechanical power steering system provides good feedback and feels nicely weighted, according to testers. In addition, it varies in steering effort depending on speed, providing a tighter, more direct feel at higher speeds and requiring less effort around town. The steering system also includes a self-centering function, which helps keep drivers headed in the right direction when the vehicle veers off-course due to high crosswinds and uneven road surfaces.

When it comes to the cabin of the base Golf, most reviewers agree it meets or beats just about anything in its class. For the R, VW made the Golf's spacious, comfortable cabin even better by adding a wide range of upscale features, many of which are available only on the R. For instance, leather upholstery comes standard on the R but remains unavailable on the base Golf, even as an optional feature. In addition, VW outfits the Golf R with a number of other R-specific features, including aluminum pedals, blue needles on the instrument gauges, aluminum trim on the dash and doors, and R logos on the sill plates and bucket seats. VW also includes a unique shift knob with an R design and a unique multifunction leather-wrapped sport steering wheel with black-gloss spokes.

In its base 2- and 4-door trims, the Golf R receives such additional standard features as Climatronic automatic dual-zone climate control, front sport seats, cruise control, a keyless remote and a Premium VIII 8-speaker audio system with a touchscreen, HD Radio, SiriusXM satellite radio, a CD/MP3 player, Bluetooth, an iPod port and an auxiliary input jack. VW also includes a multi-function trip computer with a compass and radio station display. The Sunroof and Navigation trims come equipped with a number of additional features, including a power sunroof, a navigation system with a touchscreen, push-button start and a 300-watt Dynaudio sound system.

In addition to 6 airbags, including dual front, front side and side-curtain airbags for both rows of seating, the Golf R comes equipped with such standard safety features as electronic stability control and antilock brakes with electronic brake-pressure distribution and brake assist. In addition, VW includes an Intelligent Crash Response System, which shuts off the fuel pump, unlocks the doors and turns on the hazard lights in certain types of collisions.

The vast majority of owners say the 2012 Golf R meets or exceeds their expectations. A number of owners have downsized from larger vehicles to the Golf R and are impressed with the R's spirited performance and agile handling. In addition, owners are highly complimentary about the Golf R's interior, especially when compared to competitive vehicles like the Mitsubishi Lancer Evolution GSR and the Subaru Impreza WRX STI. Owners like the cabin's fit and finish as well as its overall functionality. The Golf R accelerates quickly and smoothly, owners say, and delivers a quiet, competent ride that makes it fun to drive. Some owners would like to see slightly better fuel economy numbers, but most Golf R owners find little to complain about.

What's your take on the 2012 Volkswagen Golf R?

Have you driven a 2012 Volkswagen Golf R?
Rank This Car

Why Is This Car So High-priced