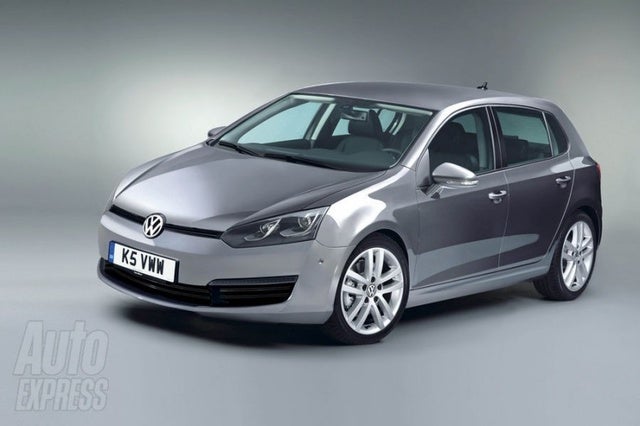 Volkswagen expands the Golf hatchback's trim lineup for 2012, offering a variety of upgraded convenience and tech features, and the Golf continues to offer a functional, upscale cabin with plenty of storage space, as well as good driving dynamics and impressive fuel economy numbers when equipped with the optional diesel engine.

Although the 2012 Volkswagen Golf comes with a price premium when compared to similarly equipped competitors, reviewers and owners don't seem to mind much, since the Golf delivers a lot of German engineering for the money. Thanks to its good performance, agile handling and overall solid build quality, the Golf behaves like a much more expensive vehicle on the road. Owners say it's not only highly capable but also fun to drive. Add in a high-mileage diesel-powered option and a comfortable interior that meets or beats just about anything else in its class, and it becomes easy to understand the Golf's wide appeal.

Nearing the end of its sixth generation, the Volkswagen Golf receives only minor updating for 2012, in the form of a revamped trim lineup, which adds new Convenience, Convenience and Sunroof, Tech, and Sunroof and Navigation Packages to the standard trims. Buyers can now choose from a total of 18 Golf trims, grouped by the type of powerplant found under the hood.

The Base trims, powered by a 2.5-liter gas engine, can be equipped with either a new Convenience Package or a new Convenience and Sunroof Package. The Convenience Package adds such features as Bluetooth and heated front seats to the standard equipment list, as well as front headlight washer nozzles, while the Convenience and Sunroof Package also includes a power tilt/slide sunroof and a premium touchscreen radio with a USB port. Buyers can similarly equip the low-emissions PZEV trims, designed for sale in certain markets, with both packages.

The high-mileage TDI trims, powered by a turbocharged direct-injection clean diesel engine, are available with either a new Tech Package or a new Sunroof and Nav Package. The Tech Package for the TDI trims adds such features as an upgraded Dynaudio audio system and remote keyless entry with push-button start, as well as LED daytime running lights, which are new for 2012, and HID adaptive headlights. As its name implies, the Sunroof and Nav Package adds a power sunroof and a touchscreen navigation system.

While the Golf continues to deliver tight, responsive handling, peppy performance and a sporty, high-quality interior, critics say the standard features list on entry-level Golf trims doesn't match those of some competitive vehicles, and also note that the Golf's better-equipped trims come at a price premium. In addition, fuel economy numbers for the gas-powered Golf trims, which achieve up to 33 mpg with a manual transmission, lag behind those of some competitors. The Honda Fit, for instance, manages up to 35 mpg, while the Ford Focus 5-Door and the Ford Fiesta hatchbacks both get up to 38 mpg (40 mpg with a special fuel economy package), and the MINI Cooper squeezes out up to 36 mpg. Other competitors for the Golf include the Mazda MAZDA3 5-Door, the Hyundai Accent GS and the Kia Rio 5-Door LX, all of which get up to 40 mpg. Of course, buyers who seek stellar fuel economy numbers can opt for Golf trims powered by the TDI diesel engine, which boosts fuel economy numbers up to 42 mpg. However, the TDI trims come with a higher price tag than the gas-powered versions. 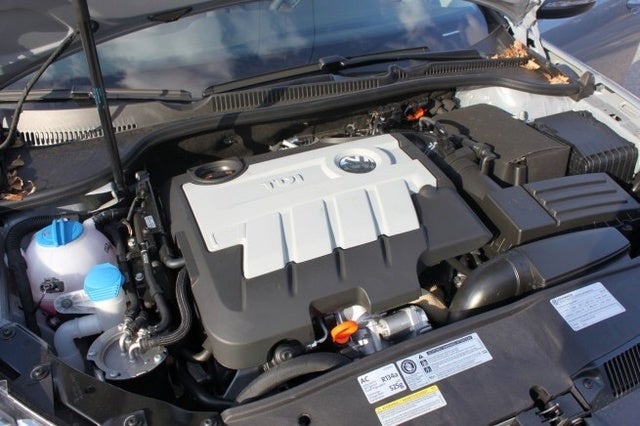 The Golf's two powerplants remain unchanged for 2012. Base power comes from a 2.5-liter inline 5-cylinder gas engine, which generates 170 hp and 177 lb-ft of torque. The engine, which features DOHC and multiport fuel injection, links to either a 5-speed manual transmission, which comes standard, or a 6-speed automatic transmission with Tiptronic manual-shift and Sport modes. Fuel economy numbers for the gas-powered Golfs check in at 23 mpg city/33 highway with the manual shifter and 24/31 with the automatic. VW also offers PZEV (Partial Zero Emissions Vehicle) versions of the gas-powered trims for sale in states with California emissions standards.

The TDI (Turbocharged Direct Injection) trims continue to receive an efficient 2.0-liter turbocharged Clean Diesel engine, which produces 140 hp and a very respectable 236 lb-ft of torque at 1,750-2,500 rpm. The TDI trims come standard with the 6-speed automatic transmission, while owners can add an optional 6-speed DSG automatic transmission with paddle shifters for manual shifting. Volkswagen does not offer the manual shifter on TDI trims. When paired with either transmission, the diesel engine posts fuel economy numbers of 30/42, although owners have reported getting mileage up into the high 40s.

Both engines deliver good performance and turn the Golf into a sport-oriented hatchback. When equipped with the base gas engine, the Golf accelerates quickly and smoothly. However, the quick acceleration eats into the fuel economy numbers. Most reviewers recommend the TDI trims, due to their strong torque and good fuel economy numbers. However, reviewers also note the diesel engine isn't as quiet as the gas powerplant during normal operation. 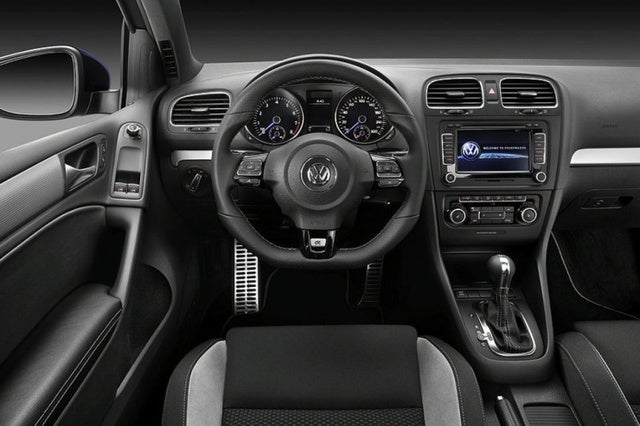 With its low, wide stance and good balance, the front-wheel-drive Golf rockets through tight corners with ease, displaying minimal body lean and agile handling. Reviewers especially like the Golf's steering, which remains almost universally praised for being responsive and controlled. The Golf features electromechanical rack-and-pinion power steering with variable assistance, so steering effort varies depending on speed and driving situations. It's firm and direct when driving hard, the automaker notes, but lighter around town or when negotiating parking lots.

All Golfs ride on an independent MacPherson strut front suspension with coil springs and an anti-roll bar, and a fully independent multilink configuration in the rear with coil springs, telescopic dampers and an anti-roll bar. Power-assisted front vented disc brakes and rear solid disc brakes provide good stopping power at all speeds, although a few testers say the brakes lack optimal feedback, and can feel a little jittery at times on wet road surfaces. The 2.5-liter gas-powered Base and PZEV trims come equipped with 15-inch steel wheels, while the TDI trims get upgraded 17-inch alloy wheels with antitheft wheel locks.

Thanks to a high level of comfort and refinement, the Golf's spacious cabin matches or exceeds just about anything else in the class. Quality materials and soft-touch surfaces give the interior a plush feel, with top-level fit and finish and plenty of attention given to small details throughout the cabin. Brushed metallic and chrome accents on the dash, door panels and center console add a sporty touch. However, some reviewers find the cabin a little sparse, especially in the entry-level trims, which come without such standard features as a center armrest and Bluetooth.

All Golf trims come equipped with such standard features as Titan Black cloth seats, air conditioning, a tilt/telescopic steering wheel, cruise control, a keyless remote and a trip computer with a compass. In addition, the Base and PZEV trims include an 8-speaker audio system with a CD player and an auxiliary input jack. The Base with Convenience Package adds a front center armrest, heated front seats and Bluetooth, while the Base with the Convenience and Sunroof Package adds a power sunroof and an 8-speaker Premium audio system with a touchscreen, a 6-CD changer, SiriusXM satellite radio and an iPod port.

All TDI trims add a number of upgrades, including a leather-wrapped multifunction steering wheel and a center armrest with a pass-through in the second row. In addition, the Premium audio system with Bluetooth, satellite radio and CD changer comes standard in the TDI trims. Owners can upgrade the TDI to include the Tech Package, which adds an upgraded Dynaudio audio system and push-button start, or the Sunroof and Navigation Package.

All Golfs come equipped with 6 airbags, including dual front, front side and side-curtain airbags for both rows of seating. Other standard safety features for the 2012 Golf include electronic stability control and antilock brakes with electronic brake-pressure distribution and hydraulic brake assist. All Golfs also include an Intelligent Crash Response System, which shuts off the fuel pump, unlocks the doors and turns on the hazard lights in certain types of collisions.

Owners overwhelmingly give their Golfs high marks, thanks in part to its performance and handling, as well as its comfortable, high-quality interior, which helps set it apart from competitors, owners note. Most realize the entry-level Golf doesn't come as well-equipped as its competitors or deliver class-leading fuel-economy numbers, but owners say it feels solid inside and out, with a high level of interior comfort and upscale detailing. To combat the Golf's mediocre fuel economy numbers, many owners have opted for the diesel-powered TDI trims, and they have no regrets about their decision. TDI owners say their cars regularly average 39-42 mpg, and can eke out fuel economy numbers into the high 40s at highway speeds. Owners also like the Golf's quick acceleration and sporty handling and call it a fun vehicle to drive.

Some owners say the optional DSG automatic transmission on TDI trims can feel jerky at times, and some wish the rear seat offered more legroom for passengers. In addition, a few owners have reported problems with the readouts on the audio and navigation systems. But overall owners say the Golf rises above its competition by offering a well-built, European-inspired vehicle that makes driving a pleasure.

What's your take on the 2012 Volkswagen Golf?

Users ranked 2012 Volkswagen Golf against other cars which they drove/owned. Each ranking was based on 9 categories. Here is the summary of top rankings.

Have you driven a 2012 Volkswagen Golf?
Rank This Car

Can I List My Car To Sell With Car Gurus?

I have a 2012 Volkswagon Golf high line , I want to list with car gurus to sell it, how can I do that?

Computer shows a Diesel filter short to ground...where would be good place to start to look for bad..loose..broken wire? Or does the fault mean something entirely different?

What Small Car Has The Best Low End Torgue

I have been driving a VW Golf w approx 180 lb feet of torgue. what other small cars have a similar torgue range at drivable RPMs, not redlining