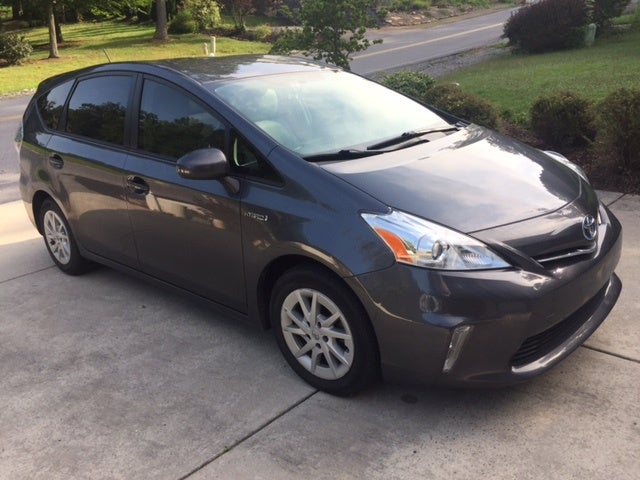 Intrusive road and wind noise, tepid acceleration, some low-end cabin materials and a gauge and instrument cluster that’ll take some getting used to might make some skip the otherwise well-wrought 2012 Prius V green machine.

Merely the mention of the Prius nameplate is enough to make fuel-frugal freaks salivate. The upsized Prius V, in its debut year, adds some serious versatility, including bulked-up cargo and passenger space to the mix. Though it’s not the quickest nor the most lavishly appointed midsize family wagon out there, the Prius V lineup offers class-leading fuel economy and enough bells and whistles to suit the average mid-distance commuter or metro-mall denizen, while the latest tweaks to the regular Prius profile and hybrid powertrain are also incorporated into this upsized offering.

Toyota offers a bigger, badder version of its legendary Prius hatchback with the just- introduced 2012 Prius V. Relying on its traditional value, the Japanese automaker adds a few extra inches to the overall dimensions of the Prius design, along with a more compact hybrid drivetrain for a practical, roomy, fuel-friendly and affordable 5-passenger family wagon. With some 60% more cargo room and extra standard features, this upsized hybrid continues to evolve and to become more apropos to the modern American lifestyle. Let there be no mistake, the “V” in this hefty hauler’s name stands for versatility, not the Roman numeral five.

Anyhow, 3 inches of added height, 6 inches of extra overall length and a mighty 1 inch in width tacked on to the regular Prius begets the new Prius V, while fuel efficiency remains in the 40+-mpg range. However, with its 232 pounds of extra weight, don’t expect this outsized Prius to be quite as efficient, powerful or nimble as its forebears. On the other hand, this once-pint-size hybrid electric vehicle (HEV) can take its place alongside most midsize crossovers in versatility, while running rings around them in gas savings.

Available in three trims, the base Prius V Two, the midlevel Three and the flagship Five, this grown-up hybrid is, as usual, offered only with front-wheel drive. With the added tweaks to its profile, the Prius V will match up style-wise with its tradition-bound Prius sibling, all the while adding class-leading fuel efficiency numbers and a marginally more sedate ride.

A few downsides (alas, there are always downsides) to this brand-new hybrid wagon include some rather boring handling attributes and acceleration that can be labeled tepid at best. A noticeable increase in engine noise on acceleration and an oddly placed, not to mention overly busy, gauge cluster will also take some getting used to.

Should these glitches prove disadvantageous, Ford’s Escape Hybrid or Toyota’s own Highlander Hybrid each offer almost the fuel savings and even more versatility than the Prius V. Chevy’s well-wrought Equinox and Honda’s refined CR-V, each a midsize crossover without hybrid efficiency, offer less in the way of fuel savings, but more utility, while the surprisingly upscale Mazda5 minivan, also a non-hybrid, offers even more cargo and passenger capacity with better-than-average mileage. 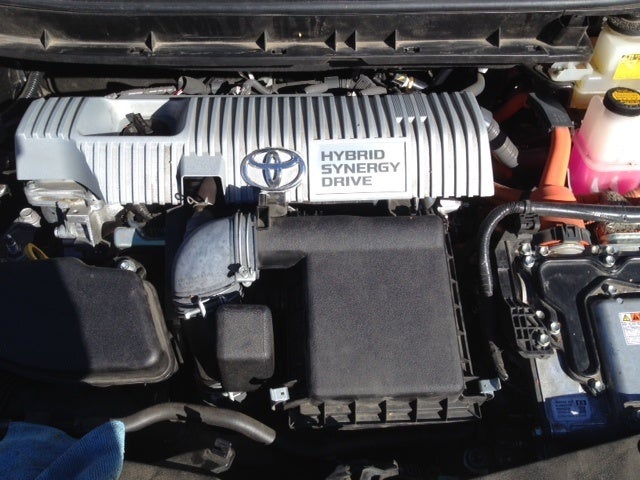 As with its traditionally sized siblings, the 2012 Prius V sports a 1.8-liter inline 4-cylinder gasoline engine that gets bolstered by a pair of liquid-cooled electric motors and remains under the management of a continuously variable transmission (CVT). This combo throws out a total of 134 hp at 5,200 rpm and 153 lb-ft of torque at 4,000 rpm, with a beefier rear axle ratio allowing a bit more torque to the front wheels for some extra torque without adding more ponies. Of course, regenerative braking helps the four-banger charge up the 650-volt nickel-metal hydride battery, while variable valve timing (VVT) and auto engine stop/start technology combine to give this outsize Prius a class-leading 44 mpg city/40 highway. In keeping with tradition, this up-sized wagon is available only with front-wheel drive.

In any case, tests found the bulked-up Prius V accelerating from 0-60 mph in a kind of pokey 10.3 seconds, lagging most of its rivals in that regard. Reviewers note that this mediocre acceleration is most obvious at the start line, but that it increases steadily through the mid- and higher ranges, with most claiming that once it gets going, this hefty hybrid wagon has no problems merging and passing on the highway.

Reviewers are also impressed with the driver-selectable modes offered in Toyota’s new hybrid wagon. The Pwr mode quickens throttle response for a sportier drive, but lowers mileage, while the Eco mode results in higher mileage but frumpier acceleration. The EV (electric only) mode, meantime, powers the Prius V up to 25 mph for short distances on electric power alone. Finally, nearly all reviewers complain that the gasoline engine can be distinctly noisy on hard acceleration, though it’s conceded that the I4 quiets nicely at highway speeds, while transition from gas to electric power and back is noted to be all but seamless.

Ride quality in this latest Toyota hybrid wagon is described by most reviewers as a bit more tolerable than in its smaller siblings, though still not exactly plush. This quasi-stately cruise is doubtless due to the added weight in this upsized hybrid, thus prompting reviewers to note that most light and moderate road imperfections are well damped, and even larger bumps are heard more than felt. Minimal wallow is noticed on the highway, according to the majority of reviews, and most point out that tire size means little to overall ride comfort.

While the vast majority of reviewers don’t consider the Prius V to be the sportiest of automobiles, many find it at least competently nimble. Several reviews note that curvy back roads are handled with a minimum of body lean and noseplow, though most regard the electric power steering as somewhat dull, albeit reasonably accurate. Virtually all reviewers agree that the Prius V Five’s larger wheels sharpen steering response to a noticeable extent.

Brakes, finally, are adequately strong and responsive, though the regenerative braking system is noted by reviewers to take some getting used to. Testing, meanwhile, resulted in an average stopping distance from 60 mph to be a lackluster 129 feet, due mainly to this hefty hybrid’s added weight taxing a system designed for the lighter Prius hatchback.

For its introductory year, the Prius V Two is delivered with a standard rear spoiler and heated power-adjustable mirrors adorning the outside, while cloth upholstery, simulated alloy dashboard and door trim, a simulated alloy steering wheel, a height-adjustable driver’s seat with power lumbar support, a fold-flat front passenger seat, remote power door locks and power windows are stashed inside. Cruise control, telescoping tilt-wheel steering, a trip computer with an added hybrid performance display and a rear-view camera are among the standard convenience features, along with climate control and Bluetooth hands-free calling. A single-CD player, meanwhile, boasts 6 speakers and is bolstered by auxiliary iPod integration and a USB port.

Options for all trims include front and rear floor mats and cargo organizers in the Preferred Accessories Package, as well as remote engine start and Toyota’s VIP Plus security system. The Prius V Five can additionally be delivered with an available Advanced Technology Package that flaunts an upgraded navigation system with a 7.0-inch touchscreen, as well as upgraded audio with 8 premium speakers, a power sunroof, adaptive cruise control and auto-assist parallel parking.

Many reviewers reluctantly point out that hard plastics dominate this midsize hybrid wagon’s interior, while a number also complain that the ultra-busy center-dash-mounted gauge and instrument cluster can be distracting. According to reviewers, the plastic steering wheel, though designed to appear high-end, merely looks tacky, and rear-seat legroom is at a premium for average-size adults.

On the positive side, reviewers concede that this hybrid wagon’s interior offers a pleasant atmosphere, long-haul-comfortable front seating, even for larger folks, and some generous passenger and cargo room. With its upsize dimensions, the Prius V flaunts 67.3 cubic feet of cargo space with the rear seatbacks folded and over 34 cubic feet of cargo space available behind the upright second-row seats.

The Insurance Institute for Highway Safety (IIHS) gives this midsize hybrid wagon its best score of Good in front and side crash protection testing, as well as in roof strength and seat/head restraint geometry.

Some low-rent cabin materials disappoint a number of Prius V owners, as do its somewhat small doors, which inhibit easy entry and exit for average-size adults. A few owners complain of issues with build quality, while a number also consider the available HDD navigation system to be a bit outmoded. Finally, many owners wish for a few more horses to be added to the hybrid drivetrain, while several others find engine, road and wind noise a bit intrusive at highway speeds.

An overwhelming majority of owners, however, are willing to overlook any perceived glitches in this well-wrought and sizeable hybrid wagon when they note its hefty fuel savings. The plethora of standard features, especially in the higher trims, impresses more than a few owners, while passenger and cargo space, not to mention the easy-loading cargo bay, also come in for their share of owner kudos. Finally, a number of owners are impressed with the Prius V’s ride quality, while others find handling capabilities to be at least adequate in normal driving situations.

TheHorror The V has the exact same drivetrain as the regular Prius; it is EXACTLY as powerful as the smaller model. It is slower as a result of greater weight. But what you wrote is patently false. You messed up again, Tallberg!

doanejr18 We bought a 2012 Toyota Prius V two, as we were looking for quality as well as fuel economy as my wife need a more economical car. Top Gear Motorsports in Pensacola, Florida had the exact car we were looking for and would go back to buy from them again.

Have you driven a 2012 Toyota Prius v?
Rank This Car

Noise After Changing A Tire

I had to change my front passenger tire today, when I was done I tried to drive it but it was making rubbing noise I drove it about 10 ft what's wrong

When Driving My Car The Engine Sounds Like It Is Revving High To Eliminate ...

How Many Owners Does The Car Actually Have ?

Hi. The sellers car is showing as having three owners on CarGurus however their car fax says that the car has only had 2 previous owners. Can you help me understand what actual amount of owners or h...

After trying to start the car last night, would not start, the whole dashboard lit. Strange it is exactly 50,000. Any suggestions on what the issue might be.

Have a 2012 Pruis V that is burning over a quart of oil every 1,000 after doing a oil consumption test at Dealer Have 130,000 miles and being told Toyota probably won't fix. I now they covered pr...