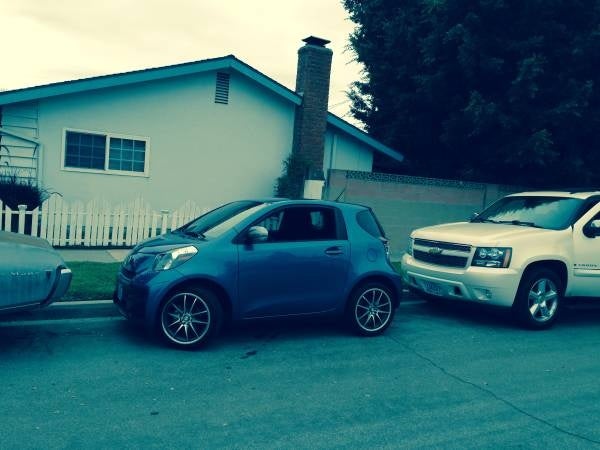 Skirting the line between microcar and subcompact, the Scion iQ mini compact made its debut in United States auto dealership showrooms in December of 2011. Branded as a Toyota iQ outside the U.S. (Toyota Motor Corporation is the parent company of Scion), the 2012 Scion iQ has room for 4 passengers (although the passenger's knee space is so limited that Scion itself refers to the car as a 3-1/2-passenger vehicle) and makes for a good city car, especially if you need to park on busy streets.

The Scion iQ is available in a single Base trim, which is front-wheel drive, runs on premium gasoline and is equipped with a 6-speed automatic transmission. The iQ is fitted with a 1.3-liter 16-valve DOHC 4-cylinder engine that reaches 94 hp and 89 lb-ft of torque. The EPA estimates that the iQ will get 36 mpg city/37 highway.

Competing against the likes of the Smart Fortwo (which lacks a back seat) and Fiat 500, the 2-door hatchback Scion IQ went on sale in the western region of the U.S. in December 2011, with sales expected to begin in the southern, midwest and northern regions during the first quarter of 2012. With a competitive price point, ample power for its size and a decent amount of standard options, the mini compact market just got a little more competitive.

GuruWBN1X Mine's a 2012 purchased with 61K. Feels like new. Absolutely a "Hoot" to drive. Turns on a Dime. Parks anywhere. Easiest car ever had for entry and exit. Tight and quick steering .Drives like a bigger car with no sensation of small size. No short wheel base side effects. Stays with traffic. Stable over 80 mes per hour. Equal to or better than rated MPG.

Users ranked 2012 Scion iQ against other cars which they drove/owned. Each ranking was based on 9 categories. Here is the summary of top rankings.

Hi! Recently my friend bought small city car Toyota (Scion) IQ 1.0 petrol 68hp manual 2012 50k miles on it. I was doing her a favor and changed oil and filters on car. I have noticed that old oil ...

Just wondering if you have to test drive before you purchase your vechial ?

32 views with 3 answers (last answer about a year ago)

Where Is The Alternator Located On A 2012 Scion IQ

I ordered a replacement alternator for my 2012 Scion iQ and wanted to familiarize myself before I jump into it. How do you access the alternator on this particular make and model?

How Do I Sell My Car?

I received a good bid for my car and accepted it but I never previously sold a car on CarGurus. What is the next procedure?

Will The I-pod Music Menu Appear On The Navigation Screen When Connected To...