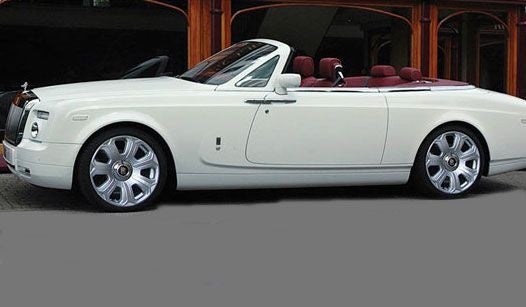 The 2012 Rolls-Royce Phantom Coupe looks like a vehicle that could belong to the star of an action-packed spy film. With all the luxury, special features and gadgets this vehicle has, you can feel like a star as well. The exterior features a mirror finish in a multitude of colors to appeal to anyone that can afford it. It is a symbol of 107 years of automotive excellence. Open the unique back-hinged door and you will find a wood and leather interior that is second to none, with all the gadgets and controls to appease a spy, or anyone else. Since its debut in 2009, there have been no major changes or updates. As with all Rolls-Royce vehicles, bespoke customization is available, allowing the customer to have the vehicle built with any and every option he or she may want.

Under the hood of the 2012 Rolls-Royce Phantom Coupe is a 453-hp V12 direct-injected engine with 531 lb-ft of torque at 3,500 rpm. This beast of an engine has the capability to launch this almost-6,000-pound vehicle from 0-60 mph in 5.7 seconds. The governed top speed of this vehicle is 149 mph. To go with all this power is a 6-speed manual transmission, giving you the control that a sports coupe calls for. Of course, there is a price to pay in fuel economy with all this power. EPA estimated fuel economy for the 2012 Rolls-Royce Phantom Coupe is 11 mpg city/18 highway. However, if you are lucky enough to own one of these regal vehicles, chances are its gas mileage is one of the least of your concerns.

A ride in the 2012 Rolls-Royce Phantom Coupe is more like cruising in a yacht on calm water than being in an almost-3-ton vehicle on the road. It is equipped with 4-corner auto-leveling with a front double wishbone and rear multi-link suspension. In addition to the firm suspension are front and rear anti-roll bars. The air-loaded front springs and gas-pressured rear springs and shocks, as well as automatic ride control, also contribute to the smooth, comfortable ride of this vehicle. The 2012 Rolls-Royce Phantom Coupe reads the road and adapts to any road conditions it encounters, making the ride smooth no matter how rough the road is. It comes standard with 21-inch alloy wheels and all-season run-flat 255/50/21 front tires and 285/45/21 rear tires.

The handcrafted interior of the 2012 Rolls-Royce Phantom Coupe is one of a kind, the woodwork alone requiring 18 days to finish. Open the back-hinged door and you will find the luxurious leather interior and hand-tooled woodwork only Rolls Royce can provide. New for 2012 is an 8.8-inch widescreen display as well as an iDrive controller, which gives you fingertip access to the upgraded satellite navigation system with a 3D display, as well as your choice of eight other frequently used features. Bespoke customization, which is a British term that means the buyer can customize the vehicle to his or her exact specifications, is also available. One issue reported with the interior is a roof-mounted instrument cluster that is not clearly visible from the driver’s seat.

Safety in the 2012 Rolls-Royce Phantom Coupe is as important as elegance and luxury. Four-wheel ABS and driveline traction control, as well as vented 4-wheel disc brakes, provide stopping power for these large vehicles with safety and ease. It is also equipped with front, rear- and top-view cameras for safe backing and parking. The vehicle is also equipped with driver's and passenger airbags, side impact airbags as well as curtain overhead airbags, front and rear.

What's your take on the 2012 Rolls-Royce Phantom Coupe?

Have you driven a 2012 Rolls-Royce Phantom Coupe?
Rank This Car