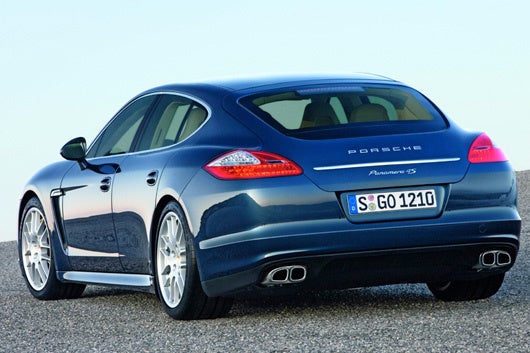 Looking for a Used Panamera Hybrid in your area?

I’d like to travel back in time and tell my 10-year-old self that someday Porsche will have both an SUV and a 4-door sedan in its stable, perverting my young vision of performance purity. Ten-year-old me would likely recoil, refusing to believe the prognostications of the old man just arrived from the future. Time travel would be an easier pill to swallow than the future betrayal Porsche had in store.

But apparently I’m alone. The Panamera sedan has surpassed the Cayenne SUV as the most popular Porsche in the States, and the perversion continues to permeate, as a hybrid version of the Panamera debuts this year.

Let’s get this out of the way early—the Panamera is ugly. We’ve heard it over and over again, and they’re right. The proportions are wrong, the profile obscene. Now let’s move on.

Aesthetics aside, the Panamera is a hell of a car. It’s fast, it’s comfortable, and it can handle—especially with the V6 as opposed to the heavier V8. That’s good news for the S Hybrid, which starts with the supercharged, direct-injected 3.0-liter V6 and pairs it with a 35kW electric motor and 8-speed automatic transmission. It’s the same setup we’ve seen in the Cayenne and Touareg hybrids, using the 333-hp Audi V6 that does duty in the S4, S5, A6 and Q7. Mated to the 47-hp electric motor, that puts total output at 380 hp—good enough to push the Panamera S Hybrid to 60 mph in 5.7 seconds, a full second slower than the conventional Panamera S.

Some will bristle therefore at the inclusion of the “S” badge with the Hybrid, as its performance is about even with the base Panamera. Guess the “S” doesn’t stand for sport. More likely, it’s an attempt to build up the perceived value of the S Hybrid, which comes with some extra features like a power liftgate, rain-sensing wipers, rear-park assist and navigation. However, the big addition is the adaptive air suspension, which adds thousands and thousands of dollars to the price of other Panameras. Smart money says it’ll be just as important a feature as the hybrid badges for attracting consumers.

I say badges rather than technology because the Panamera S Hybrid isn’t going to do much to actually save the environment. EPA estimates of 22 mpg city/30 highway may be impressive when compared to the rest of the Panamera lineup, but they won't win any awards. Still, the Panamera S Hybrid can drive up to a mile and a half on electric power only up to about 50 mph, thanks to its 1.7-kW/hr NiMH battery. Another neat trick is to shut off the gasoline engine and coast on electric power up to 103 mph—although Porsche decided a more elegant term than “coasting” was needed and elected to call it “sailing” instead.

Fancy tech aside, it’s really hard to push the Panamera S Hybrid as an economical option for the ecologically minded. Money is a resource as well, and no amount of fuel savings will mitigate the initial cost of the Panamera—unless you’re planning on driving it for several centuries. So much research and design and manufacturing just to produce a vehicle that is slower and less efficient than a V6 Mustang, and for three times the price. Even a 10-year-old knows that doesn't make any sense.

What's your take on the 2012 Porsche Panamera Hybrid?

Have you driven a 2012 Porsche Panamera Hybrid?
Rank This Car

Looking for a Used Panamera Hybrid in your area?