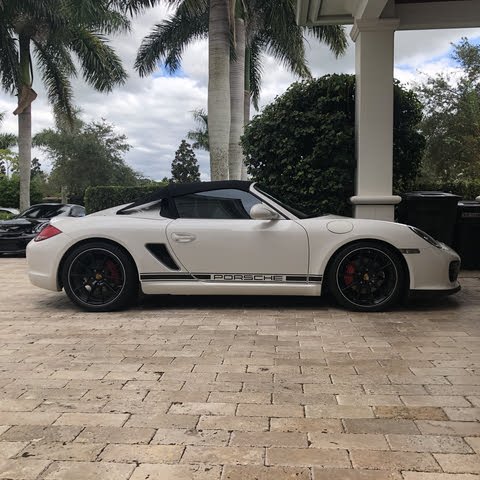 The darkness in Deutschland continues to spread, as the Boxster gets a new S Black trim this year, following a path already trod by the 911 and the Cayman. Little else changes for this rear-wheel-drive, midengine roadster in 2012, but the new trim may just be enough to keep people interested in the “beginner's Porsche.”

The Boxster gets second-fiddle treatment to its hard-topped brother the Cayman. Thankfully, this comes in the form of a symbolic neutering—10 hp taken off for all three trims compared to their Cayman equivalents. Sure, things will be slower in the drop-top Boxster than in its more rigid stablemate, but that’s a welcome admission price for the best-handling roadster on the market. Even in Base trim the Boxster can motivate, despite only throttling 255 horses from its 2.9-liter boxer-6. Besides, 255 hp is plenty in a car weighing less than 3,000 pounds. What’s more troubling is its 214 lb-ft of torque, which certainly isn’t low, but it’s low enough to get eyes wandering toward the 3.4-liter engine in the remaining trims.

For the S, that means a very respectable 310-hp and 266 lb-ft of torque showing up at 6,400 and 4,400 rpm, respectively. Both can be felt, but the torque makes a big difference landing right in the meaty part of the curve. While the Base trim sports 17-inch alloys, the S gets a bump up to 18-inch units, which improve grip without hurting the ride. A 6-speed manual is standard for all Boxsters, but the 7-speed PDK automated manual is an option, and a good one if you hate having to choose between three pedals.

Unfortunately, the larger engine and wheels are the only real upgrades for the S. Thankfully the Boxster already comes with a well-sorted suspension and brakes that would stop a telethon. But if you’re looking to really up performance, your only option until now was the Spyder—a stripped version of the S with no radio, no air conditioning and a suspension that will shave a few inches off your height by compressing spinal cartilage.

That singular option is no longer the case. The new S Black trim offers the stronger Spyder engine, the lightweight 19-inch wheels from the Spyder and an all-black color treatment for the body, top, wheels, air intakes and exhaust, and most of the interior. Even the trim is blacked out here. Moreover, it takes the S trim and adds amenities like automatic climate control, a Bose stereo with satellite radio, navigation and more for several thousand dollars less than it would cost to equip an S in the same manner. It’s the least exclusive of the three 2012 Black editions, with 987 units produced.

They may seem small concessions for a special edition, but the Boxster has always been criticized for a certain lack of amenities most would consider expected for a luxury sports car. The Base trim is no stripper for sure, with heated power mirrors, a power top, iPod interface and Bluetooth, but where’s the power for the seats, the premium stereo, the dual-zone climate controls? And vinyl in a Porsche?

Sure, a sport exhaust and carbon-ceramic brakes are expected options, but how about a standard limited-slip differential? That’s as much a safety as a performance feature and shouldn’t be relegated to the options list. The fact that full power, leather, heat and ventilation are available for the seats, but only as options, is a bit insulting—a way to lower the entry cost of the entry Porsche without actually lowering the cost. Same can be said about the windblocker—an essential in any luxury convertible.

Of course, nearly any option you could want is available, but beware—checking those boxes on the options list will rocket the Boxster out of “entry-level” just as quickly as this little roadster can sprint to 60. The PDK transmission coupled with carbon-ceramic brakes will easily add 10 grand to the price of admission, and adding just the navigation system is another easy 4 thousand dollars with the required Bose stereo upgrade.

Porsche Active Suspension Management is another story, adding an adaptive suspension with multiple settings. If your driving style varies widely from casual to competitive, it’s a worthwhile option for 2 thousand dollars, especially on trims with the 19-inch wheels, which can impart a bit of rigidity to the ride.

Dark days mean fun times for Porsche, and the S Black edition is the best Boxster trim to come out of Stuggart since the Spyder. What’s better, the S Black can be enjoyed by everyone, not just those looking for a stripped, slinky track trouncer. Sadly, all the S Blacks have been spoken for already, so expect to pay a premium if one can even still be found. Better yet, write yourself a note and look out in the secondary market in about ten years, when most will have forgotten about this best of the Boxsters.

What's your take on the 2012 Porsche Boxster?

Have you driven a 2012 Porsche Boxster?
Rank This Car

How To Exectute Tre Transaction

Hello, I've purchased a 2012 Porsche Boxster Base a couple months ago; 27K miles. Initially, the ignition system started the engine from the first time I turned the key. Recently, I've noticed that ...

How Come You Can't Search Nationwide For A Car On CarGurus, It Only Allows ...

is S in Porsche boxster stand for spyder? how is the inventory of boxster in Az? EAST COAST IS A MAJOR ISSUE TO ME DUE TO THE FLOODING.