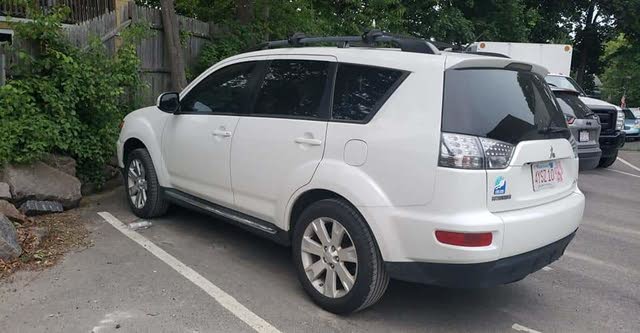 Continuing the climb from its 2007 second-generation debut, in which it gained third-row seating, the Mitsubishi Outlander keeps on evolving as it heads into 2012. After the 2010 refresh, Mitsubishi tweaked its fuel economy and shuffled around some features for a better value. For 2012 the Outlander loses its second-priciest trim, the XLS, while adding in a couple handy gadgets for the price- and pedestrian-conscious driver.

Newly standard for 2012 is an Eco indicator to encourage good driving habits. An auto-dimming rear-view joins the Premium package options list, while the display for the optional rear-view camera has been integrated with the rear-view mirror. Although these changes likely won't draw a significant fanfare to this clover looked over so many times before, that could change if driver sentiment continues on its currently impeccable track, though some drivers are quite pleased to have an uncommon crossover with so much to love.

Is it some conspiracy? The magazines are all up in arms about the flimsy and tight third row, but drivers could care less about that. Nearly every owner instead prefers to focus on the Outlander's graceful road manners, head-turning looks, ample performance and endless functionality at such an affordable price. While the glossies nit-pick the Outlander's classically styled interior, drivers find more cubbies than they can fill between the two large gloveboxes and rear under-floor compartment. Whatever the reason, the fact there are so few Outlanders on the road is a selling point for many owners today.

Some had reservations about buying a 4-cylinder crossover, but owners of the base ES and midlevel SE praise the Outlander's spirited feel despite the 2.4-liter's seemingly anemic performance on paper, pushing out just 168 hp and 167 lb-ft of torque. The standard continuously variable transmission (CVT) with paddle shifters in these two trims keeps it all moving smoothly, pushing power to the front wheels by default, with all-wheel drive available for the SE and top-shelf GT only. The GT gets a 3-liter V6 good for 230 hp and 215 lb-ft of torque and hits 60 mph in 7.9 seconds with the help of its 6-speed automatic and paddle shifters.

Opting for AWD with the V6 will net the worst fuel economy of the lineup, coming in at 19 mpg city/25 highway, which is pretty respectable for such a fun ride. At best, the 4-banger driving only 2 wheels fetches 23/28, and AWD shaves just 1 mile off the efficiency of each engine. The AWD system offers selectable modes depending on the conditions, and the GT's edition is expectedly improved with additional modes and an upgraded front differential.

Despite its affordable sticker, feature content for the Outlander runs the expected gamut for its class all the way up to a rear entertainment system, rear parking sensors, remote engine start, hard-drive-based navigation system with real-time traffic and digital music storage or Mitsubishi's Fuse hands-free system, if you so wish. The base ES comes standard with features like roof rails, cruise control, remote keyless entry, a leather-wrapped multifunction steering wheel and reclining rear seats, while the SE notably adds 18-inch alloy wheels, turn-signal mirrors, keyless ignition, a 6-CD changer, sliding second-row seats and capacity for 8 with the addition of a third row. The GT adds automatic xenon headlights, automatic wipers, automatic climate control and an upgraded interior alongside the expected sport-tuned enhancements.

With a nearly impervious track record and driver acclaim as strong as it is, the 2012 Outlander is poised for stardom - but will it go the distance all the way to your heart? Perhaps only a test drive will tell!

What's your take on the 2012 Mitsubishi Outlander?

Have you driven a 2012 Mitsubishi Outlander?
Rank This Car

Car sat in garage for 1.5 weeks. Now won't start. Clicks when turn key but won't turn over. ASC and 4WD service required lights on now. All garages closed because of the virus.

94 views with 2 answers (last answer about a year ago)

Mechanic replaced camshaft positioning sensor. The other one is ok. He can't find anything else mechanically wrong but the service engine light keeps coming back on

How Do Reset The Maintainence Indicator On My 2012 Oulander Sport?

I’ve had the car for almost 2 year, shortly after I bought it I noticed the rpms surging and decreasing while driving. I let warranty shop know they said it’s running as it should. Couple months ...

Hello, I recently saw a vehicle on your website. I contacted Bob Mills Mitsubishi, Jacksonville, NC to inquire about the vehicle. I went in later that day and could no longer find the listing. When...