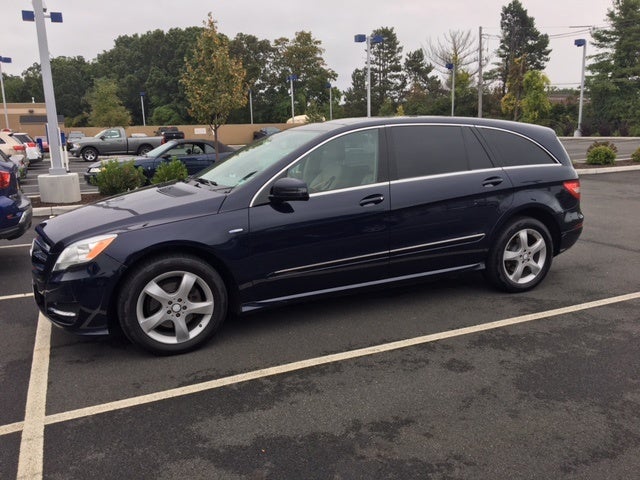 The 2012 Mercedes-Benz R-Class brings to mind a classic Steve Martin and Bill Murray Saturday Night Live skit, circa 1979: “What the hell is that thing?” Martin and Murray say over and over again, with emphasis on different words in the sentence, as they stare at an intriguing item just past the camera lens.

Now, to be fair, the bottom line with the R-Class is it’s yet another classy Mercedes-Benz with much going for it in the way of performance and comfort.

The point is it’s a little hard to define the style and looks of the 2012 Mercedes-Benz R-Class. Many feel the 6-seater, which can be arranged to carry 7, functions more like a luxurious minivan than a sports utility vehicle. That’s a good thing, given its roominess and usefulness. But the vehicle looks a little too much like a minivan, too, and that’s generally not such a good thing in the eyes of the buying public.

Ironically, in trying to ease the R-Class away from that minivan comparison, Mercedes took a hit from reviewers when it set the car up with doors that swing open rather than those that slide. The problem is, these are big doors, and they can be problematic in a parking lot.

Still, if buyers can get beyond the “cool” factor and come to grips with driving what may at times catch eyes in a “What the hell is that thing?” manner—and they don’t have much in the way of budget constraints—they can put themselves into a quite impressive machine, a rig that the automaker refers to as a crossover and one that in many ways lives up to the lofty status of the Mercedes nameplate.

Changes for the 2012 Mercedes-Benz R-Class are few following an update for 2011, but one of them ranks as fairly significant. Engines differentiate the two R-Class trims, and the R350 4Matic gets an upgraded gasoline-powered V6. That 3.5-liter unit now gets 302 horsepower with 273 lb-ft of torque. Previously, most reviewers were quick to recommend the turbocharged 3.0-liter V6 diesel in the R350 BlueTEC 4Matic that is good for 210 hp and 400 lb-ft of torque. The changes even the playing field a bit and make the choice a little more difficult.

Both trims come with a 7-speed automatic transmission and 4Matic, the standard all-wheel drive (AWD) from Mercedes. The gas-powered engine carries EPA-estimated fuel economy numbers of 16 mpg city/21 highway and the diesel checks in at 18/23.

The 2012 Mercedes Benz R-Class is a big rig, and that helps it offer a smooth and comfortable ride, but the size can also make it a bit tough to maneuver in tight spots and getting around town.

The R-Class scores well with reviewers for its classy, well-equipped and well-constructed cabin, set up with an 8-way power driver’s seat, premium vinyl upholstery, Bluetooth phone connectivity, an 8-speaker sound system with 6-CD changer and other goodies. Some do take issue, though, with the older and less-than-convenient controls on its COMAND navigation system.

A Premium 1 package includes a rear-view camera, power liftgate, auto-dimming exterior and interior mirrors and other features. The Premium 2 adds to that with keyless ignition/entry and an 11-speaker Harman Kardon surround-sound audio setup.

The 2012 Mercedes Benz R-Class offers stability and traction control, antilock brakes and a full array of airbags. It also has PreSafe, a Mercedes product with the ability to detect conditions that suggest a crash or rollover is imminent. In that case, it adjusts the front seatbelts and can close windows and the sunroof to prepare for a collision. The R-Class scores well in Insurance Institute for Highway Safety front and side impact tests.

What's your take on the 2012 Mercedes-Benz R-Class?

Have you driven a 2012 Mercedes-Benz R-Class?
Rank This Car

Can't Select And Save My Search For The Future.

I love your site; found my last car through it 9 years ago. Since I cleared my browser data two days ago, nothing has been the same. It was so convenient to have an advanced search saved. Now it s...