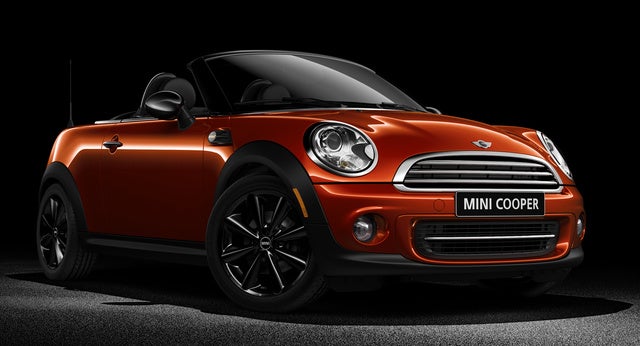 BMW listens. When people complained there wasn’t enough space in the backseat of the resurrected MINI, the Bavarian automaker went to work. Sure, it would have been easier and simpler to just increase space for rear passengers, but that’s no fun. Instead, two new models were created for the MINI – a 4-door Countryman with plenty of rear room and a 2-seat Roadster with none at all.

Of course, that’s not completely true. We got to the Roadster by way of the Coupe, which is merely a hardtop version of the same vehicle. It’s comical to talk about a trimmed and truncated version of the already-svelte MINI, but that’s just what we have here. The Roadster is 12.25 feet long with an 8-foot wheelbase, and it sits 20mm lower than its MINI Convertible stablemate. You’ll get no rear seat, but rather a parcel shelf with a pass-through to the 8.5-cubic-foot trunk, and while powertrains are the familiar options available to all MINI offerings, the Roadster offers some interesting additions down below.

Just like the Coupe, the Roadster gets extra rear bracing and reinforced rocker panels to keep things stiff while pressing the limits of its MacPherson strut front and multi-link rear suspension. In fact, keeping the rear planted seems to have been a concern. The Roadster is also fitted with an automatic rear spoiler that deploys above 50 mph for a claimed addition of nearly 90 pounds of downforce.

No one claims the MINI can’t handle, but BMW is calling the Roadster the fastest MINI ever, especially in S and John Cooper Works (JCW) trims. The base Roadster starts with the familiar 1.6-liter inline 4-cylinder engine. At 121 hp and 114 lb-ft of torque, don’t expect acceleration-induced screams from your passengers, but since the Roadster weighs only about 2,700 pounds, it’s still quite zippy. The S turbocharges that same engine for 181 hp and 177 lb-ft of torque. Sixty extra horses and over 60 lb-ft of torque blended in make a big difference in this little guy, but if you want to make sure you’re the fastest novelty on the road, the JCW offers 208 hp and 192 lb-ft of torque. An overboost option will even push the torque numbers up to 207 - however briefly - long enough to make a run to 60 in just over 6 seconds.

But the top is the big news here, and despite MINI’s attempts to position itself as a luxury compact, you’re dealing with a manual-folding soft top. Luckily, it’s a really great one. True one-hand operation both up and down means you can change your mind without having to pull over. Yes, the top can be operated easily while driving, and you don’t need to choose an automatic transmission to do it. A button push followed by a full arm rotation collapses the canvas canopy behind the driver in one motion - faster than you'd think - and it doesn’t intrude on trunk space either.

No, the Roadster isn’t the most practical MINI offered. BMW even admits as much. But it just might be the most fun, or at least BMW hopes so. As MINI continues to fracture and evolve into an ever-increasing trim and model lineup, fans have worried about a perversion of purpose that often accompanies such attempts to coddle every concern and address every angle. If the Roadster is any indication of how MINI will obviate such obvious pitfalls, methinks there’s little reason for worry.

Have you driven a 2012 MINI Roadster?
Rank This Car

I Have A Slight Misfire On My Mini Roadster. It Only Happens When Accelerat...

Can These Mini, Be Moved To Savannah GA And How Much If Possible ?