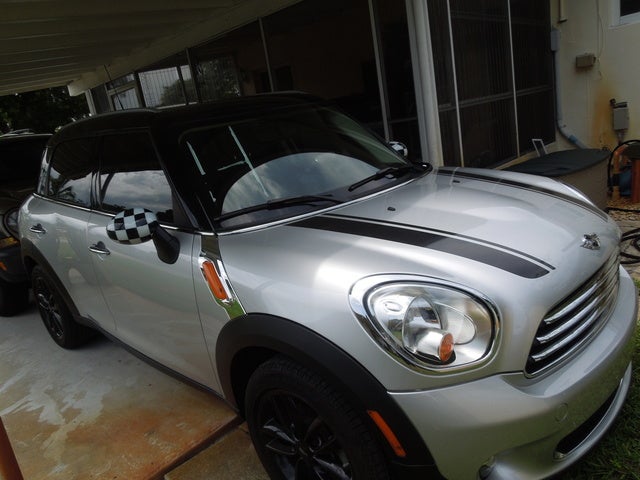 Entering its second year of production, the 4-door, 4-passenger 2012 MINI Countryman, which has a lengthy options list, made no major changes to its configuration for this year, with only a couple of minor option additions, such as changes to the steering wheel cover and tweaks to the wheels and upholstery.

The three trim levels for the 2012 MINI Countryman are the Base, S and S ALL4, all of which come with a standard 1.6 liter 16-valve DOHC 4-cylinder aluminum-alloy premium gasoline engine, which is turbocharged in the S trim levels. The standard engine achieves 121 hp and 114 lb-ft of torque, while the turbocharged powertrain reaches 181 hp and 177 lb-ft of torque. All trims come equipped with a 6-speed manual Getrag transmission with overdrive (which is upgradeable to an Aisin 6-speed automatic transmission). The Base and S trims are front-wheel drive (FWD), and the S ALL4 is all-wheel drive (AWD).

The Base Countryman has a number of standard features, including air conditioning, cruise control, tilt-and-telescoping leather-wrapped steering wheel (with audio and cruise controls), leatherette upholstery, height-adjustable driver’s seat, rear bucket seats or bench seat, roof rails, trip computer, 6-speaker sound system with an AM/FM/HD radio with a CD player and MP3 capability, Sirius XM satellite radio (with a 1-year subscription to the Sirius Select package), auxiliary audio jack and 17-inch 5-spoke or tunnel-spoke alloy wheels (with performance run-flat or all-season tires), which can also be had with a black finish. The Countryman S trims add sport seats and fog lamps as standard equipment.

Given that the 2012 MINI Countryman is equipped in a similar fashion as the lighter MINI Cooper 2-door hatchback, it should not be that surprising to find that owners, while reveling in the extra space that the Countryman provides as well as its customizable options, are not as enamored with its handling, which is described as sluggish, plodding and just plain slow. The AWD Countryman gets slightly better reviews for shifting and handling, but still places it behind similar compact crossovers such as the Hyundai Tucson and Kia Soul.

What's your take on the 2012 MINI Countryman?

Aprill I owned a Countryman S for 6 years, after owning a Mini convertible for 5 years. I have also bought a Mini each for two of my daughters. They have all been excellent, reliable cars, both fun to drive and economical. In 6 years of owning my Countryman no problems whatsoever. Only sold it when I really had to. Heavy duty well built cars. Don't fall apart and start squeaking in a year or 2. Mine drives and rides like brand new after 6 years. Can't go wrong.

Users ranked 2012 MINI Countryman against other cars which they drove/owned. Each ranking was based on 9 categories. Here is the summary of top rankings.

Have you driven a 2012 MINI Countryman?
Rank This Car

I Have A Glove Trapped In My Rear Hatch Of My Countryman...can't Get The Gl...

Key Fob Can Not Be Removed From Ignition

My wife’s 2012 Mini has been showing the check engine light. I changed the two cam shaft sensors and it did it again then went off. Then it came on again. I disconnected the battery and it reset an...

About 2 months ago my husband and I bought a Mini, it has 64000 miles and drove beautifully on the way home. Two weeks later the check engine light came on while I was driving, flashing yellow on t...

How Do I Get An Offer From Cargurus

Can you make me an offer?