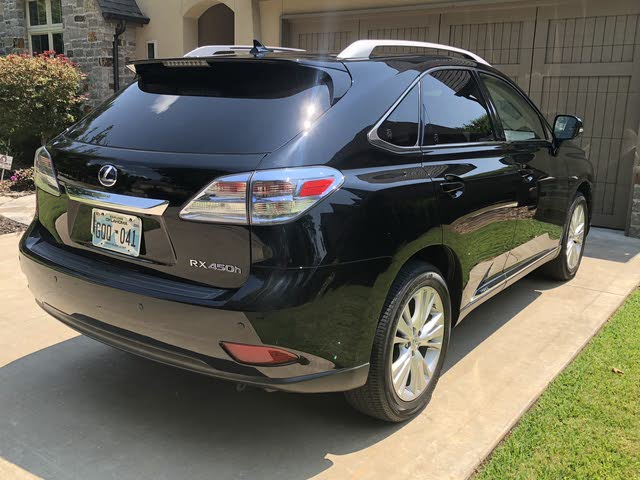 With its comfortable ride, well-equipped interior and good fuel economy numbers, thanks to its smooth, capable hybrid powerplant, the 2012 Lexus 450h continues to hold onto its position as one of the world's top upscale hybrid crossover SUVs.

The 2012 Lexus RX 450h remains one of the top upscale hybrid crossover vehicles available today, and although it receives a few dings from some owners when it comes to fuel economy and seating comfort, it largely meets owners' expectations. Since its debut, however, a number of competitive gas-powered luxury crossover vehicles have entered the market and are nipping at the RX 450h's heels in terms of fuel economy. Prospective buyers should consider their options and crunch the numbers to determine whether some competitive gas-powered crossover vehicles might offer a better overall value.

One of 5 hybrid vehicles currently offered by Lexus, the RX 450h hybrid luxury crossover SUV rolls into 2012 essentially unchanged from the previous year. When it debuted in 2006, the RX 450h became the first upscale hybrid crossover SUV on the market and has since enjoyed strong sales and maintained its position as a class leader, for a number of reasons. It continues to deliver the interior amenities and comfort of a luxury vehicle, the functionality of an SUV, the ride and handling of a premium sedan and the fuel economy of a hybrid. While some owners claim the RX 450h doesn't always deliver promised fuel economy numbers, it nevertheless manages up to 32 mpg, according to EPA estimates. Add in a relatively affordable price when compared to some competitors, and the RX 450h excels on a number of fronts.

Lexus again offers the 2012 RX 450h in front-wheel-drive (FWD) Base and All-Wheel Drive (AWD) trims. Power continues to come from a Lexus Hybrid Drive system, which was revised in 2010. The 5-door, 5-passenger RX receives a new Nebula Gray Pearl exterior color as its only update for 2012.

Outside, the RX 450h retains its athletic exterior styling, with a rounded nose, aerodynamic lines, subtly concave sides, pronounced fender flares and sweptback roofline. Up front, the RX 450h displays a unique silver grille and front bumper, which help distinguish it from the gas-powered RX 350, on which it's based. Other standard exterior features include a shark-fin antenna, side mirrors with integrated LED turn signals and a rear spoiler, which helps lower the vehicle's coefficient of drag. Roof rails come standard on the AWD trim, and owners can add optional LED highlights, again with a design exclusive to the RX 450h.

The RX 450h's only true competitors in its midsize upscale hybrid crossover SUV class are the Porsche Cayenne S Hybrid and its cousin, the Volkswagen Touareg Hybrid. Fuel economy numbers for both vehicles top out at around 24 mpg, and both have considerably higher price tags than the RX 450h. So does the full-size Cadillac Escalade Hybrid, which trumps the RX 450h as far as passenger and cargo space, but similarly costs quite a bit more than the RX 450h. Prospective buyers might want to consider a number of gas-powered upscale midsize crossovers, such as the BMW X3 or the Audi Q5, both of which achieve up to 28 mpg.

The RX 450h's Hybrid Drive system remains unchanged from the previous year. It combines a 3.5-liter Atkinson-cycle V6 engine with 2 electric motors (3 in the AWD trim) and a compact 288-volt nickel metal hydride (Ni-MH) battery pack, located under the rear seat. The RX 450h can operate in electric-only and gas-engine-only modes, as well as in a combined gas and electric mode. Working alone, the V6 engine produces 245 hp and 234 lb-ft of torque, but when the electric motors kick in, total horsepower jumps to 295. One electric motor starts the engine and recharges the battery pack, while a second drives the front wheels. In AWD trims, a third electric motor drives the rear wheels.

The hybrid system also includes an electronically controlled continuously variable transmission with intelligence (ECVT-i), which features Snow and manual-shift Sequential modes. Fuel economy numbers check in at 32 mpg city/28 highway for FWD trims and 30/28 for AWD trims. The hybrid system achieves higher fuel economy numbers in the city because its shuts off when the vehicle stops or idles. In addition, the RX 450h can travel for short distances at lower speeds on electric power alone.

The available part-time AWD system adjusts torque to each wheel for optimal traction in all types of road and driving conditions. In normal driving situations the system sends power only the front wheels to help improve fuel efficiency, but when it detects slippage, it redirects torque to all 4 wheels. When equipped with an optional Towing Package, the RX 450h can tow up to 3,500 pounds.

Testers say the RX 450h's Hybrid Drive system provides plenty of power, while the CVT ensures smooth acceleration. The 0-60 sprint takes about 7.8 seconds in the FWD Base trim, and 7.4 seconds in the AWD version. In addition, reviewers are impressed by the hybrid system's seamless transition between electric and gas modes. In most cases the transition is barely perceptible, reviewers say, unlike the systems in some other hybrid vehicles.

While the RX 450h's suspension system delivers a smooth, comfortable ride, it's not as sporty as some reviewers would like. In addition, the RX 450h exhibits some body lean in corners, due to its soft suspension. Reviewers suggest that if you're seeking a vehicle you can toss around the corners and put through its paces, you should look elsewhere. However, if you're content with a ride that coddles passengers, ably smooths out road surfaces and makes any commute a more pleasurable experience, the RX 450h fits the bill.

Lexus redesigned the RX 450h's rear suspension in 2010, upgrading it to a double-wishbone configuration designed to improve agility and control, as well as comfort. The redesign also resulted in more cargo space, since the rear wheels don't intrude as far into the vehicle. Up front, a MacPherson strut system and thick stabilizer bar complement the rear suspension. Electric power steering, which comes standard, automatically adjusts depending on vehicle speed, with greater assist at lower speeds and better feel at higher speeds. A 40-foot turning circle ensures maneuverability in tight spaces around town. Lexus equips the RX 450h with standard 18-inch aluminum wheels, although owners can add optional 19-inch split aluminum-alloy wheels with an exclusive design.

Thanks to extensive sound proofing and acoustic-laminated glass, as well as a climate control system that operates as quietly as possible, the RX 450's cabin remains a haven from the outside world. Although some reviewers find the interior color schemes a little too conservative, high-quality materials and wood trim create a welcoming, upscale environment. The front seats are well-cushioned and supportive, with 10-way power adjustment for the driver and passenger, and the rear seat slides, reclines and splits 40/20/40 for optimal functionality. Most passengers should find plenty of legroom and headroom in both the front and rear seats, although some taller owners report a tight fit.

The 2012 RX 450h received a top safety rating of Good from the IIHS, since it achieved top scores in protecting passengers during front, side-impact, rear and rollover crashes. The NHTSA gave the RX 450h a safety rating of 4 out of 5 scores, which breaks down to 4 stars for protecting passengers during front and rollover crashes, and 5 stars for side crashes.

Lexus equips the RX 450h with a total to 10 standard airbags, including side-curtain airbags and knee airbags for both the driver and passenger. A Vehicle Dynamics Integrated Management program monitors various safety systems, including the stability control, traction control, antilock brake, brake assist and hill assist systems, to ensure optimal integration and control. An optional Pre-Collision System with Dynamic Radar Cruise Control maintains a pre-set distance from vehicles in front, and makes adjustments to speed and steering if it detects an impending collision. Lexus also offers an optional rear-view camera.

Owners have mixed feelings about the RX 450h. While some call the hybrid crossover vehicle close to perfect, saying it delivers everything they expected, others call it disappointing, for a number of reasons. Some owners say their vehicles are not achieving stated fuel economy numbers, while others report they have difficulty finding a comfortable seating position, and taller owners report a lack of adequate headroom and legroom.

As far as interior build quality and comfort are concerned, the RX 450h generally receives good marks, and owners like the performance provided by the hybrid system. Acceleration is quick and smooth, they say, and the handling remains responsive. Whether the RX 450h offers the value offered by some competitive gas-powered vehicles remains a question each prospective buyer needs to answer individually.

GuruD8V7H Does this car include a rear view compass on mirror if you have the navigation system?

Have you driven a 2012 Lexus RX Hybrid?
Rank This Car

62 views with 3 answers (last answer about a year ago)

I have reset my clock after they went back an hour last weekend, but on navigation it is still one hour out. ETA is an hour ahead. Can you help. Thanks.

I Bought 2 Cars From A Dealer. How Can I Leave A Review?

How To Easily Sell My Lexus Car, Does Anyone Have Any Recommendation ?