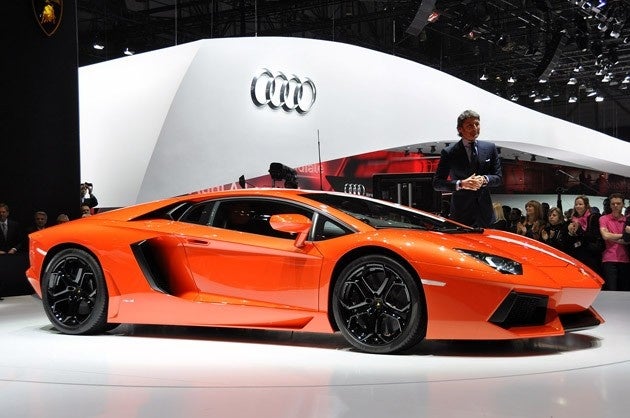 It turns out Lamborghini has been trying to build a spaceship—it just took them 50 years to get it right. I point to the carbon-fiber, one-piece monocoque in the brand-new Aventador as my primary evidence. A 325-pound tub with nary a split or seam is all that stands between you and oblivion should things go awry along the way to the Aventador’s 230-mph top speed. Of course the more natural nod goes to the aeronautic inspiration in the overall design, but I prefer to concentrate on the cockpit.

Do spaceships have cockpits? Does it matter? This one can get to 60 mph in 2.9 seconds and has all-wheel drive. Maybe if the shuttle had AWD, it wouldn’t have been retired after only 30 years. Hell, Lambo got nearly twice the mileage out of its last V12, which powered its every flagship from the Miura up to the present. Yes, the 6.5-liter, 700-hp V12 in the Aventador is Lambo’s first all-new engine since we first saw the Countach, and its first new 12-pot since 1963.

This one’s a bit different than that 280-hp, 3.5-liter gentleman’s gas guzzler, however. Slow as it may be from a production standpoint, Lamborghini has actually learned a couple of tricks over the years. Thanks to an aluminum-silicon alloy, the big mill weighs in at just 518 pounds, including forged steel for the high-heat components, and offers its 700 horses at 8,250 rpm. You’ll have to push through the 510 lb-ft of torque to get there, and they stand tall at just 5,500 rpm.

Lambo claims that adds up to a 217-mph top speed, but independent testing has revealed a higher watermark. The aforementioned 230-mph claim was made by the boys at Sport Auto, and they’ve even got video to prove it. Indeed in 7th gear the Aventador hits the 217-mph mark at just 7,500 rpm, so it has room to stretch its legs. And believe it or not, you may as well.

Of all the complaints and criticisms surrounding Audi's ownership of Lamborghini, none have been centered around the increased driveability of the bulls. Suddenly we’re finding supercars with roomy and well-positioned pedalboxes, reachable controls and useable rear and quarter windows. The Aventador is certainly still a ridiculous car to live with day to day, but testers report the seats no longer feel carved from marble, and some of the controls can be found and operated without having to pull over and shut off the engine.

Speaking of which, the start button is housed under a trick flip-up red cover, and that’s cool enough to get its own paragraph.

Yes, the company is attempting to make the V12 Lamborghini a little more liveable, but it's still aiming to push performance points as well. Sure, you can raise or lower the car by 1.6 inches with a button’s push to help clear all those nasty curbs and speed bumps, but it happens through an F1-style pushrod suspension that reduces unsprung weight and migrates everything toward the center. A nod to daily driving and a nod to manic tech and ability you’d never need on the street. Same with the transmission, a single-clutch independent shift rod (ISR) design that is lighter and more compact than a dual-clutch setup, but still delivers shifts in 50 milliseconds. It’s faster than anyone who isn’t competing for a title would need, but it’s smaller and lighter, too, and therefore more practical.

So don’t feel bad when you look at the controls and multimedia interface in your Lamborghini and notice some similarities to your buddy’s A6. Audi brought some practicality to your bull. And if you think that’s a disgrace for Lamborghini, try driving one every day.

What's your take on the 2012 Lamborghini Aventador?

Have you driven a 2012 Lamborghini Aventador?
Rank This Car