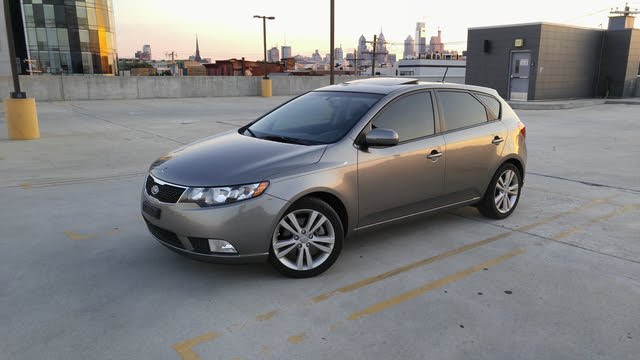 Now in its second year of production, the Kia Forte 5-Door hatchback continues to deliver a good balance of roominess, handling, performance and affordability for 2012, with a high fun-to-drive factor and a strong list of standard features.

Some owners say they're not getting promised fuel economy numbers from the 2012 Forte 5-Door, while others find its cabin noisy at times, especially when traveling at higher highway speeds.

Although still relatively new in showrooms, the Kia Forte 5-Door hatchback has started to make mini-waves in the very large and competitive compact automotive segment. Numerous satisfied owners say they drove several vehicles, including the Ford Focus, before purchasing the Forte 5-Door, not only because of its versatility, value and build quality, but also because it's fun to drive and offers a roomy, well-equipped cabin. Attesting to this fact, dealers are reportedly selling a lot of 5-Doors these days. Buyers who seek a capable hatchback as a daily commuter should do themselves a favor and take a look at the 5-Door.

Introduced in 2011, the Kia Forte 5-Door receives only a few minor updates for 2012. Based on the Forte sedan, which is currently near the end of its first generation, the 5-Door hatchback again comes in EX and SX trims for 2012. Kia adds a new telescopic steering-wheel column as a standard feature on the EX trim, and now includes a Supervision meter cluster in the optional EX Technology Package. In addition, the EX gets a new black interior color, replacing the previous year's coffee color. Finally, due to engine tweaks, the EX now ekes out an additional 1 mpg in the city and 1 mpg on the highway, bringing fuel economy numbers for its 2.0-liter 4-cylinder engine to 26 mpg city/36 highway. An optional Fuel Economy Package for the EX pushes those numbers slightly higher, to 27/37.

Outside, the Kia Forte 5-Door borrows its styling cues from the sedan, projecting clean, smooth lines with minimal fender flares and a sleek, unadorned profile, which some reviewers find a little bland. The distinctive Kia grille and swept-back headlights give the front end an aggressive appearance, while the rear end displays angled, wrapped taillights. Both trims get power exterior mirrors with integrated turn signals, while the SX also receives front foglights as well as a sport-tuned suspension. Inside, both trims come well-equipped with such standard features as Bluetooth, SiriusXM satellite radio and steering-wheel-mounted audio controls. In addition, the hatchback design ensures ample interior cargo space and versatility.

The Kia Forte 5-Door was named a Top Safety Pick by the IIHS, and the 2011 version made Car and Driver's 10 Best List. In addition, the Forte has received a number of other awards and accolades over the past few years for its overall value and economy. Competitors include such vehicles as the Ford Fiesta, Honda Fit, Chevrolet Sonic, Hyundai Elantra, MAZDA3 and Dodge Dart. A number of reviewers rank the Forte in about the middle of its class, due in part to its relatively unexciting exterior design. In addition, some competitive vehicles offer better gas mileage, a classier interior and more spirited handling. However, the Forte makes up for some of its drawbacks with its strong list of standard features and competitive pricing. 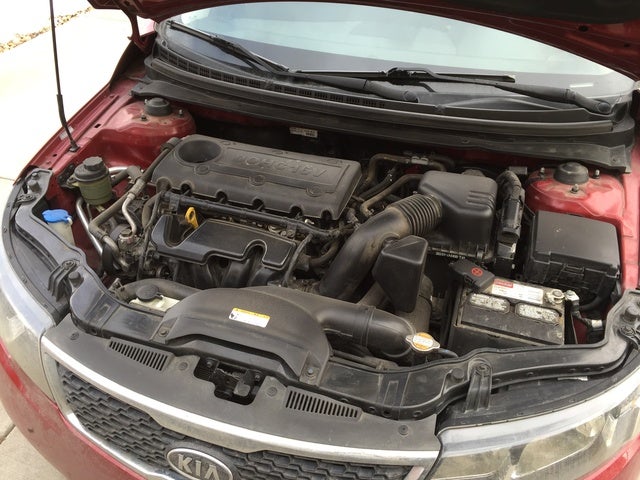 Two different engines power the two Forte 5-Door trims. The EX continues to come equipped with a 2.0-liter 4-cylinder engine, which generates 156 hp and 144 lb-ft of torque. The entry-level powerplant features Dual Continuously Variable Valve Timing (CVVT) and multi-port electronic fuel injection, which help ensure good performance and overall efficiency. The engine links to a 6-speed automatic transmission and posts decent fuel economy numbers of 26/36. In addition, the automaker offers an optional Fuel Economy Package for the EX, which includes such fuel-saving features as a smart alternator, electric power steering and low-resistance tires, as well as a number of aerodynamic exterior enhancements, which push fuel economy numbers to 27/37.

The SX upgrades to a 2.4-liter 4-cylinder engine, also with Dual CVVT. It delivers 173 hp and 168 lb-ft of torque, making for a more spirited ride. The larger engine also mates to the 6-speed automatic with a Sportmatic manual-shift feature. Kia includes steering-wheel-mounted paddle shifters for fingertip shifting. Fuel economy numbers for the larger powerplant check in at 23/32.

Although the Forte 5-Door won't win any races with either powerplant, the two engines provide a good balance of performance and fuel economy, reviewers say. They would like to see better performance from the 2.5-liter 4-cylinder engine, which doesn't quite deliver on its promise of sporty driving, and some testers say the larger engine can become noisy when pushed. However, both engines provide relatively decent acceleration, given the vehicles' affordable pricing, and provide a high fun-to-drive factor. The 6-speed automatic transmission shifts smoothly, which can make the hatchbacks seem almost zippy at times, especially during daily commutes.

The Forte 5-Door's suspension generally does a good job of handling most types of road surfaces. The front-wheel-drive hatchback features a unibody structure with high stiffness, but still exhibits some body lean in tight curves. In addition, some reviewers say the speed-sensitive, power-assisted rack-and-pinion steering can feel a little numb, especially at lower speeds. But for most types of driving, including daily commutes, the 5-Door delivers a capable ride.

The Forte 5-Door sits on an independent front suspension with MacPherson struts and a stabilizer bar, and a torsion beam configuration in the rear with monotube shock absorbers and coil springs. The SX gets an upgraded sport-tuned suspension with a tighter feel and better overall responsiveness. However, most reviewers say it doesn't quite deliver the sporty handling of other vehicles in the class, such as the Fiesta and the MAZDA3. The SX also receives larger 11.8-inch vented disc brakes in the front, compared to 11-inch brakes in the EX. Both trims feature 10.3-inch solid disc brakes in the rear. The EX rides on 16-inch alloy wheels, while the SX gets 17-inch alloy wheels.

One of the Forte 5-Door's best selling cards remains its strong list of standard features. Add in good build quality, well-made materials, smart ergonomics and attractive overall fit and finish, and the 5-Door's cabin eclipses just about anything else in its class. The front seats are comfortable, and most passengers should find plenty of legroom and headroom in both the front and second-row seats. However, some testers say the rear seats aren't as comfortable as the front for longer trips. With the second-row 60/40-split second-row seat up, the 5-Door offers 19.4 cubic feet of storage space. With the rear seatback folded down, cargo space expands to 53.1 cubic feet.

Cabin highlights include an attractive center stack and a 3-gauge instrument cluster for the EX, while the SX gets a Supervision instrument cluster with a trip computer, although some reviewers aren't fans of the gauges' red color in the upgraded instrument cluster. Cloth seats come standard in the EX, while the SX upgrades to sport cloth upholstery with red stitching. A Leather Package for the EX adds leather upholstery, as well as heated front seats and an auto-dimming rear-view mirror. The driver's seat on both trims features 6-way manual adjustment. Both trims also include remote keyless entry, power windows and door locks, air conditioning and a tilt/telescopic steering column. The premium audio system on both trims features 6 speakers, including 2 tweeters, as well as a CD/MP3 player, SiriusXM satellite radio, Bluetooth, a USB port, an auxiliary input jack and steering-wheel-mounted audio controls. The SX also gets a leather-wrapped steering wheel and metal-finish interior accents and pedals.

Owners can add a number of optional packages, including a Premium Package for the EX, which adds a power sunroof, and Technology Packages for both trims, which add a navigation system, rear-view camera and push-button start, among other features. For 2012, the EX's Technology Package also includes the Supervision instrument cluster.

The Forte 5-Door's roominess, handling and performance appeal to owners, but many say they're not getting promised fuel economy numbers from their vehicles, especially in stop-and-go traffic. However, owners find the 5-Door fun to drive, with good handling and decent performance from an affordable compact car. They also like the 5-Door's roomy, versatile cabin and comfortable seats. In addition, most owners say the 5-Door offers plenty of legroom and headroom in both rows of seats. Owners give mixed reviews to the 5-Door's exterior design, but the majority find it stylish, and some even say it's classy.

The lack of a hatchback release lever bothers some owners, as well as the limited number of interior colors. In addition, some owners say the 5-Door can be noisy at times and would like to see a quieter cabin. Overall, however, owners say the Forte 5-Door represents a good value, due in part to its good build quality and long list of standard features.

Jane I've owned the 2012 Forte5 EX auto now for 8 months, and I'm happy with the vehicle. Purchased it used from a Kia dealer w/ 27k miles, and I now already have 45k on it, with no troubles. Replaced the original tires and have had oil changes, cabin and engine filter changes. That's it. She gets average about 27 mpg with mixed driving; 30 on longer drives.