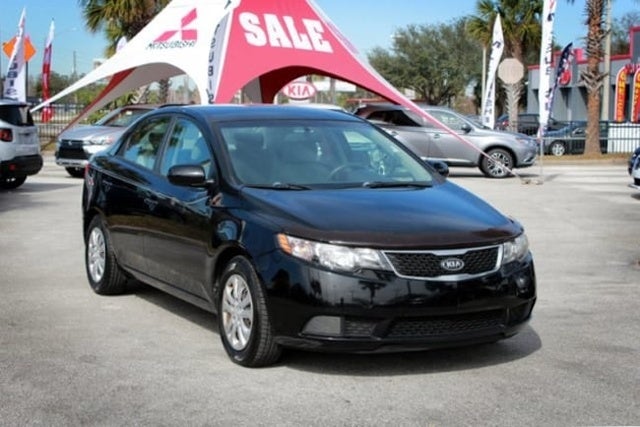 Lackluster agility in the lower trims, a rear seat that’s short on adult comfort, intrusive road and engine noise, and a pair of underpowered 4-cylinder engines indicate that the 2012 Forte is far from perfect.

Despite a few glitches, Kia’s 2012 Forte sedan packs value, front-seat comfort and cargo capacity on a pleasant if somewhat nondescript profile. Though not exactly muscular, the standard 4-cylinder powerplants offered are adequate to normal driving tasks while additionally boasting some significant fuel-economy numbers. Sure, families on a budget should check out the competition, but they ought to put this little 4-door on their A-list.

Sporting a few unexpectedly handy standard features, seating 5 people and carrying an impressive 14.7 cubic feet of trunk space, Kia’s 2012 Forte sedan packs a lot of value into its small frame. Reviewers continue to be impressed with this compact 4-door, though most admit that evolution is catching up to its aging exterior look and its underpowered 4-cylinder powerplants. Ride and handling prowess won’t win the Forte any prizes either, but one of the longest warranties on the market, as well as impressive mileage numbers and solid safety scores would indicate that budding families ought to give this compact Kia a look.

In any case, the Kia Forte is again available in three trims, the base LX, the midlevel EX and the flagship SX. Both the LX and the EX are geared toward easing the bumps in life’s roads, while the SX, with its sport-tuned suspension, displays considerably more agility and driving pizzazz. A pair of efficient if not exactly potent inline 4-cylinder (I4) powerplants equips the front-wheel-drive-only (FWD) Forte lineup, with the LX and EX each sporting a 2.0-liter I4, and the top-shelf SX packing a 2.4-liter four-banger.

Introduced for the 2010 model year, Kia’s compact 4-door sees few changes for 2012, and the more noteworthy of these affect only the midlevel EX trim. This middle-grade version gets a telescoping feature to go with its standard tilt-wheel steering, as well as Kia’s new Supervision gauge meter when the available Technology Package is ordered.

Finally, should a somewhat more refined small family or commuter car be in order, reviewers suggest kicking some tires on Ford’s highly regarded Focus, Hyundai’s classy Elantra and Mazda’s new-look Mazda3. Each of Kia’s rivals comes across as more refined and refreshed, but the Forte remains a worthy and civilized compact family automobile. 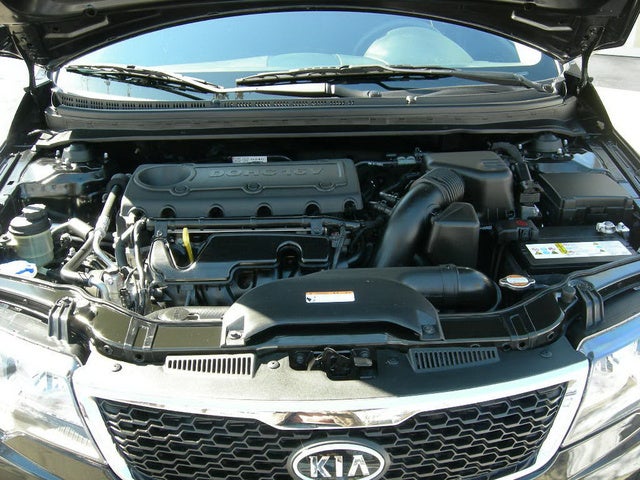 Standard power for the 2012 Forte’s LX and EX trims is a variable-valve-timed 2.0-liter inline 4-cylinder (I4) engine that puts out 156 hp at 6,200 rpm and 144 lb-ft of torque at 4,300 rpm. A 6-speed manual transmission comes standard in the base LX, while a standard 6-speed shiftable automatic transmission graces the midlevel EX and the flagship SX. Said automatic is available to the LX, as well.

Offered only in the traditional front-wheel-drive (FWD) configuration, Kia’s compact 4-door is estimated at 25 mpg city/34 highway with the standard stick-shift and 26/36 with the well-matched shiftable automatic.

A Fuel Economy Package is additionally available to the EX trim, and features low-rolling-resistance tires, aerodynamic enhancements and electric power steering for mileage estimated at 27/37.

The flagship Forte SX, meanwhile, comes with a standard 2.4-liter I4 powerplant that mates with the standard 6-speed shiftable automatic transmission for 173 hp at 6,000 rpm and 168 lb-ft of torque at 4,000 rpm. A nice touch in this top-shelf trim are the steering-wheel-mounted paddle shifters that come standard with the automatic. Mileage with this I4 on steroids, meantime, runs 23/32, according to the EPA.

Reviewers agree that neither four-banger will set any speed records, with tests showing an SX with the beefed-up I4 ambling from 0-60 in 8.8 seconds, about average for the class. A number of reviews suggest going with the 6-speed automatic transmission, noting it to be a far niftier match for the 2.0-liter four-banger than is the stick-shift, which many note as temperamental and difficult to maneuver, especially in heavy traffic. Reviewers add that both I4’s are noisy on virtually any sort of acceleration and that each continues to whine and buzz even at cruising speeds.

All three 2012 Forte trims come equipped with a front independent suspension bolstered by MacPherson front struts, complemented by a torsion bar rear end and stabilizer bars fore and aft. The LX and EX roll on 15-inch steel wheels and all-season tires, with the SX boasting 17-inch alloy wheels, again with the all-season tires.

According to most reviews, the touring-oriented LX and EX flaunt the best ride comfort and bump absorption, while the sport-tuned SX rides a bit harsher, though not unpleasantly so. Virtually all reviewers, however, opine that none of the Forte’s editions can quite match the competition in overall ride composure.

Though reviewers seem unimpressed with the handling virtues of the LX and EX trims, all agree that the sportier SX demonstrates at least a modicum of driving excitement. Cornering prowess is described by most reviewers as all but nonexistent in the two lower Forte trims, while the SX is noted to be considerably more nimble.

Finally, brakes in the 2012 Forte sedan lineup are found by most reviewers to be above average, with stopping distances from 60 mph averaging an impressive 120 feet. One review, however, found its tested Forte SX to suffer from an uncomfortably grabby pedal.

Standard amenities endowing the 2012 Forte are on par with what one would expect in an affordable compact sedan. The base LX comes with cloth upholstery, a manually adjustable 6-position driver’s seat, split-folding rear seats, tilt-wheel steering, air conditioning and a single-CD player with 4 speakers, satellite radio and a USB connection. Bluetooth hands-free calling is also standard aboard the entry-level Forte LX, something you don’t often see in other base trims in any class.

Finally, the sport-tuned SX gets premium cloth upholstery as standard equipment, not to mention a trip computer, a leather-wrapped steering wheel, and leather and simulated alloy cabin accents.

All Forte trims are eligible for an available auto-dimming rear-view mirror with a compass and universal remote garage door opener, as well as carpeted floor mats, a rear deck spoiler and a number of trunk organizers. Forte EX and SX trims, meanwhile, can be delivered with optional remote engine start, and, in the EX, an available Technology Package that sports the new Supervision gauge meter display, as well as push-button start, a navigation suite, automatic front climate control and a rear-view camera. The Premium Package, also available to the EX, boasts a power sunroof and 16-inch alloy wheels, while the SX trim is further eligible for the available Leather Package, with heated leather-trimmed front seats and an auto-dimming rear-view mirror.

Reviewers are generally complimentary toward this Kia sedan’s cabin materials and workmanship. Rear-seat room is, however, noted to be a bit cramped for 3 adults, while all 4 doors are described by many reviewers as a bit small for easy entry and exit. Generous head- and legroom in front, even with the optional sunroof, is complemented by a fairly high driving position that reviewers say aids in all-around visibility. Finally, reviewers rave about this compact sedan’s plethora of cabin storage and its surprisingly spacious trunk.

As a 2012 Top Safety Pick, the Kia Forte lineup gets the Insurance Institute for Highway Safety’s (IIHS) best score of Good in all its testing criteria.

Meanwhile, the National Highway Transportation Safety Administration (NHTSA) gives the Forte its second-best 4-star rating in overall safety, with front and side crash tests as well as rollover protection all receiving 4 stars. 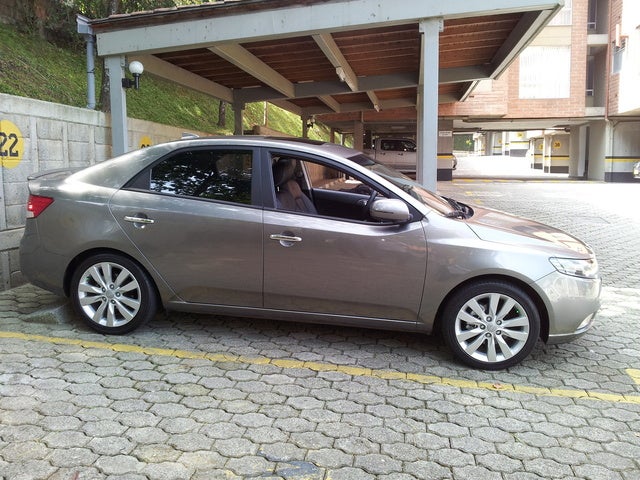 Owner opinion of the 2012 Kia Forte lineup is generally quite favorable. Those glitches that are mentioned, however, include complaints about underpowered I4 engines, the somewhat exorbitant cost of the SX trim and some low-rent interior materials. Road noise and engine racket come in for a share of owner discontent, as does the fact that the Forte seems a bit less refined than most rivals. Finally, some contentiousness regarding the Forte’s somewhat dated design doubtless reflects personal taste, as opposed to any serious qualms on the part of Kia’s design team.

For the overwhelming majority of Forte owners, on the other hand, Kia’s compact family sedan represents the epitome of value, safety and quality. The SX is given additional kudos for its fun factor, while all trims are lauded for roominess, trunk space, fuel economy numbers and, in the higher trims, the plethora of standard amenities. Lastly, owners are especially effusive in their praise for the Forte’s extra-lengthy warranty protection.

Users ranked 2012 Kia Forte against other cars which they drove/owned. Each ranking was based on 9 categories. Here is the summary of top rankings.

Have you driven a 2012 Kia Forte?
Rank This Car

Searching For Vehicles That Within My "preapproved" Vehicles

I clicked on the "start shopping" after being preapproved, but the only cars that come up are the same cars that i am trying to trade in also

How Do I Take The Plug Out The Blower Motor

I am replacing the blower motor on my 2012 kia forte. I just need tips on how to take the plug out of the blower motor. Do I just pull it out or do I need to wedge a flat head in a certain side to ...

refillingfluid wont drain into fill plug on top of transmission

drives good but its making a ticking sound